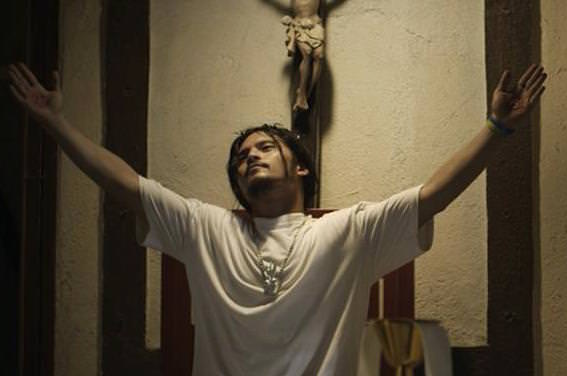 PAUWI NA MOVIE REVIEW: Just when I thought that Birdshot would easily be my favorite film for Pista ng Pelikulang Pilipino, along comes Paolo Villaluna’s Pauwi Na. It disrupted my lineup, and made it harder for me to decide which one would be at the top of my list.

A poor family who lives in the slums of Manila wishes to go back to their province to live a better life. They cannot afford to ride the bus, so they take their chances and pedal their way to the province by riding two pedicabs. An ailing father, his tough-talking wife, a cigarette-vendor daughter, a thieving son, a blind and pregnant daughter-in-law (who occasionally has personal conversations with Jesus himself), together with their dog named Kikay, are what makes up this unlikely road trip. As resilient as they are, the family realizes that the road to home won’t be easy, and even with Jesus on their side, sacrifices are necessary.

The Pauwi Na indie movie is apparently inspired by real life events, when director Paolo Villaluna read in the news about a family in Quezon City, who tried to get home to Leyte by travelling on a pedicab. Unlike its real-life counterpart though, we never find out in the film where the family is headed. It was never mentioned which province they’re travelling to, or how they will find it in the first place. The province, it would seem, is more of a symbol of hope for the family, than an actual physical place. They travel to find redemption, to escape their current predicament. It is this glimmer of hope that gives them the endurance to survive.

But Pauwi Na does more than just show us a family on the road. It gives us a sneak peek of the reality of the underprivileged. Travelling for miles on a pedicab might seem like an absurd idea for many, but it is the reality of the urban poor. Just like how having one pack of noodles for a family of five to share for dinner, or go for days without a proper shower, or living under a bridge seem unthinkable for the privileged.

Despite the fact that we are literally just watching a family pedal on the road, Pauwi Na’s storyline is strangely engaging. Every chapter through their journey has something to offer to the audience that disturbs, inspires, or stirs. The presence of the rather unconventional portrayal of Jesus also adds an element of mystery and a certain degree of shock value.

Other than the plot, the best part of the story is the acting performances of the lead cast. With a stellar lineup, it’s no surprise that the portrayal of the lead characters was moving and effective. It’s not hard to imagine them as an actual family who were just picked-up from the streets to portray the roles.

Needless to say, Pauwi Na is a must-see movie. It’s heartbreaking yet inspiring at the same time. Other than being a family drama, the film is a reflection of our society; one where impoverished would cling to whatever glimmer of hope is present, regardless if it’s real or not.