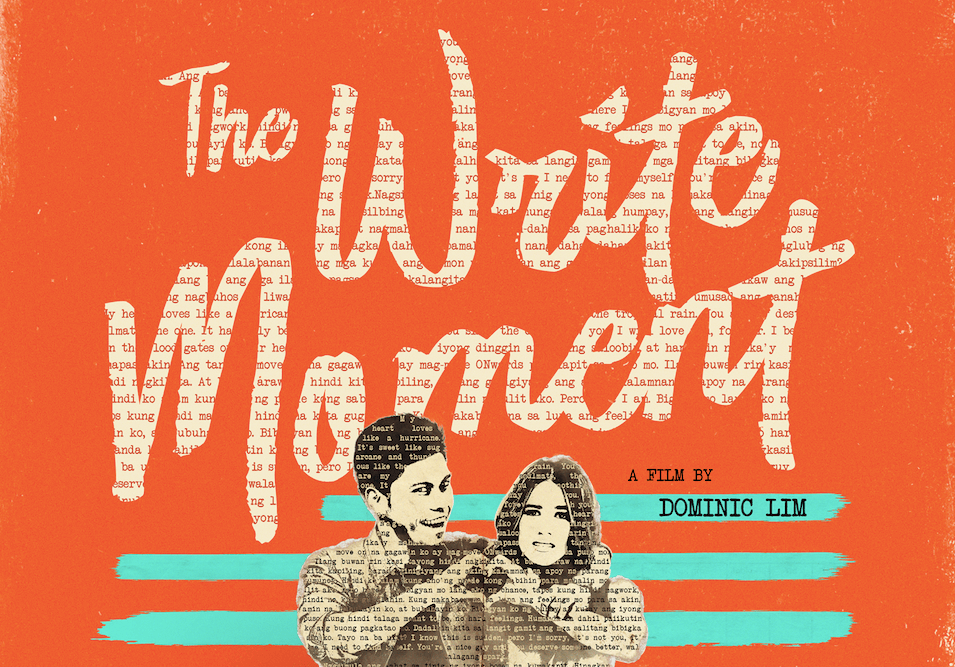 The Write Moment Movie Review: The quirky romcom offering of the 2017 QCinema Film Festival, THE WRITE MOMENT had a few right moments where it appears as a fresh, new approach to the romantic comedy. It struck a chord that is rarely as satirically touched upon by local romcoms – the whole banality of romantic tropes, of a fairy tale romance. If only it weighed down on the clichés that made it another flash-in-the-pan quirky indie romance, trying to follow in the footsteps of 500 DAYS OF SUMMER.

THE WRITE MOMENT glides with romcom flair but it is uniquely rendered in a fantasy element that echoes GROUNDHOG DAY and ETERNAL SUNSHINE OF THE SPOTLESS MIND. Jerald Napoles and Valeen Montenegro play lovers who become entrapped in a cyclic scripted existence after a random breakup. Turns out, the man’s bittersweet script is brought to life and he must be able to get all the lines and cues right to be able to skip the repetitive “takes” and accomplish his plans with the girl who left him.

Its premise guarantees an engaging first act that’s anchored on Napoles and Montenegro’s effective chemistry and comedic timing. Their candid approach to the lines was spot on, and the film itself allowed both actors to stretch around performances that underlined a noteworthy subtlety over melodramatic touches. In fact, the film initially struck a well executed balance that gave way to a slow descent into melancholy, especially in the case of Jerald Napoles who really shines as the film’s tragic romantic hero.

It is also the clever play with a meta/fantasy element that gave way for fascinating “what if” moments like the hilarious love scenes, and a gruelling continuation of “happily ever after” where the whole world seems to be always sunny that two people managed to engage to one another.

The film dwells on a self-reflexive nature on screenwriting, which the film failed to live up to. The muddled second act takes the film downhill into the very clichés of romantic comedies it first appeared to make fun of, unfolding its promising meta narrative device into disappointing conclusions. The film’s faults extend to its misogynistic tendencies, as it slips into the pitfalls of its fellow quirky romcoms suggesting the “Manic Pixie Dream Girl” in the female character is but an object to the desires of the weepie protagonist.

This Would be the Most Disappointing Thing About the Deadpool Movie

Many films have tried to subvert the tropes of the local rom-com and “hugot”, and much like the repetitive takes in WRITE MOMENT, these films are only entrapping themselves within the conventions. But given these qualities, THE WRITE MOMENT is worth watching for this attempt, and probably for featuring what the “hugot” subgenre offers best – an appealing set of leads. If anything (and contrary to the film’s rants) “kilig” is their only major achievement.

Thank you for reading The Write Moment Movie Review. For other QCinema Film reviews click here.