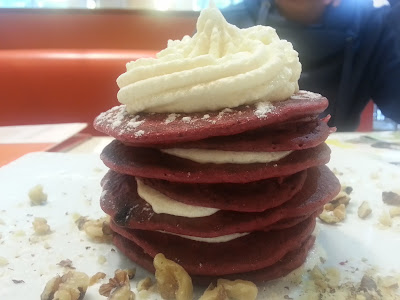 I had high hopes for this one.
Just like what it said in the menu, if you can’t choose between a cake and a pancake, this is one way for you to indulge in both. There has been a fad going on for anything red velvet. From red velvet cakes, to red velvet sandwiches, and even red velvet flavoured ice creams, desserts based on this “flavour” have suddenly been popping up on menus. I have to admit though that I have also fallen into this bandwagon, gravitating towards the red velvet desserts when I see one. The best one I’ve tried so far (yep, even after I’ve tried these pancakes) is the Red Velvet Sandwich of the Maginhawa branch of Moonleaf Tea Shop (check out my review here). It was so good I enjoyed it more than the milk teas.
With Ihop opening just recently (check out my review here) there has suddenly been a craving for pancakes, I can tell by the long line of people patiently waiting to get a table outside Ihop every day. With the red velvet trend going on and the current craze for pancakes, a fusion of both would really seem like a good idea. I thought so too, that I had to get out of my way to visit the Bonifacio High Street branch of Pancake House to try this much talked-about Regal Red Velvet Pancake. 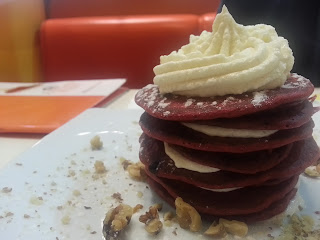 I was getting a little impatient because it took them too long to give my order, given that it’s my only order and only about 3 tables were occupied that time. My aggravation vanished when we already had our pancake. It was beautifully done! The actual dish really looks like how it is shown in the billboards so ten points for that. The size though is smaller than I expected (there’s always a catch isn’t it?). It’s made up of several layers of pancakes, smaller and thinner than the usual ones we know. Check out the picture below to get an idea of its size.
See also
geoffreview·
Food
·November 23, 2016

It did have the bitterness and sweetness of red velvet. It’s got hints of chocolate inside and according to the lady who served us, the pancake itself was prepared using Hershey’s chocolate cacao powder. The best part is the Frostee, made from Pancake House’s powdered sugar. However, in spite of it qualifying into the red velvet category, that’s all that it did and there’s nothing special about it. It’s no different from the other red velvet desserts I’ve already tried, except that it’s got walnuts maybe. It didn’t give me that delightful feeling I had when tasted Moonleaf’s Red Velvet Sandwich, and I gobbled it all up feeling just neutral about it. I can imagine this dying out soon when most people have already tried it out. 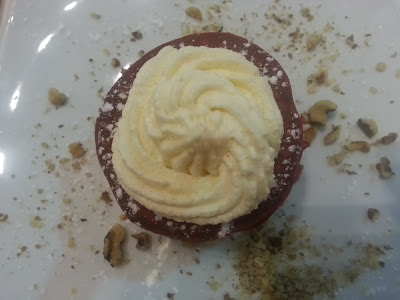 Like I said, I had high hopes for this one, given the fact that this is a fusion of the latest food fads and that the idea is somehow original. The Red Velvet Pancake’s price in the menu is Php 218.00, but prepare Php 236.00 because there’s an 8% service charge (don’t you just love surprises?). Apparently, this is one of Pancake House’s series of Designer Pancakes, so we can probably expect more creations to come around.