The UP Repertory Company, in its 44th Theater Season, opens in the streets. In the wake of extrajudicial killings and social media, the local slums are once again on the spotlight, and UP Rep’s Intersection offers these two new, fresh plays to a bewildered urban audience.

A tale about exterminators and their moral dissonance, or maybe even an attempt to articulate a national dilemma at a time when vigilantism and state perpetrated killings are on the rise. 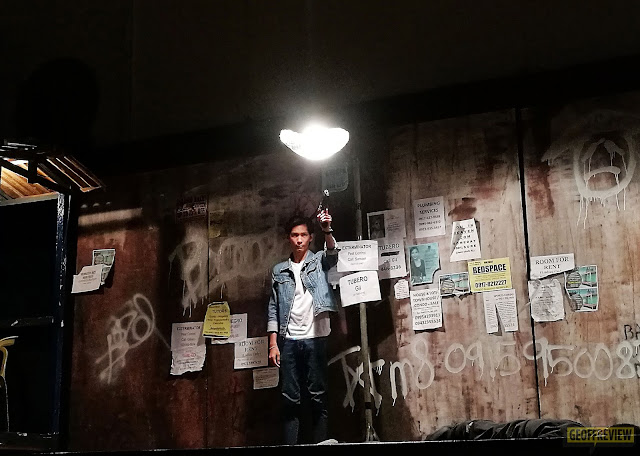 Set in a dark alley with flickering lampposts, Mix Villalon’s Streetlight Manifesto unfolds as bodies are dumped in front of a police outpost attracting a newbie journalist. Behind these killings are assassins who are not afraid to spill out their vulnerabilities and existential crises. Streetlight Manifesto tries to paint the spectre that haunts both the urban allies and our collective conscience.
From the daily anarchy sponsored/encouraged by the State, we are forced to rethink of the motivations of a cold blooded gunman for hire. Do they kill for money alone? Are they prompted by principles of justice? Or they themselves embody a nation desperate for a blank slate?
Street Manifesto will not answer them for us. Like the awkwardness it solicits, we will only be left hanging. Instead, I believe it disturbs the undisturbed. It prods our (in)sensitivities in a world who has grown a little too comfortable with bloodshed.

And where do allies lead? To the deep intestines of the slums. No lampposts here, only cramped spaces that people call home. Eskinita’s dark humor banks on the congested, lingers in the uncomfortable, and relies on the crowded habitat of the urban poor. Retold from Elyrah L. Salanga-Torralba’s short story, UP Rep never fails to depict controversial satires out of tragedies. 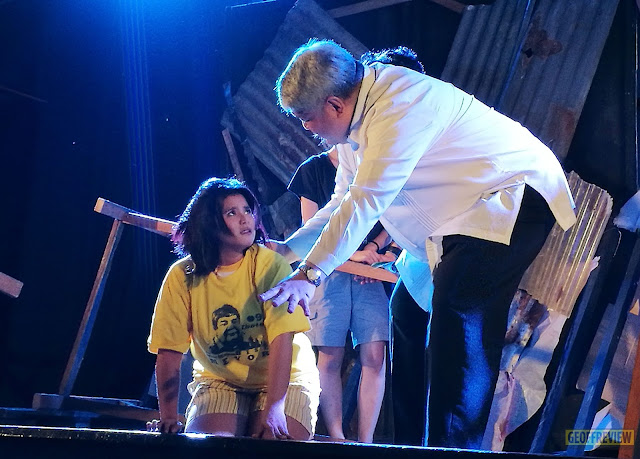 Eskinita is set in an all too familiar urban landscape of barong-barong houses and limited spaces unclaimed and to the mercy of development projects. The narrative revolves around a manicurist whose dead husband’s remains have been immovable in the narrow straits of the community. Her undying goal: to finally bury her husband and put an end to the “walang hanggang lamay” (eternal wake). But tragedy is best told not only through the dead but the sufferings of the living. Eskinita caricatures a trivial ordeal of a widow into a journey about a people captives of superstitions and condemned as collaterals of those in power.
The interplay of Filipino beliefs about the dead and the funeral traditions that comes with it have been greatly utilized. Illusions of the civilized, modern and practical urban people will always be shattered in a society where people are violently driven out to the cities from the countryside. From the ocean of feudalism, generations of landless rural people are displaced to the urban centers and with them they bring layers of superstitions, vestiges of a backward and feudal culture. Eskinita was not only successful in capturing that nuance but also in exaggerating characters such as the traditional politician to the beholden people, the man-god to his blind followers, the master to his slaves.
See also
geoffreview·
FoodReviews
·May 25, 2016

Truly, we can find these same recurring themes of poverty in our literature, in the independent films decorated with recognizations abroad, and recycled telanovelas but the strength of Eskinita, as a play, lies in its ability to be a direct social commentary without trying too much.
Sometimes, simulations of the city grime and humanizing the people of the slums are what we need at a time when a war is being waged against the poor.

Maybe the best way to remind us that these are all real and it’s never okay. 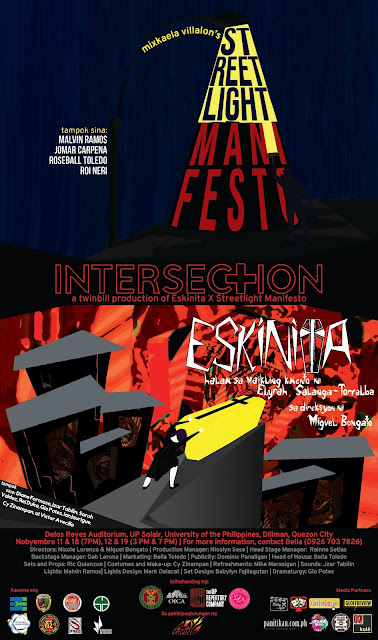