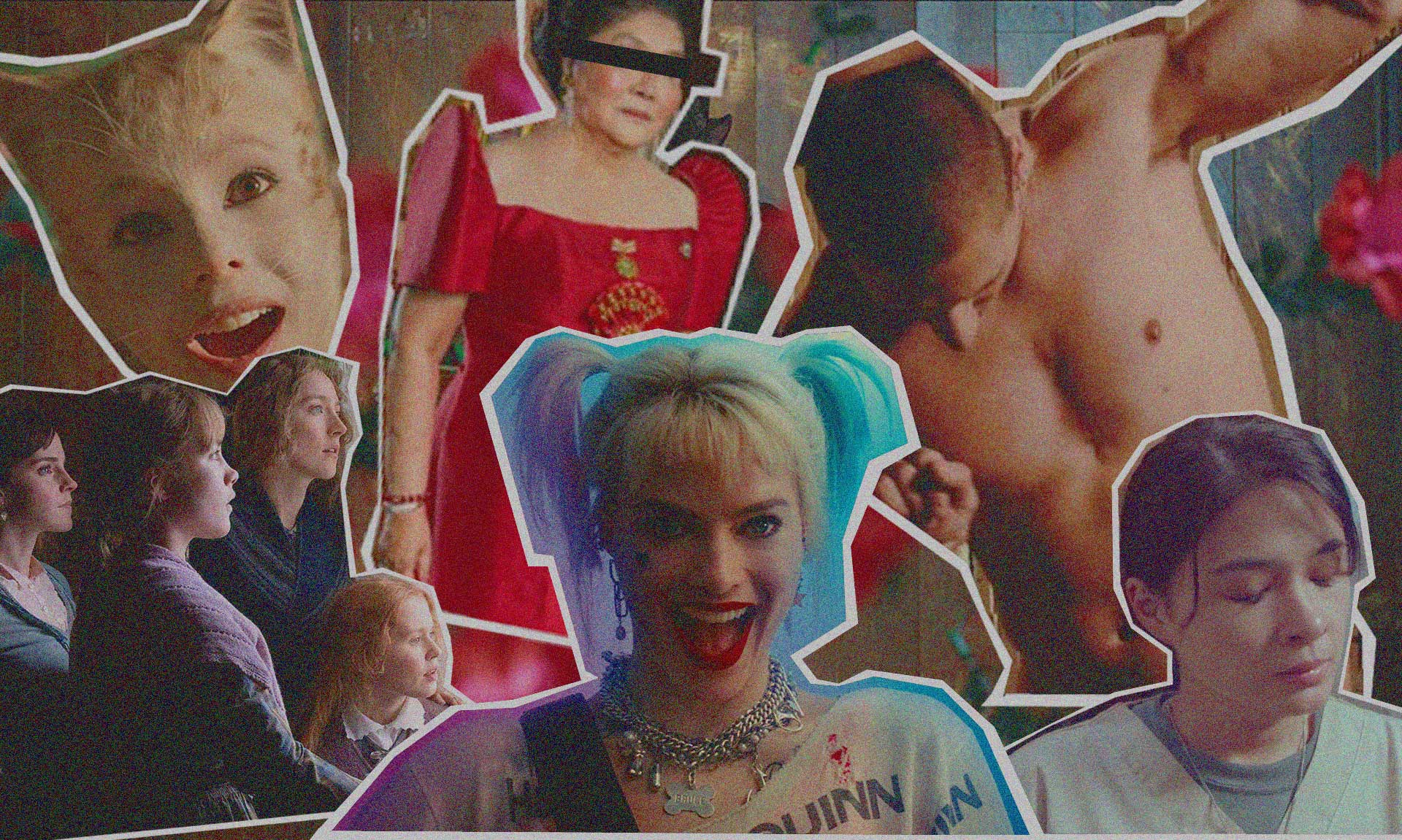 Welcome to the Monthly Movie Log! It’s our one-page report where you’ll see our short-takes, reviews, and reactions of the Unreel Team to the films we have covered within one month.

So far, 2020 has been both kind and cruel to us when it comes to films. On one hand, there are the must-see movies such as Lauren Greenfield’s controversial documentary “The Kingmaker”, the DC Extended Universe’ “Birds of Prey”, and Leigh Whannell’s “The Invisible Man”. On the other, we have those which made us want a refund, namely Tom Hooper’s “Cats”, Jeff Wadlow’s “Fantasy Island”, and Yam Laranas’ “Nightshift”.

We also made time to catch up with some films from 2019 – Greta Gerwig’s “Little Women” and Peter Strickland’s “GU04”.

Our first movie log this year will merge the January and February entries. See our pocket reviews below:

OVERVIEW (Click the link to jump to the review):

Greta Gerwig’s Little Women captures the complexities of the women in Louisa May Alcott’s classic tale with purpose and prudence. Greta Gerwig, herself a writer, understands not only the story but also the history of Little Women. Her film, a fresh adaptation of the 1868 classic, is also a necessary tribute to Louisa May Alcott.

One cannot also help but admire the production design put into the film. The old colonial house of the Marches has a lived-in quality that radiates affection amid genteel poverty. There is a recognizable exuberance throughout the film rarely captured in the adaptations of classic novels. But it is the precise writing and strong directorial hand of Greta Gerwig that elevates the film into instant classic status. The non-linear approach enhances the story, sharpens the themes, and adds depth to the characters. – Jowana

Peter Strickland’s three-minute short film as a “brilliant” and “literal deconstruction” of masculinity. And not just such an unspooling of it, but one which is presented in “playful stop-motion, gay erotica reverie.” – Armand

I have three reactions on the screen adaptation of Cats: why, why, and why.

There is no reason to film Cats other than to demonstrate a cautionary tale on modern filmmaking. Director Tom Hooper assembled a star-studded cast, shot them in motion capture, and here conjures one of the most fascinating nightmares I ever had.

Cats is a confusing, poorly designed, shoddily edited film adaptation. Tom Hooper previously directed Les Miserables and just needs to make The Phantom of the Opera to complete the mega-musical trifecta. I am not a fan of Mr. Hooper but hopes he bounces back in his future. But if he opts to dip his toes in the outlandish musical adaptation pool once more, I suggest he rides the Starlight Express.  – Jowana

Dark Waters is a positively dreary affair that takes its audience into the tedious process of case-building and the oppressive realities of court battles.

Most legal thrillers are slick productions with brash lawyers engaged in electrifying courtroom scenes. Dark Waters, in contrast, is a dreary affair that takes its audience into the tedious process of case-building and the oppressive realities of court battles. By the end of the film, you will leave the theatres admiring Robert Billot (Mark Ruffalo), hating corporations, and throwing out your non-stick frying pans. – Jowana

Yam Laranas’ latest is riddled with empty thrills and uninteresting inquiries about death. it feels out of touch with any sort of reality—including its own—that of the few frights that it does land, none of them feel rooted.

Past the second arc, you squirm at the prospect of a red herring, partly because it’s so obvious that you’re right, and that if you are, it isn’t going to be good. When it unfurls to the true monster that it is by the third act, you recognize its fangs and claws. It’s a feral little beast that nibbles at the film that could have been—a ripe concept that fritters its promise in its own prevailing ambivalence. -Armand

I have made peace with the incredible premise of disaster films a long time ago, so I am quite comfortable suspending disbelief about South Koreans stealing nuclear weapons in North Korea to prevent a volcanic eruption. Ashfall intends to dazzle the audience with Hollywood-style action and effects, nothing more and nothing less. But it proves once again good actors can make mediocre films somewhat bearable. -Jowana

Even if it shows a filmmaker with unquestionable talent past his prime, Clint Eastwood in his latest film, Richard Jewell, seems to feel unmoored from any responsibility of telling a truth-based story.

The likely takeaway of moviegoers, though, oblivious of the poor treatment of Scruggs (Olivia Wilde)  is that it’s a decent film – and it is for the most part. Reshaping stories to fit a political narrative is a sorry form of historical revisionism and our heroes deserve better. -Jowana

Urgency of the Undead: A “World War Z” Review

You can tell that “Onward” is a personal film – A story about two teenage elves going on a quest to bring back their deceased father for a chance to talk to him for one day. Director Dan Scanlon himself shared at the Berlin International Press Conference that his own life inspired the film, having lost his own father at a young age.

Somehow, it feels like this personal story has been re-molded to fit within the generic Pixar formula. I guess this formula worked, because overall the film is still an enjoyable family movie.

I just wished that we got a chance to explore more of its fantasy-meets-familiar world. Despite its structure being built around going on quest, there isn’t much world-building, and we don’t get to explore how modernization merges with magic. -Geoff

Confusing. That’s it. That’s the review.

But seriously, even for a movie about an island that makes your fantasy come true, a lot of things don’t make sense. Even the forced “plot twist” didn’t help. Can I have a refund, please? -Geoff

“Birds of Prey” achieved what “Suicide Squad” did not. It’s a fun mix of chaos and comedy that did not hold back in its R-rated glory. It could very well be DC’s own version of Deadpool, with its central character’s penchant for violence and breaking things – yep – even the fourth wall.

The fight scenes though require a willing suspension of disbelief. At one point, our badass girl group, with nothing but bats, fists, and roller blades, takes down a bunch of bad guys armed to the teeth high-grade guns and explosives. Despite this, the confetti-clad fight sequences are no less entertaining. -Geoff

Lauren Greenfield’s The Kingmaker is a one-of-a-kind portrait of the fiendish claws that have long had its grips on our neck as a nation. An equally incisive companion piece to Ramona Diaz’s 2003 doc, Imelda, Greenfield’s film funnily abandons any and all intent to give its subject a chance to repair its irredeemable image. This happens halfway through the film when Imelda Marcos notes that what others might call being excessive to her is “mothering”. But you see, Greenfield, also not the imbecile Imelda seems to mistake everyone to be, recognizes the schemes of her devising. The key takeaway of her film, after all, is that to all of Imelda’s felonies, the former first lady’s only arrogant response is: “They did not find any skeletons in my closet—only beautiful shoes.” – Armand

Despite what people are saying about its trailer giving everything away, I still find Leigh Whanell’s new film, The Invisible Man, to be an absolute delight. You see, though its promotion hints at a #MeToo-fication of H.G. Wells’ classic, it burrows itself deep into something more universal. And though its sci-fi whodunnit elements are nothing to leave one floored, The Invisible Man‘s takes are, however incisive, prudent. It warns us of a tale we’re all familiar with, one where the snake’s mouth catches up to its own tail, eating itself alive. The vicious cycle of viciousness works to unshackle you from the very thing that makes you human, and that’s in full-display here, with Elisabeth Moss’ career-best performance as Cecilia, Whanell is telling a tragedy as old as time without ever feeling out-of-date. – Armand