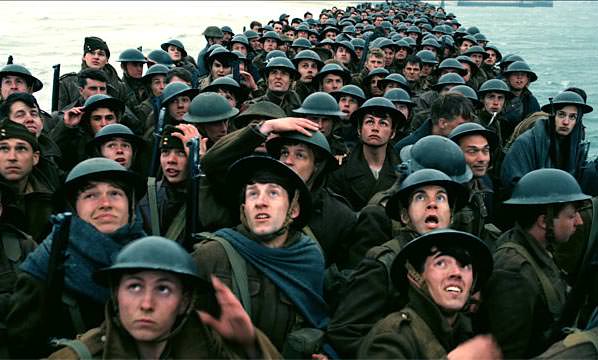 Dunkirk Movie Review: DUNKIRK marks Nolan’s first foray into the war epic. By now he has explored multiple genres with remarkable mastery. And while comparisons with Stanley Kubrick remain inevitable, the scale of his productions is rather reminiscent of the works of David Lean. Like the latter, Christopher Nolan’s DUNKIRK does a fascinating job of placing large ensembles in picturesque landscapes and letting the whole thing produce a quite lengthy but visceral cinematic experience.

DUNKIRK doesn’t ever stray from its anecdotes of war. It alternates between the aerial, land and naval milieu to elaborate the evacuations of Allied soldiers to Dunkirk, France during WWII. In the film’s breathtaking introduction (admittedly one of Nolan’s best opening scenes), the viewer is transported immediately to the very heart of a siege, allowing us to empathize on a combatant’s tiresome and desperate venture. What follows is not one but multiple (and often confusing) tales of struggle, defeat and heroism, rendered by scenes that seemingly produce ticking timebombs to put its characters in breathtaking situations they must survive.

Going through the whole film feels like survival itself. Nolan orchestrates his brass band like it was also at war – from the wall-to-wall Hans Zimmer score, to the cascading sound and visual effects, to huge exploding sets (count all the capsizing ships and falling planes) and finally to the brisk and busy editing. It’s quite a restless film, and the lack of any coherent pace can be quite a nuisance. At some point, the narrative becomes hard to follow because of this, and even the slurred English of its characters may demand subtitling.

But still, DUNKIRK doesn’t fail to shine in the right places – Tom Hardy does a fine job as an air force pilot. With his masked visage, the almost wordless and isolated performance was the most memorable. The younger actors also engage in the film’s more challenging scenes in a small ship, echoing Wolfgang Petersen’s DAS BOOT in its claustrophobic paranoia of a doomed vessel lost among enemy lines. Harry Styles’ sudden jolt as captain, who began pushing around his fellows to their deaths out of desperation, is his most convincing turn (Nolan apparently wasn’t initially aware of his star’s One Direction fame). But what would always be remembered in DUNKIRK is Hoyte van Hoytema’s cinematography, as he seems to honor the vastness of the war epic on celluloid with a masterful use of color.

Unlike most examples of the genre, Nolan is keen not to delve into historical facts and accounts that his audiences can easily Google. Instead he intrigues with spectacle, and most of DUNKIRK’s moments can ultimately pass as colossal dramatization. But that’s of course in attribution to Nolan’s cinematic achievements. A few days ago, he was the talk of netizens for his remarks against NetFlix and its process of distribution. Nolan appears as the leading patron of the cinematic experience, of big screen entertainment that positions itself apart from the 2000s superhero blockbusters (which Nolan also pioneered) to create a somewhat dignified epic – a refreshing take on a genre cineastes may have long forgotten.

But with its visceral offerings, Nolan elevated and transformed a rare historical account with the sheer power of moving images – not only showcasing the power struggles of imperial nations with grand scenery, but also reminding us of war’s casualties in the film’s small gestures and silences. DUNKIRK may even revive its relevant genre in a period of impending war and revolution.