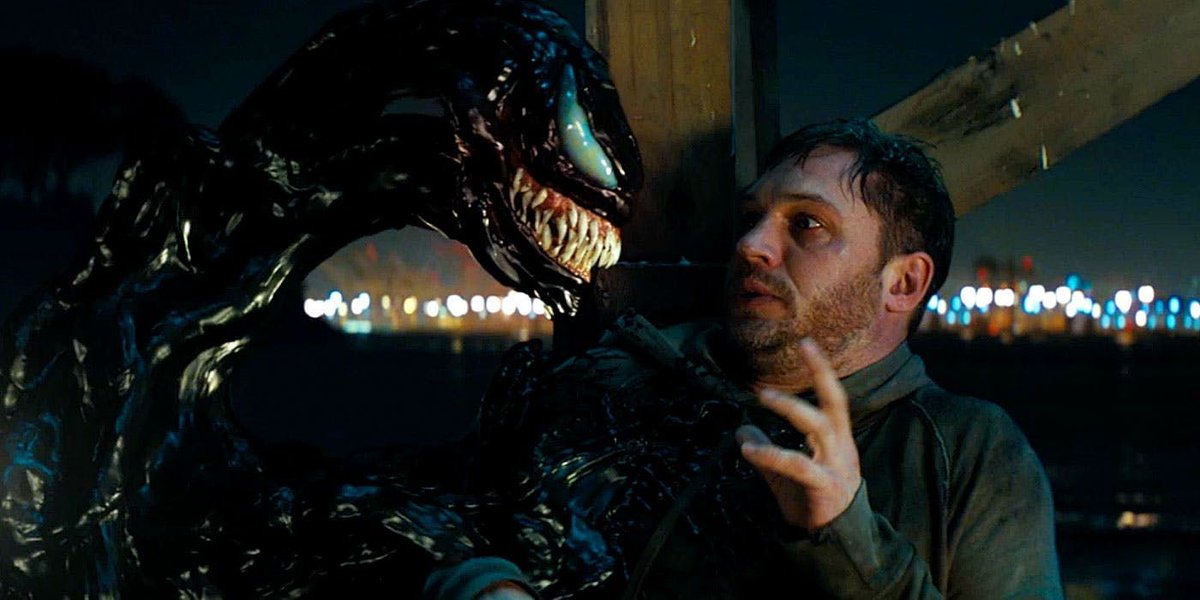 Spare me the whole ‘perpetuating mediocrity’ speech. My brain receptors have yet to bite the dust. I know Ruben Fleischer’s “Venom” is an irrefutable mess.

And you know what? I want more of it.

I can’t point what it is exactly—Tom Hardy’s signature disheveled dumdum, the film’s sheer tenacity of even pushing through production, or the memes that are bound to spring from its viscous existence—but no one of sound mind will disagree that the film should resonate with viewers, “Spider-Man” fans or otherwise. Maybe not in the profound ways its contemporaries have, like “Black Panther” or “Avengers: Infinity War”, but say this, if anything, about “Venom”: it will most certainly, unapologetically stick.

Tom Hardy plays Eddie Brock, a news vlogger with purely idealistic intentions, perfectly sculpted Abercrombie & Fitch physical features, and annoyingly dank-ass journalistic standards. His “pursuit” leads him to L.I.F.E. Foundation’s turf, headed by a young megalomaniac Elon Musk-type, Carlton Drake, played by Riz Ahmed. As it happens, Drake has—very poorly— imported cylinders of slithering extraterrestrial parasites called ‘symbiotes’ from outer space. He says he wants to cure cancer using said lifeforms or whatever, but he says it with as much conviction as you’ll hear me saying I will take the high road and actually hit the bench-press today, so…yeah. Well. O.K.

Eddie obviously calls bull, tries to slander Drake in his online show, and in return, loses everything in his life including his girlfriend (Michelle Williams, easily the best part of the film). In a fit of rage and desperation—”six months later”, as the title says so casually, oblivious it seems as to how it drastically throws off the movie’s already pompous pace—B&Es his way into the scientific institute, at which point the Venom symbiote thrusts and fastens itself to his perfectly chiseled body.

That symbiosis spins into a whole cat-and-mouse chase that is the film’s second half, littered so with many campy setpieces and—when you can actually follow it—decent action. In the midst of all that, there’s pulpy and juicy parasite-host banter between Eddie and symbiote, a back-and-forth worked admirably by Hardy, who pulls the lever on his most “look, I’m just a handsome guy who lost everything but still looks ravishing and hulking under his hoodie” special. It’s great and all, but it does little in making Brock a subject to waste more than two hours on.

Fundamentally, “Venom” is conjured to kick-off a Sony’s own mini-empire of comic book I.P.s. And in that light, it’s tough to vouch for a film that fails to address who its titular character is. The question that’s straddled on the back of Fleischer’s mind-numbingly trite but surprisingly delightful anti-“Spidey” kickoff film, is this: Who is Venom without Spider-Man? Surely there’s more to him than “liking it here” because here on earth, he’s “not a loser”.

The screenplay, co-written by four screenwriters of varied styles and pedigrees, is stock and uninspired, riddled with some of the peskiest tonal shifts to give you whiplash from four different directions. Reviewers will—harshly—point you Pitof’s infamously horrendous “Catwoman” as a reference to the new film’s quality, and to some extent, they’re right. The writing here is perfunctory, the characters poorly imagined. There are plenty of things Sony and its filmmakers have missed on this one, but one thing that “Venom” is not, unlike “Catwoman”, is boring. Eating live crustaceans? Check. Making melodramatic bible references? Check. Michelle Williams serving severe trench coat fashion? Check, check, check!

But the biggest punchline, at least for this film, happens in the first sixty seconds of the reel. Marvel’s iconic logo flashes, as it gloriously zooms out to reveal its totality. Sitting atop this logo, in clear, crisp, white text, it says: “In association with”. Surely the critical derision “Venom” will take will be far bigger than that strip of text, but if I were Marvel, I’d bestride this un-marvelous but unforgettable train Fleischer & Co. has invariably jumpstarted.

When Eddie Brock acquires the powers of a symbiote, he will have to release his alter-ego “Venom” to save his life.