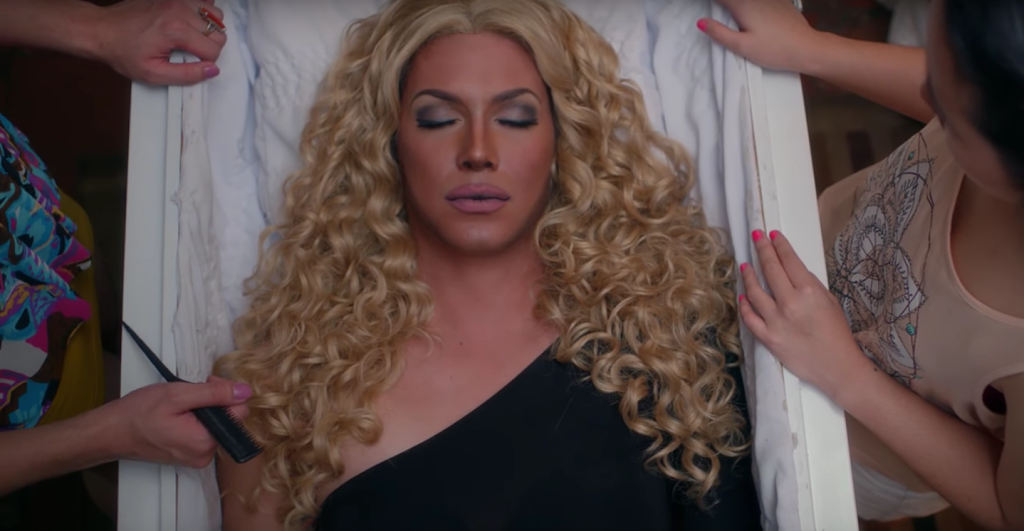 (As I type, I feel even this review is an understatement to the near-perfection of Lana’s latest film. But anyway, here goes…)
There is no doubt that Jun Lana’s masterpiece DIE BEAUTIFUL is the 2016 Metro Manila Film Festival’s crowning jewel. Following a decade of laughing stock LGBT characters (one even attempted to fuse them as quadruplets), it is a golden moment to watch a film about transwomen that makes you feel all sorts of genuine emotions. And to think it dared not to be too preachy, too melodramatic — hell it didn’t even try too hard to turn the tables from what seemed like an endless surge of Vice Ganda-Wenn Deramas slapstick. DIE BEAUTIFUL achieved the impossible at this year’s MMFF, and it now seems clear that a change in local cinema is fast approaching, at least as long as the festival is concerned. 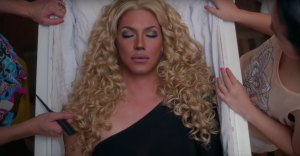 The film is about the undying friendship between two “konteseras” (or beauty contest “byukon” regulars) Trisha and Barbs, and how Barbs recounts their joys and struggles growing up as transwomen in a two-faced community. Lana’s comedy-drama delivers not only the prized local gay humor but also a surprisingly moving pathos, just the way a gay man like me goes through life as it is for us in the LGBT community. And not only individuals from the spectrum can relate to this film. Naysayers now must be ashamed and scratching their heads for putting down this year’s entries for not being “too Pinoy”, “pangmasa” or even “pampamilya”. All those traits are donned like a costume and brought to the spotlight in the life of Trisha. And it should be said that DIE BEAUTIFUL bears not only a brilliant storyline, it was also extremely brilliant in execution.

The other reviews can attest to the film’s scrumptious quality from start to finish: the picturesque framing and non-linear editing along with the splash of colors from the brilliant production design are nothing short of spectacular in presentation. Viewers ought to be made of stone not to appreciate the make-up and prosthetics and the countless costumes that will make Broadway blush. And in the middle of this spectacle are the great ensemble players, with Paolo Ballesteros, Christian Bables, Gladys Reyes, Joel Torre, and Lou Veloso leading the race for the awards night. Even the special appearance of Eugene Domingo and Iza Calzado are pitch perfect. 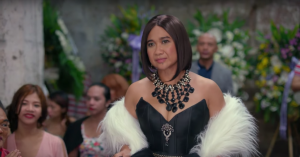 Much has been deservedly said about Christian Bables’ performance as Barbs. I’ll take full credit for these cliché remarks but it is in fact a revelation and a starmaking turn. It’s even an understatement to limit Bables to a mere supporting role as it is slowly revealed that he provides enough gravitas to be considered the film’s unspoken hero(ine).
Undoubtedly, the fascinating result that is DIE BEAUTIFUL can be attributed to its three main forces on top of their game – Jun Lana, Rody Vera and Paolo Ballesteros. Coming from a string of successful films BARBER’S TALES and ANINO SA LIKOD NG BUWAN, Lana seems adept in crafting films attuned to the times as he claims this latest effort was inspired by slain transwoman Jennifer Laude. The same can be said for playwright Rody Vera whose Martial Law-themed INDIGO CHILD is already being hailed as the year’s best one-act play, and DIE BEAUTIFUL is a worthy follow up to his equally brilliant screenplay for Loy Arcenas’ REQUIEME!. Both the direction and the dialogue veer away from heavy melodrama and slapstick to showcase a subtle melancholy behind the flashy presentations of beauty contests and make-up gimmicks. This is well exhibited in the very moving exchange between Gladys Reyes and Christian Bables as they decide who will take the beautiful corpse. Any other director would extremely intensify such a poignant turning point in the film, but I’m glad it fell to the rightful arms of Vera and Lana.
See also
geoffreview·
Movies
·July 14, 2013 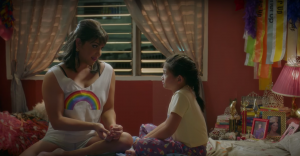 And finally, their combined effort was given face by none other than Ballesteros whose trendy make-up transformations found home in the poignant story. Having been popular nowadays only as a loyal Dabarkads sidekick, Paolo Ballesteros gives a surprisingly celebratory performance. Along with Bables, the chemistry between Trisha and Barbs makes up an unforgettable onscreen duo. It’s an iconic performance at par with Eugene Domingo’s turn in the SEPTIC TANK films, and his iconic beauty contest answer will resonate until it’s one of the most quotable lines in local cinema. But most importantly, he transforms to the chameleon Trisha Echeveria, embodying the centuries-long oppression towards gays and trans, the happy-go-lucky streetsmart fighter this society demands us to be, and the heart and soul of a struggling individual who means well to himself, to friends, to family and to society at large, pushing his limits with whatever means he can – may it be a strenuous beauty contest, a make-up sideline, building a Technicolor shelter, or giving a man a blowjob or a nosejob. 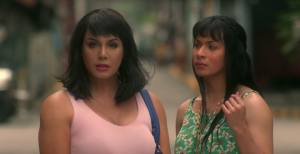 Ultimately DIE BEAUTIFUL is not only one of MMFF’s best films, it will live long enough to be on top of this decade’s greatest movies. Find yourself moved, shaken and happy such a film now exists.
Rating: 5 / 5
Credits to the images and videos used in this post go to “Die Beautiful”, MMFF, and/or to their respective owners. We do not own these materials. No copyright infringement intended.