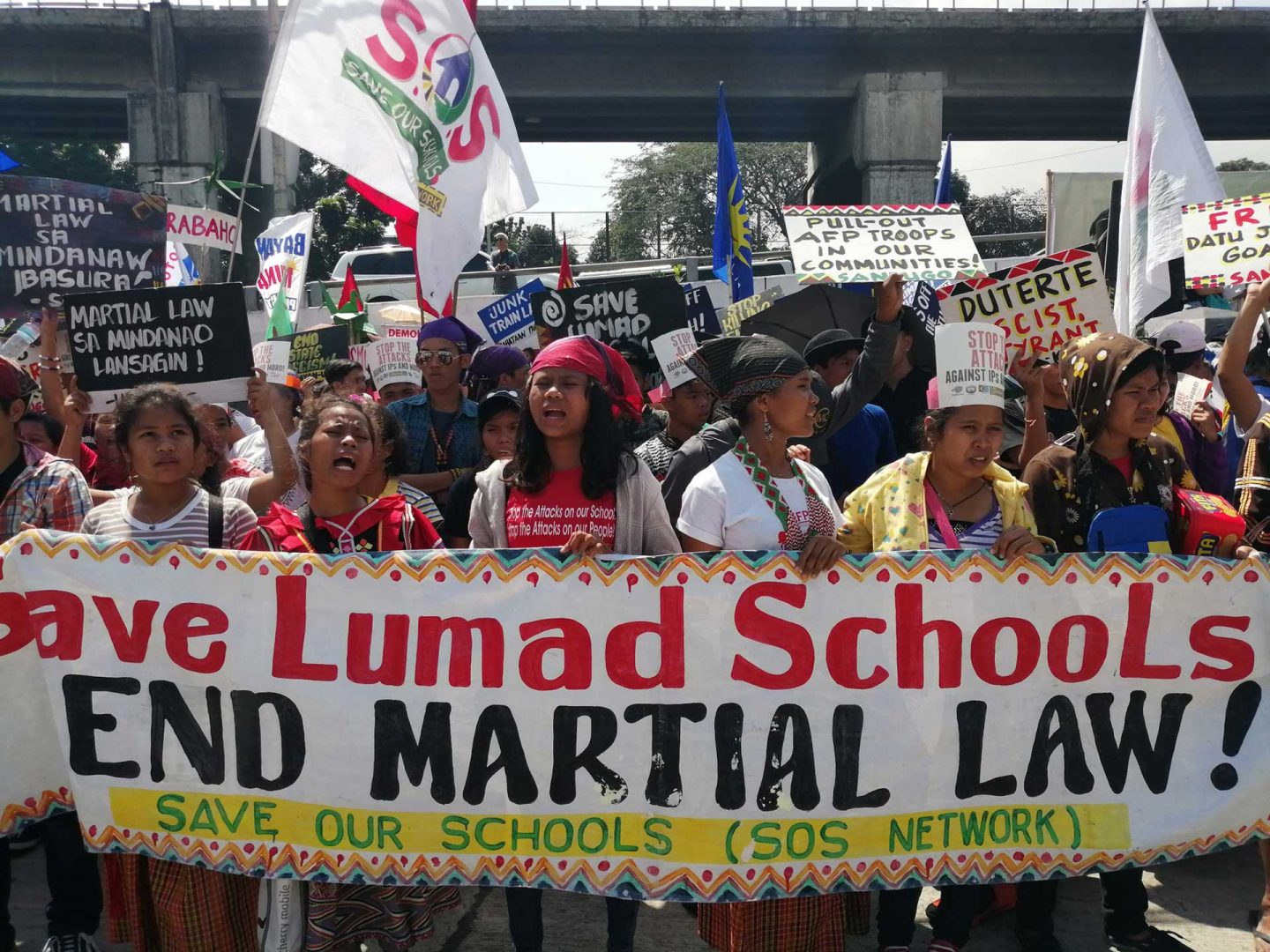 In “Bullet-Laced Dreams”, filmmakers Cha Escala and Kristoffer Brugada show the hardships that Lumad Children from Mindanao face, as they flee from armed conflicts and get separated from their families; and their fight to preserve their indigenous way of life.

The film debut last October 2 at the Daang Dokyu Festival of Philippine Documentaries. It is well-timed as the Philippines observes October as the National Indigenous Peoples Month. It also had its World Premiere at the Global Visions section of this year’s DMZ International Documentary Film Festival in South Korea.

Bullet-Laced Dreams puts spotlight on the struggle of the Lumad

Bullet-Laced Dreams revolves around the right of Lumad children to education; the hardships they face as they flee from armed conflicts and get separated from their families; and their fight to preserve their indigenous way of life.

It follows 14-year-old Chricelyn Empong.  She and her classmates flee from their ancestral home after paramilitary groups ransacked their school and murdered  tribal leaders and school heads.They move from place to place and end up in Manila, where they pursue their studies and protest for the end of Martial Law so they could go back to their ancestral home.

According to the directors, the film aims to put a spotlight on another war the government is espousing. “The world knows about Philippine President Rodrigo Duterte’s war on drugs. But he also declared war against our indigenous tribes.  He proclaimed on national television ‘I will bomb your area’.”

These stories, the directors add, are not given the right attention by the public.  By documenting these stories, they feel they were able to record a piece of Mindanao’s violent history, and hopefully, compel people in better situations to act and speak on their behalf.

More stories from the tribes

Chricelyn’s is one of the many stories of Indigenous People’s (IP) struggles Daang Dokyu is presenting.

It also presents a 1914 film, Native Life in the Philippines by Dean Worcester.  The film is an archival record of how the director tried to secure United States colonial government support in keeping control of a colony of “primitives”, and to argue against independence.

Howie Severino’s 1999 documentary, Pagbabalik Sa Tribo is also part of the festival.  It documents the actual and psychological journey of filmmaker Auraeus Solito back to his cultural roots in Palawan.

The Remontados and Dumagats ofSierra Madre are the focus of two other films in the festival – Sabangan (1983) by Jose Cuaresma, Frederico Espiritu, B. Libres, R. Gruta, and  L. Fisher and Dam Nation (2019) by Grace Simbulan.

Both films, of different time periods, focus on the IPs’ objection against the Kaliwa-Kanan Dam, which may flood 300 hectares of forests and communities in the eastern Sierra Madre mountain ranges, destroying their means of living.

Siyanan (2017) by Summer Bastian brings us up north with a look into the disappearing traditions in Bontoc, Mountain Province.Siyanan takes up where the sons of Lumawig, the supreme deity of Bontoc-Igorots, left off in the quest of finding their father/cultural hero.

These films are part of the festival’s Ecology section, which carries the theme “Ang Lahat ng Bagay ay Magkaugnay”.

According to festival programmer Adjani Arumpac “This section maps the identity of the Filipino people from our colonial cinema heritage to the current resistance of Filipinos. It establishes how the fight for the land is not just a skirmish in the margins, but a part of a bigger historical narrative of Filipinos fighting against the age-old exploitation of our human and natural resources. The operative word is fight but it is shown in many ways through these documentaries–as reflection, as looking back, as poetry, as truth, as longing, and as a continuing past.”

The section has eight more films that debunk the dangerous notion of Filipino resiliency through narratives of individuals and communities in the face of tragedies and calamities. These are Glimpses of the Culion Leper Colony and of Culion Life (1929) by Merl La Voy; Balikbayan #1: Memories of Overdevelopment Redux VI (2017) by Kidlat Tahimik; Sabangan (1983) by Jose Cuaresma, Frederico Espiritu, B. Libres, R. Gruta, and L. Fisher; Balud (2014) by Francis Solajes; Ang Pagpakalma Sa Unos (2020) by Joanna Arong; Tungkung Langit (2013) by Kiri Dalena; The War We Were Not Taught About (1994) by Jin Takaiwa; and Bird Hunt (2019) by Atom Araullo.

“The oldest documentary in the Daang Dokyu collection is Dean Worcester’s Native Life in the Philippines (1914) followed by Glimpses of the Culion Leper Colony and of Culion Life. These are documentations of the Philippines by colonizers, made to serve their purposes. The section maps how the gaze of power transferred from the colonizers to the local. The Filipino seeking his identity is apparent in Balikbayan #1 and Pagbabalik sa Tribo. This sense of identity as fealty to the land is the core of resistance represented in many ways in the documentaries Sabangan. Dam Nation, Siyanan, Birdhunt , The War We Were Not Taught About and Bullet Laced Dreams. Alongside these documentations of resistances are documentaries (Pinatubo, Balud, Ang Pagpapakalma sa Unos, Tungkong Langit) of the Filipinos coping with recurring natural calamities in the country.” adds Arumpac.

Screening of the Ecology  section is from October 2 to 8 at DaangDokyu.com/watchnow.