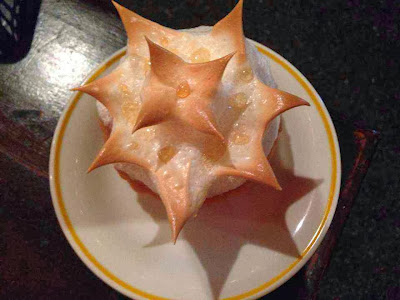 It has been a while since I’ve seen one of my good friends so last weekend, we decided to check out El Chupacabra in Felipe St., Makati. When we got there, we waited to be seated since the place was already packed at the time. While standing in line, I took the chance to be judgmental and observe the place a bit. The restaurant is quite small. Some seats were set in the road, which felt more authentic when it came to eating street tacos right? There were murals on the walls that represented Mexican culture. The crowd was mixed (didn’t expect it to be). There were AFAMs and their lady friends, conyos with their fine clothing and wine, hipsters with their beanies and beers, and those whom I don’t know how to judge yet. Normal people, I guess? 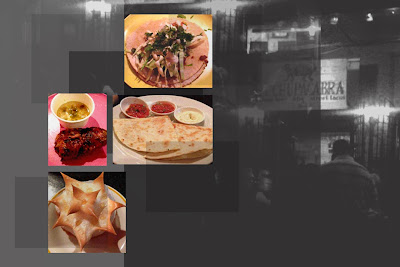 We were seated in a small table right beside the grill. So, imagine how we smelt after leaving the place. Being first-timers, we tried their best-sellers-the Carne Asada and Camarones a la Diabla – both soft tacos and some beer. The soft tacos were perfect for just one person, but my friend and I shared them both. Since they’re soft tacos, soft tortias were used as the shell. So, don’t expect the crunchy nacho-like version we’re used to. The Carne Asada was very good. The meat was tender and seasoned just right. The onions gave it the right crunch and spice, while the cilantro balanced everything out and the Calamansi gave it a slight zing. The Camarones a la Diabla soft tacowas served with cabbage, cilantro, and mayo. Now, this was very hoooooooot! So hot, that we were forced to order desert just to get rid of the spice, but I’ll talk about desert later.
We felt that the soft tacos weren’t enough to get full and ordered Al Pastor Gringas. Gringas is a type of Quesadilla, and Al Pastor is a type of spicy beef. If the Carne Asada soft taco was very good, then I fell in love with the Gringas. The meat wasn’t spicy at all. It had more various seasonings in it which made the taste stronger, but still tender and juicy. It worked well with the cheese and other condiments creating a perfect balance of crunch, sourness (with the salsa), tangy, and richness (also heat if you put in some of their hot sauce). Our last savoury order was a piece of Chicken Skewer. It was served with vinegar as its dipping sauce. The chicken was hot and juicy with a smoky rub frequent in Latin American cuisine. This is the type of dish you wish you had a cup of rice right beside you. The type of barbecue I wish was being sold in every street corner.
Earlier, I mentioned something about desert due to the fact the Camarones a la Diabla wreaked havoc in my mouth. The sweets they offered us was a Butterscotch Pie. When it got to our table, I immediately thought of a jester hat, because of its spiky meringue topping or an alien spaceship tart. It tasted like a Brazo de Mercedes turned tart. The crust was too thick and my friend thought it was too dry. It wasn’t bad but I’d rather have ice cream. At least it released us from our misery.
The service was fine. It took a while for us to get our food, maybe because the place was crowded with a lot of customers? You get the drill. I just wished they didn’t set up a table too close to the grill. It got hotter and we smelled like Mexican food after. Overall, the dining experience was vibrant! The food was delicious, the crowd, despite the differences, had a common ground-everybody just wanted to eat and have a good time.