Write Your Own Story: A “The Book of Life” Review 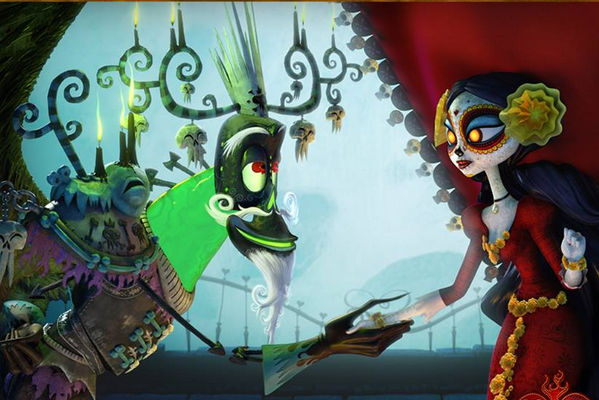 Do you want to hear a story fit for Halloween?

I know you’ve already heard a lot of stories about the dead, but the one that I want you to hear (and see!) would be different. You see, this story comes with a wager made by gods of death. Yes, some of the characters die, but as you might expect from a story about Halloween, they don’t stay dead. But that’s not what’s unique about the story that I wanted you to see. What’s distinctive about this story is that fact that it is not just about death, but also about love. A love story that came right from The Book of Life.

The Book Of Life Trailer

“The Book of Life” reminds me of The Nightmare Before Christmas – only more vibrant and festive. They are both stories of the dead walking among the living, told in a lovely style of animation that brings the characters to life in a way that’s both cute and creepy. But what would you expect? This is a Guillermo del Torro produced movie after all, there has got to be some element of the uncanny embedded somewhere in the film.
But “cute” and “creepy” don’t give justice to this film. It is a rich tale worthy of being folklore, but one that can be a bedtime story at the same time. It was fast-paced and funny, thanks to the well-written script which was dashed with a few puns (“that’s a whole lot of bull!”) and a good amount if humor that appeals both to the kids and the kids-at-heart. What’s more, you’ve got a bunch of interesting characters portrayed by equally energetic voice actors. Nobody in the movie was dull – even the townsfolk who are really just at the background most of the time had their own distinct, quirky personalities that you don’t really see them as mere supernumeraries. My favorite characters though were the gods La Muerte and Xibalba – don’t they just remind you of Aku from Samurai Jack and Sally from The Nightmare Before Christmas?

But those are not the only memorable parts. This story about passion comes with an awesome soundtrack composed of kickass songs like “Creep” of Radiohead and the classic “Can’t Help Falling in Love” by Elvis Presley, among others. It’s a bit of a struggle not to sing along but good thing I was able to manage…until I got home that is.

The Book of Life works as a Halloween movie, but one that the whole family can enjoy. It won’t give the kids sleepless nights, but it’s still memorable enough for the whole family to be talking about it even after they have left the cinema.

Credits to the images, synopsis, and materials  used in this post go to “The Book of Life” and/or to their respective owners. .I do not own these materials. No copyright infringement intended.