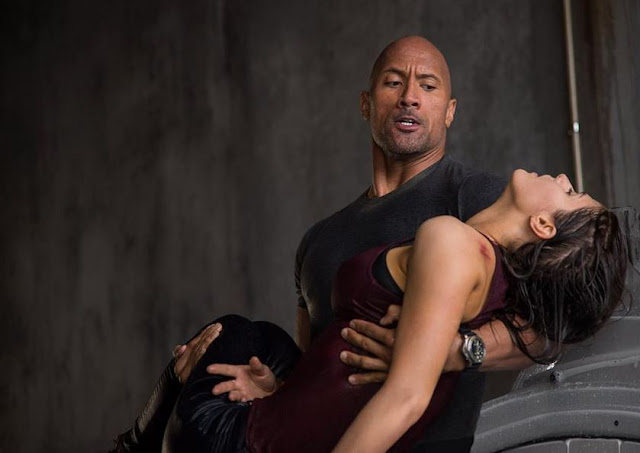 This is one timely movie, given the paranoia here in the Philippines right now of a possible earthquake. This gives us a good picture of how an earthquake of this scale might look and feel like.
The San Andreas Fault starts to shift, causing a 9.1 magnitude earthquake that leaves major cities in chaos. Amidst all the rubble, firefighter Raymond ‘Ray’ Gaines (Dwayne Johnson) does everything in his capability to rescue his family. Just when they thought that the disaster is over, a more devastating catastrophe looms.

It’s been a while since I’ve seen a good disaster film, and I’m fond of them because they have this certain charm that comes from making us feel really small and showing us what mother nature does when it’s payback time. It is also this fascination that made me enjoy San Andreas even though it didn’t really have anything new to give, as far as disaster movies are concerned.
It’s got everything that a typical disaster movie has to offer:
·         The expert who nobody listens to, until tragedy strikes and he gets his “I told you so” moment.
·         The hero, who always has his family to mind while he does his hero duties.
·         Arial shots of prominent landmarks and huge buildings getting wrecked up.
·         The Jerk, who often ends up dying.
·         The love interest
·         The “You thought it’s all over but wait there’s more” circumstances.
See? Nothing new here. Thing is, in spite of San Andreas lacking some manpower in the creativity and originality departments, it still ends up being loads of fun just for the spectacle and hugeness that disaster films give us. No matter how many times I see scenes of buildings crumbling down and massive debris squashing terrified civilians, I still cringe at the helplessness and inevitability of it all. Maybe it’s the acrophobic in me talking.

It’s also interesting to see humanity falling to the mercy of Mother Nature regardless of social status and discrimination. San Andreas featured some filthy rich characters who are nonetheless powerless when faced with the wrath of earthquakes or tsunamis. Everyone blends in with the crowd of chaos, and all trivial worldliness becomes insignificant. It’s true that the characters who survived, did so with the help of resources which are only available to their social class (I don’t know own a chopper that I can use in case of an earthquake), but not without some assistance from lady luck.

If there was anything irksome about the film, it’s going to be the sloppy insertion of family drama in the most awkward situations. We have scenes where we expect the characters to be panicking because hey, everybody’s life is in danger, but instead they reminisce of the past and raise marital issues. The heck.
***
San Andreas doesn’t offer anything different we haven’t already seen in earlier disaster films, but it’s entertaining nonetheless.

Credits to the images and videos used in this post go to “San Andreas” and/or to their respective owners. I do not own these materials. No copyright infringement intended.