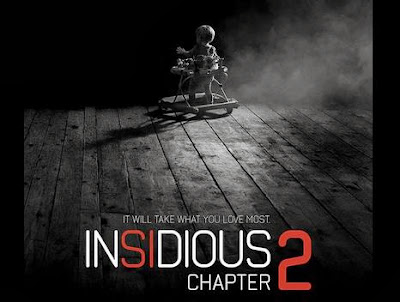 This is the reason I have a bad feeling about sequels.
Just when Josh (Patrick Wilson) and Renai Lambert (Rose Byrne) thought that they can finally move on with the traumatic experience they had with their son’s astral projection abilities, horrifying things start happening again in their home. Convinced that the whatever happened to their family in the past is not yet over, Lorraine, Josh’ mother, decides to ask for help. She gets in touch again with Carl, Specks, and Tucker, colleagues of the psychic Elise who has already helped their family in the past. As they try to uncover the truth behind the continuing haunting in the Lambert family, they find out that they’re dealing with an entity completely different from the one they have encountered in the past.

I had really high expectations for the second chapter of Insidious. I’ve already mentioned in my previous posts that the first Insidious movie is one of the scariest suspense films that I’ve seen so far – not to mention that I loved their out-of-the-box idea of having astral projection as the concept on which to anchor the premise of the film. It was unique, well thought of, and effectively scary that you’d definitely hope that a sequel could only make it better. Unfortunately though, it was the other way around.
For me, Insidious Chapter 2 only ruined the premise of the first movie. The horror of having an out of body experience that has been established by the first Insidious film was turned into lame ability that can be done and undone by the characters at will.  This movie also made the dead and the spirits more humanized in this film that it sucked out the fear of the unknown, which is an important element in movies about evil spirits, if you ask me. Instead of being a horror movie that can get your freaked out because of the unworldly things that are happening in the plot, the film felt more like a serious version of Ghostbusters, where the main characters where just investigating the paranormal occurrences and solving them Scooby Doo style. Speaking of Scooby Doo, I’d like to have special mention for the embarrassingly failed attempt at humour of Leigh Whannell and Angus Sampson as Specks and Tucker. They were trying too hard to be funny that I started pitying them.
The film also relied a lot on startling the audience to exude that scary vibe. Okay it may startle you every now and then but that’s it. There was nothing about the movie that was memorable enough to make you leave the lights turned on when you go to sleep.
Okay I know it’s starting to sound like Insidious 2 is a horrible movie but please, don’t get me wrong. It didn’t suck that much, it was just okay – it’s just that I enjoyed the first film so much that I had higher than usual expectations for this one. There were also good points like I loved how there were smooth transitions from the real world to the spiritual dimension (called the “Further”), and how the film was able to cleverly weave the present and the past. Sadly though, if you look at the film as a whole, it still didn’t measure up to its predecessor.
The first Insidious film is already included in my list of favourite horror / suspense movies – which was why I was really hoping to have as much, if not better, enjoyment from its sequel. Sadly, I was disappointed but hey, the ending of the second Chapter are giving off hints of a third movie, so let’s just hope it gets better the third time around.
Patrick Wilson as Josh Lambert
Garrett Ryan as young Josh
Rose Byrne as Renai Lambert
Ty Simpkins as Dalton Lambert
Lin Shaye as Elise Ranier
Lindsay Seim as young Elise
Micheal Jackson as Lorraine Lambert
Jocelin Donahue as young Lorraine
Steve Coulter as Carl
Hank Harris as young Carl
Leigh Whannell as Specs
Angus Sampson as Tucker
Andrew Astor as Foster Lambert
Danielle Bisutti as Mother of Parker Crane
Tom Fitzpatrick as Bride in Black / Old Parker
Tyler Griffin as young Parker
Directed by: James Wan

Credits to the images and videos used in this post go to “Insidious 2” and/or to their respective owners. I do not own these materials. No copyright infringement intended.