Veterans on the Loose: A “RED 2″ Review” 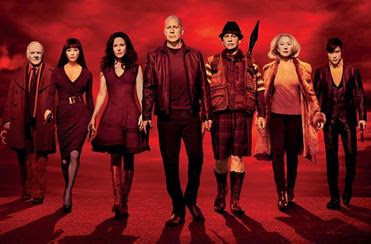 This movie has got the best things that I love about movies – humour and action. And lots of it!
Inspired by the comic book series of the same name, Red 2 is the sequel to the 2010 film RED. Retired CIA agent Frank Moses (Bruce Willis) tries to live a peaceful life with his girlfriend Sarah (Mary Louise-Parker) when he is approached by his former CIA colleague Marvin Boggs (John Malkovich). Marvin believes they are being hunted down for participating in a secret operation during the cold war. With America and their former CIA buddies at their heels, the trio are on the run, but as they do they find out that their lives might not be the only ones at stake, but the lives of millions of people as well.

At first look at the plot you may get the impression that this is just going to be one of those typical Bruce Willis action flicks. But believe, there’s a lot more enjoyment in this film than what you think. There is fun embedded in all the action that goes on, at some point the characters even felt like a bunch of kids goofing around with the big guns they just happened to have.
What I liked the best about Red 2 is that it is the kind of action film that is not too emotionally exhausting. Sure, there’s a lot of shooting and killing going on, but the movie approaches these sequences in such a way that it becomes amusing. There’s wit and cleverness in the script, made more effective by the casual way that the characters deal with all the killing.
I also loved the movie’s unpredictability and spontaneity. A lot of twist and turns happen as the storyline progresses and this helped a lot in keeping the excitement level up. The movie does this effectively, in such a way that you don’t lose track of what’s going on in spite of the randomness of the events that take place and the juggling around of the motives of the characters.
Speaking of the characters, I loved their uniqueness and how each of them played a special part in the team. I enjoy movies where distinct characters, each with their own specialty, join together to accomplish a certain goal. All the actors did a great job in making each character quirky and distinct, although I also thought that there were parts where Bruce Willis and Mary Louise-Parker were trying a bit too hard to be funny, unlike John Malkovich who was a natural at what he does. Lee Byung-Hun and Helen Mirren were favorites during action scenes, their performance left me feeling badass even after leaving the cinema!
Red 2 makes action more fun by adding wit and humour to the recipe. It was unpredictable, action-packed, and spontaneous. This is the kind of action movie that you enjoy not just because of the all the shooting and big explosions, but because of the cleverness of the whole movie as well.
Bruce Willis as Frank Moses

Brian Cox as Ivan Simanov
David Thewlis as The Frog
Neal McDonough as Jack Horton
Credits to the images used in this post go to Red 2 and / or to their respective owners. I do not own these images. No copyright infringement intended.