Urgency of the Undead: A “World War Z” Review 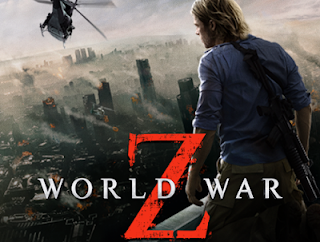 Now this is one zombie movie I’d like to talk about! Not some sappy, illogical, blasphemy to the zombie apocalypse genre *cough warm bodies cough*. Now don’t get me wrong here, I’m not one of those zombie purists but dude I’m telling you, if there’s any movie that can probably go closest to how it might feel like when there is actually a zombie apocalypse, World War Z is the best example that we got.
Based on the novel of the same name by Max Brooks, World War Z follows former UN investigator Gerry Lane (Brad Pitt) as he goes to several countries, trying to investigate and trace the origins of a virus that caused a zombie outbreak all over the world. With the help of the UN and experts that he meets along the way, Gerry finds out that the virus’ strength must just also be its own weakness. 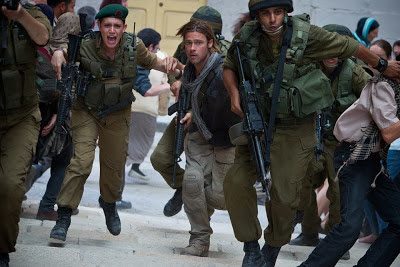 World War Z is one of those no shit, straight to the point movies where we go right down on to business. It doesn’t waste time on unnecessary drama – we are immediately taken to that horrifying zombie action that we wanted to see in the first place. Everything was urgent, fast-paced, and adrenaline was rushing all over the movie that it makes you hold on to your seats and scream at the person sitting next to you. Not that I did that but you get the idea.
What makes World War Z different from all the other zombie flicks we have seen is that the undead here are way more hardcore. These aren’t the usual limping, sluggish zombies that we’re used to. These are sprinting zombies we are talking about, with no regard for things around them as they run in swarms after anything that makes a sound, even mindlessly climbing on top of each other like hysterical ants. Well I won’t wonder since ants have really been the inspiration when special effects supervisor Scott Farrar was designing the zombies with his team. If zombies really turn out to be like this in real life, we’re screwed when Usain Bolt gets bitten.
One thing that I also noticed about the zombies in this film is that they aren’t running after people to eat them. They just tackle, take a bite, then look for another tasty prey. This is genius if you ask me since the movie works around the premise that the outbreak is caused by a virus – and if there’s one thing that a virus does best it’s just to spread and infect. No more unnecessary eating since zombies won’t really need those proteins anyways.
Movies like this enjoy startling the audience with sudden scares that appear out of nowhere. World War Z does this a lot, and effectively as well. You can expect a good number of moments where a zombie suddenly pops out of somewhere to startle like you’re nuts. It was so much fun! We are taken to different scenarios and terrains to give you a complete experience of the zombie apocalypse going on all over the world. From populated cities, to base camps, to an isolated laboratory, the movie keeps you from getting bored of all the running by taking you to different set-ups, each giving you a unique take on the zombie chase. Brad Pitt takes you through all of these so well. His character provides us with the sentimental aspect of the film which we oh so need amidst all the stress from the zombie craze.
I also loved the movie’s unpredictability. Just when you thought it’s going to take you on a certain course, an unexpected turn happens and you’re on a totally different track. The spontaneity made it very engaging and realistic – at some point it even felt like it was a documentary.
World War Z is one of those movies where you’ll have fun while scaring the shit out of yourself at the same time. I’m telling you though, you’d enjoy this more if you watch it with friends, just so you actually know that person sitting beside you just in case you scream at them.

Credits to the images used in this post go to World War Z and/or its Facebook Page. I do not own these images. No copyright infringement intended.