Unlikely Alliance: A “Guardians of the Galaxy” Review 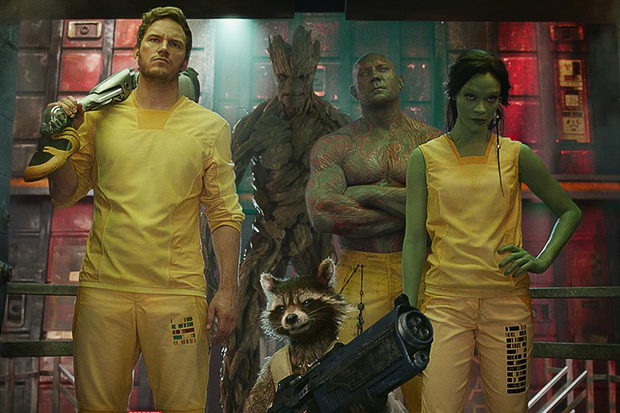 Guardians of the Galaxy may be the most fun Marvel movie I have seen for some time.  Heck I’m guessing I’d still be chuckling if I go and see it again!
A band of misfits from different parts of the galaxy are brought together after Peter Quill, a thief who works with space-pirates called the Ravagers, steals a sphere-artifact and attempts to sell it at Xandar. Apparently, the sphere holds something very powerful, that Ronan the Accuser goes after Quill’s group to get it form him. Knowing that the whole galaxy may be in danger if the sphere goes to the wrong hands, it is now up to Peter, the assassin Gamora, Drax the Destroyer, and the bounty hunters Rocket and Groot, to protect the sphere and stop Ronan from destroying the galaxy.

Guardians of the Galaxy Trailer

Just when I thought I’ve already gotten used to Marvel’s humor in its movies, Guardians of the Galaxy comes along to prove me wrong. And since most of the fun really came from the quirky lead characters, let us take a closer look at them in this review:

Dave Bautista as Drax the Destroyer

If there was someone from the Guardians I was expecting the least from, it’s probably Dave Bautista. Don’t get me wrong, I love the guy, but his performance in The Man with the Iron Fists made me feel embarrassed for him every time he was on the scene. The special effects in that movie made it even worse for his character. 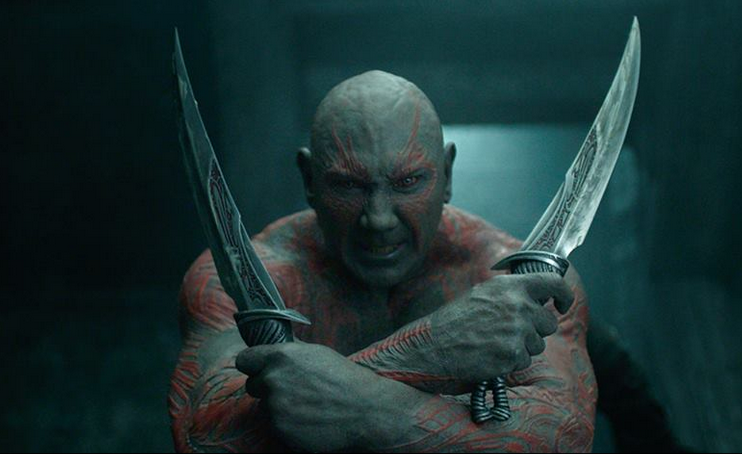 However, his portrayal of Drax the Destroyer was surprisingly notable! Like I said, I wasn’t expecting much from him but he definitely outdid himself in Guardians of the Galaxy. Not only does the character fit him well physically, he also kept it from being one dimensional, and even had some sort of weird, lovable charm. I initially thought that since he’s the “maniac” in the team, he’d just go running around destroying things and choke-slamming enemies along the way. But instead, his character became one of the most-developed in the movie. Heck, most of the funny scenes that I remember are because of him!

Vin Diesel as the voice of Groot

In spite of the fact that he really just looks like a talking, overgrown piece of branch, Groot became the most adorable member the group, not to mention the most useful. Not only is he a killing machine that’s resistant to most blunt, piercing, and even explosive weapons, he’s also got a lot of handy abilities up his sleeve like increased regeneration, growing extra-long limbs, release of glowing seeds (handy in the dark, you know), and creating protective shields with his branches. He even knew how to resuscitate a dying Drax! 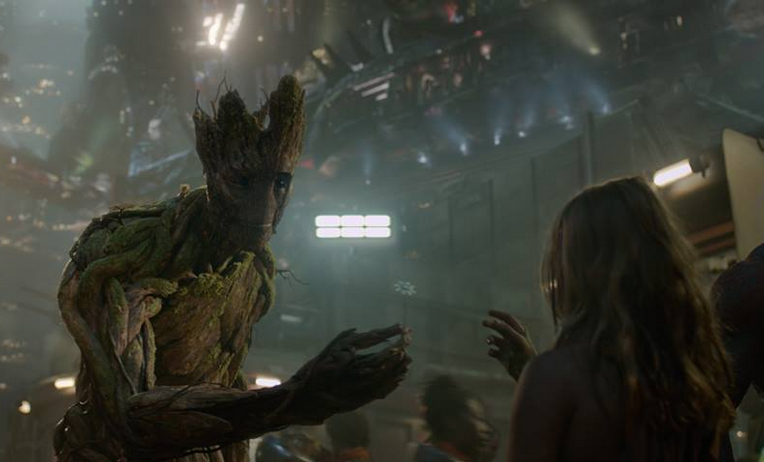 What makes Groot’s character unique is that unlike the rest of the Guardians who all have shady pasts, Groot is an innocent one. I’m not exactly sure how to praise Vin Diesel’s voice acting since Groot barely has any speaking lines and if any, it’s mostly “I am Groot”. But I guess the beauty of his performance is that in spite of being limited to only three words in most parts of the movie (and always in that order), you can still identify the differences in delivery based on what Groot is trying to say. In the end, Vin Diesel did a great job in portraying an innocent humanoid plant who can be a badass branch if he wanted to.

Bradley Cooper as the voice of Rocket the Raccoon

Now that we’ve talked about the brawns, it’s time to tackle the brains! Rocket the Raccoon is probably the smartest in the team, and his skills and knowledge in electronics and weaponry saved the Guardians’ asses on more than one occasion. 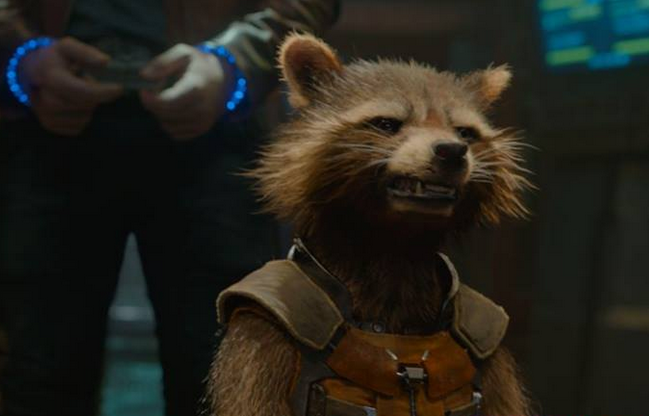 Bradley Cooper did a remarkable job in being the voice and personality of Rocket, although I find it a bit hard to recognize his voice through the character. What I loved about his performance is that in spite of Rocket looking all cute and cuddly, he didn’t end up being a cartoonish character among live action superheroes. I can imagine this to be a challenge given that Rocket is one of the major sources of comic relief in the film, but Bradley Cooper was able to project such a unique personality into Rocket making him the epitome of “small but terrible”.

Gamora is a necessity to the Guardians because she serves as the insider and intel against Ronan and Thanos (not to mention that she tones down the otherwise testosterone-dominant team). 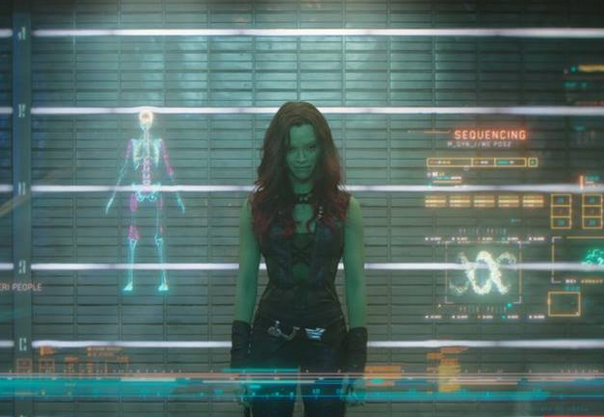 Personally, Zoe Saldana is probably the least that I am familiar with among the lead cast, and quite frankly her character also has the tendency of being the least favorite. However, she was in no way upstaged anywhere in the film, banking on the fact that she’s the only female member of the group. You can see the depth of Gamora’s character, from her hate for Thanos to her “curiosity” for Peter Quill.

The acting head of the Guardians of the Galaxy, Peter Quill is the group’s democracy personified. In spite of being a rogue and a jerk, Peter is also charming and eloquent. This, added to the fact that he’s an outcast like the rest of them, made him a quite persuasive leader to the team. 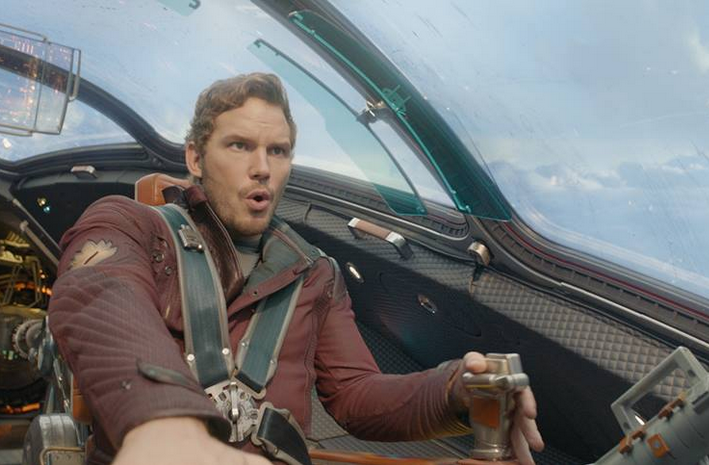 Chris Pratt is sooo perfect for Peter Quill that it’s hard to imagine the role being portrayed by someone else. The character was funny, a rascal, and yes, hot at the same time. Chris is so into the character that all he really had to do was be himself and you can actually tell that he was just having fun in order to portray Quill. He was able to develop the character from being a selfish, introverted jerk to a charismatic leader.
I can already see a lot of potential in Guardians of the Galaxy as a franchise, given the fact that the film showcases a diverse universe that’s reminiscent of Star Wars. It was so much fun, being made up of the right mix of humor, action, and geekiness! 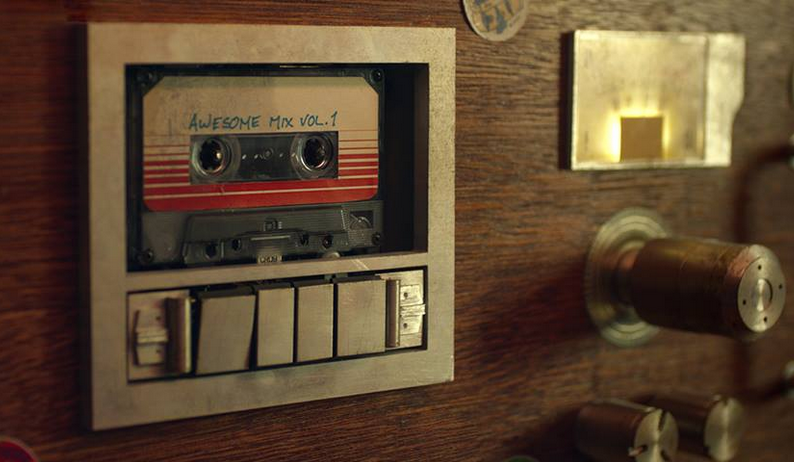 A sequel to Guardians of the Galaxy has already been announced and set to be released on July 2017.

Credits to the images and videos used in this post go to “Guardians of the Galaxy”, and/or to their respective owners. I do not own these materials. No copyright infringement intended.