After a rough VHS-quality introduction of the political situation, the viewer is brought in an idyllic decrepit little house, where a young poor couple (LJ Reyes, Anthony Falcon) is visited by a seemingly friendly soldier (Luis Alandy). Starting off with card games and endless dick jokes, the fun swiftly fades as increasing intimidation leads the three to a deadly face off, pressuring them to big revelations that end up putting their lives pushed over the plank.

The unsubtle grimness brims from start to finish in Jun Lana’s dark political chamber melodrama ANINO SA LIKOD NG BUWAN (2015). As the writer-director claims, ANINO was based on a ‘90s play about the untold stories of “No Man’s Land” in Marag Valley, Apayao. Set in one plodding night of passion and betrayal, the most talked-about feat of the film is its one-take cinematography, the key element in the film’s intentional “stagey” theatricality that works and fails in equal measure. But then again, this voyeuristic camerawork is called for: what other approach would make or break the stripped down (oftentimes literally stripped) trio of great performances?
Besides the fact that Luis Alandy and Anthony Falcon’s relentless sex appeal almost transformed the film into an ST movie, they’re effective binary supporting players to their feisty anti-heroine. The show is owned by none other than Ms. Reyes, whose range in many different modes clearly blew her cutesy Starstruck days out the window. Given only a few breathing time in her chameleon-like character, she slips through every mask with aplomb. For instance, her laughably ridiculous romantic is quickly shattered in the moment of truth where she aligns herself with the deathly climax and denouement. Her performance was welcomed with divisive reactions, but whether ANINO is executed as a film or a play, LJ’s disappearance into the role is indeed impressive and in many ways refreshing. 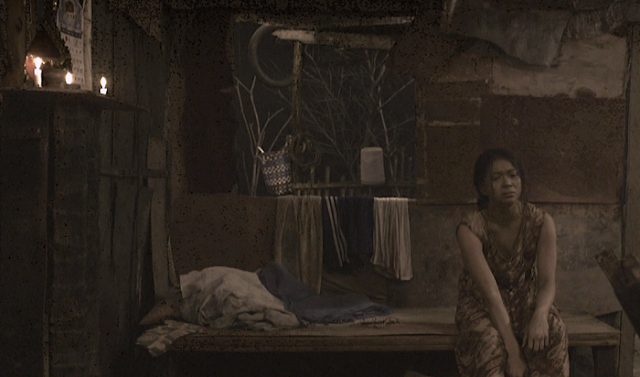 Thematically, ANINO follows BARBERS TALES as a next step deeper into the rural situation of militarization. Departing from the brilliant lambasting of the Martial Law’s extrajudicial killings, Lana’s ANINO hammers closer to home – the equally violent 90s where a so-called newfound “democracy” operated. A strong, empowered and bewildered female protagonist reveals feminist politics clearly on point, but the class conditions scream all over the frame. Lana’s recent political (indie) dramas aim to shed light on these overshadowed narratives to reveal to metropolitan audiences a raw interpretation of rural desperation at its last breath, following the massacre of both land and man. And the usual scenario within activist cinema, of proletarian struggle vs. the dominant armed force, is shifted by Lana to a claustrophobic (albeit a very melodramatic) confrontation that gives way for the viewers to weigh in on their biases. 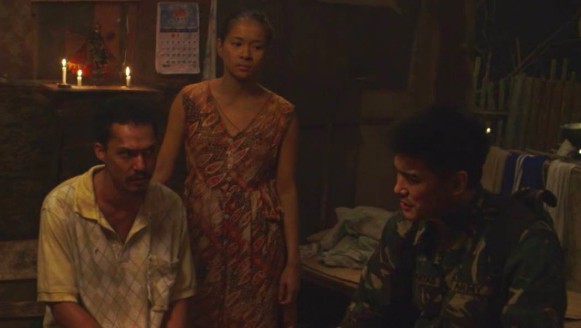 Beyond the political agenda, Lana delves deeper into his characters to suggest these intentions are angst deeply rooted in different human conditions that also tend to compete against each other. But whoever wins in this arms race, whether reel or real, I believe it is no coincidence that its UP screening early 2016 occurred after the onslaught of IP killings in Bukidnon, and is now pegged for a one-night only screening in the metro after the new administration’s inauguration. There is still a troubling situation indeed, and ANINO perfectly begs the question in the current ceasefire of both militant and military forces.

Interestingly, its UP Diliman screening coincided with the UP students’ vigil for a slain lumad child. The scenes of intense conflict in the rurals are present in both fact and fiction and they are now much more visible, transcending generations and landscapes of militarized areas (no mans’ land) into endless narratives of the “bakwits” both from the North and the South of the archipelago, now to be revealed right before the eyes of a bewildered urban audience. It should rather be considered a microcosmic ideological battle only wrapped with sexualised, even voyeuristic aesthetics – the so-called shadow behind the shining moonlight. And like its trio of anti-heroes, ANINO SA LIKOD NG BUWAN demands an answer from its viewers as they sit back in the dark, in the middle of a waging civil war: “Sino ang nasa tamang panig ngayon?”