The Weapons of Star Wars

With Star Wars: Episode VII – The Force Awakens just looming around the corner, it takes some significant effort to keep my excitement from spilling all over my social media accounts. It would seem though that I really couldn’t help it because here I am, making another blog post about this galactic war. 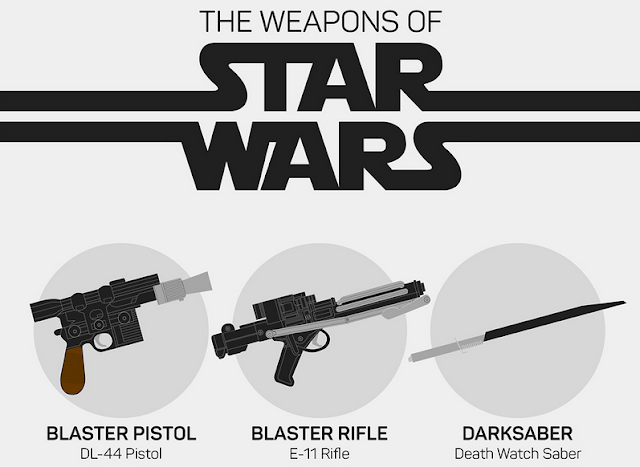 I guess my fandom comes from the fact that George Lucas created an entirely different world – or galaxy for that matter. But other than the setting, plot, and characters, we also got to enjoy the out of this world machinery that we were introduced to – high technology space ships, drones, robots, wild animals, evil villains, and even weaponry.
In that galaxy far, far away, there were some pretty neat weapons made up of rifles, guns, and even sabers. Whoever thought of the idea to bring the old saber into the picture as a light saber, that was a stroke of genius.
Let’s look at some of the weapons used in Star Wars:

Admittedly, my fandom is not hardcore enough for me to know all these weapons by heart. Let’s go through all of them, shall we?
Blaster Pistol (DL-44): This pistol, in a modified version, was the weapon of choice for Han Solo. You’d always see it on his side and he used it to kill Greedo in the Star Cantina.
Blaster Rifle (E-11): The E-11 rifle was the rifle of choice used by the Imperial Stormtroopers. It was their standard issued weapon. In the Battle of Endor rebel troops also used these rifles.
Dark Saber or the Death Watch Saber: This saber was an old saber created by the Jedi “in the age of the Old Republic”. It has become an heirloom passed down amongst the Vizsla’s. The light sabers are the iconic weapons used throughout the Star Wars films.
Light Saber (Ezra’s Light Saber): This particular light saber was the weapon for Ezra Bridger a Padawan rebel. The saber had two modes, one as an adjustable blade light saber, and also as a blaster mode so that it could stun enemies.
Lightsaber Pike (Temple Guards Saber): An interesting addition to the light saber range as this one has dual sabers, one at each end. This saber was used by the Jedi Temple Guards.
Energy Shield (Gungan Energy Shield): With all the laser shots being fired and light sabers being swung about, besides ducking and hiding, you need a way to defend yourself, and this shield is just the thing to do that. The shield uses Gungan plasma technology to create an energy barrier to shield the holder against attack.
Sith Lightsaber: These sabers yielded a crimson blade and were used by the Sith, although not entirely by the Sith. They were the weapon of choice by the Sith Lords. These sabers used synthetic crystals, while the Jedi light sabers used natural crystals.
Honor Guard Rifle (AB-75 BO-Rifle): This rifle was used by the Lasan Honor Guard. It had a blaster, bayonet and an electromagnetic pulse generator. It was said that the weapon was difficult to use due to its size and layout.
Smoke Bomb: Where would you be in battle without a few smoke bombs to aid in your getaway. These smoke bombs were used to create diversions.
Flame Rifle (Model CR-24): This rifle was an incendiary device to shoot flames and fire. The rifle has a range of 10 meters, which is fairly short when you think about some of the other blasters and rifles. However, if you want to toast your enemies, this is the rifle to do it.
Kun Lightsaber: This was the lightsaber of Jedi Knight Exar Kun who went on to become a Sith Lord. It is a dual bladed saber and gave off a blue light when deployed.
Inquisitor’s Lightsaber: The Inquistor’s lightsaber was also a dual bladed saber used by the Rebels. It was specifically used by the Jedi hunter known as the Inquisitor. Not a very friendly looking fellow.
Quad Cannon (AG-2G): Now were getting into some serious fire power. This laser cannon was used on the Millenium Falcon and had a firing rate of every 1.32 seconds. With two barrels firing alternatively on top and bottom, this weapon could do some major damage.
Booma: This is another weapon used by the Gungan, and is like a hand grenade. These energy balls were lobbed by small catapults towards the enemy. While good against individuals and some vehicles, they were not powerful enough to use on buildings.
Missile Launcher ( PLX-2M): The PLX is a portable missile launcher that can be used by an individual. It has a range of 50 kilometers and is not meant to be used in close quarter fighting due to its fire power.
Now I know what you’re thinking – where’s Kylo Ren’s much-talked about crossguard lightsaber? Personally I think that there may be some ergonomic issues with a hilted lightsaber – you know, with the movie’s history of hands and arms getting cut off. But with how well it does in the battlefield, I guess we may have to wait for the movie to see it in action.
This infographic was brought to you from bad credit loans company buddy loans.