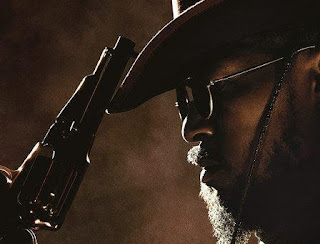 I have once been deceived into watching The Man with the Iron Fists (Check out my review of it here), just because Quentin Tarantino’s name is on the promotional poster. I am a huge fan of the director that I blindly bit into the deception of the said Kung-Fu inspired film. It turned out however, that Tarantino’s name was only there as a “presented by” credit, and that the real director was RZA. This is why I had to check, double check, and recheck before I bought my ticket to Django Unchained and man the movie sure did not disappoint.
Django Unchained is about a slave named Django (as DJango has said in the movie, “the D is silent”) played by Jamie Foxx, who gained his freedom when he helped out a Bounty Hunter named King Schultz (Christoph Waltz) find the wanted criminals called the Brittle Brothers (Ellis Brittle, Big John Brittle, Raj Brittle), to kill them and get the bounty on their heads. Seeing the potential in Django, Schultz offered to help him find his wife Broomhilda Von Shaft (Kerry Washington) and in return, Django has to assist Schultz in bounty hunting through the winter. As spring arrives, the duo has to come up with a plan to rescue Broomhilda, who apparently has already been sold to Calvin Candie (Leonardo Dicaprio), the charming but brutal owner of the Candieland plantation. 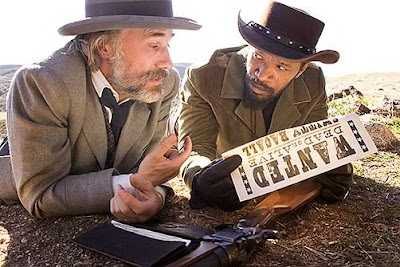 Django’s first bounty: a member of the Smitty Bacall Gang

“Wanted, dead or alive. Smitty Bacall and the Smitty Bacall Gang. For murder and stage coach robbery. Seven thousand dollars for Smitty Bacall. One thousand and five hundred dollars for each of his gang members. Known members of the Smitty Bacall Gang are as follows, Dandy Michaels, Gerald Nash, and Crazy Craig Koons.”
The film has Quentin Tarantino written all over it! A few minutes into the movie and we already see blood and flesh flying everywhere, which also explains its R-16 rating. Seriously, there’s lots of whipping, shooting (this movie has the best gunfight I have ever seen), and a man even gets torn to shreds by dogs in here, this is definitely not the movie you would like to watch on your family day. But in spite of all the violence, everything was artistically shot and the scenes have a theatrical taste to it that everything turned out to be so much fun! Don’t get me wrong, I’m not the sadistic type who enjoys gore-porn movies like the Saw series or Final Destination, but Django Unchained is at a totally different level in that the violence feels creative instead of cringe-worthy. 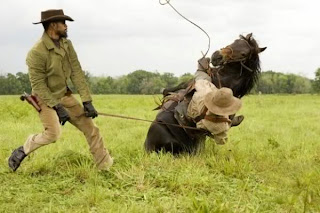 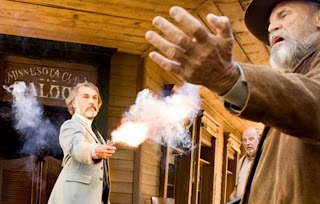 In case you’re wondering, that ingenious weapon Dr. Schultz is using is called a “Derringer Gun”.
It was a very well-written script, and a huge part of the enjoyment factor comes from the humor embedded into the otherwise glum and gory plot. If it wasn’t for the witty lines, the funny script, and the equally clever actors who delivered them, the movie would have been nothing but a morose love story with lots of murder. This is one violent movie that would actually make you laugh, smirk, and grin at the cleverness of it all.
All of the characters are well-developed, even the minor ones seem to have a good background story with them, in addition to the fact that the actors who played these minor roles are big names themselves. The leads have also done an amazing job that each of their characters could have easily had movies on their own. At first I was in doubt whether Jamie Foxx was the best option to be the lead, but after seeing the movie I couldn’t imagine anyone else who could’ve done it better. His transformation from a meek slave to an unlikely, ruthless prince charming was very natural that you hardly notice it happen. Christoph Waltz on the other hand, was both loveable and merciless as Dr. King Schultz. His eloquence and fluency gives you the impression that he’s always in charge and that nothing can go wrong with this man. A skilled bounty hunter is one thing, but a persuasive, skilled bounty hunter is a totally different story.
See also
geoffreview·
Movies
·April 12, 2014 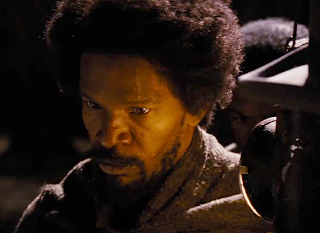 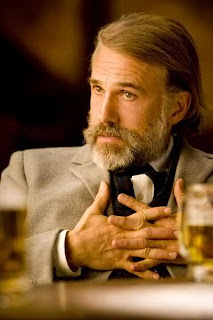 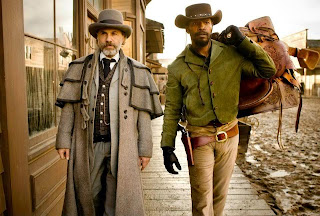 Leonardo Dicaprio is undoubtedly the most exceptional actor in the film. He was able to portray Calvin Candie as intimidating, eloquent, cruel, and charming all at the same time. You’ll never know if he’ll snap up anytime and go on a killing spree. Dicaprio was able to make Calvin Candie’s presence so powerful that Kevin Schultz expressive character feels so small when he’s around.

“Gentlemen, you had my curiosity, now you have my attention” 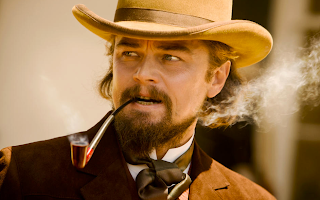 Django Unchained is a whole package of fun and entertainment. It was stylistic, playful, and daring enough to tackle the very sensitive and historical subject of racism and slavery. This movie may not be for everyone, but I would strongly recommend it to anybody who wants a refresher from all the fairy tale movies we’ve been having lately. If I had to describe it with one word, I’d say it’s badass.
Credits to all the images in this post go to the Django Unchained Facebook page. I do not own these images. No copyright infringement intended.