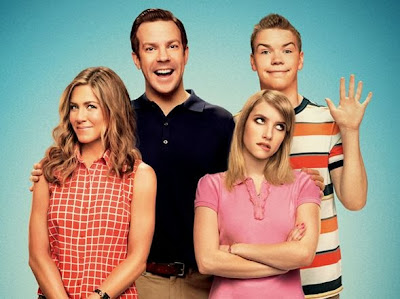 I still can’t get myself to decide whether this movie’s a family flick, or not. Sure, this movie’s got the good stuff like building relationships with your folks and getting over family issues but what the heck, I won’t watch this movie with my mom around.

David Clark (Jason Sudeikis) is a small-time drug dealer who ends up having to smuggle two metric tons of marijuana across the Mexican border to settle a debt with his drug lord-buddy. Knowing that doing the job and crossing the border alone would be huge red flag for drug smuggling to the border inspectors, David comes up with the idea to disguise the smuggling as a family trip to Mexico. He hires his neighbour-stripper Rose (Jennifer Aniston) to act as the mom, and his 18-year old virgin neighbour Kenny (Will Poulter) together with a runaway teenage girl named Casey (Emma Roberts) to act as their kids – all posing as a fake family called the Millers.

This movie’s basically about a bunch of misfits who get together to accomplish their own personal agenda (which were all really just about money), and then these misfits getting along with each other along the way. The premise isn’t really that unique, but it could be interesting enough if you just think of what they would probably have to go through just to keep their disguise and avoid getting caught. And this really where all the fun of the movie comes from – the hilarious antics that these characters had to do just to keep their cover, with the fear of getting caught adding thrill to the plot.
I won’t go so far though as to call this the best comedy movie of the month, I mean This is the End still did a little bit better in my charts, but I had to say that this film also had its good moments. I did have a good laugh here and there and I meant a real laugh, not just the usual grunts that I do when watching comedy. The script was witty, which was delivered well by the cast.
Speaking of the cast, all four of the leads had good chemistry that they were very effective as a riotous phony family. Individually though, they weren’t as much fun. It’s easy to tell that Jason Sudeikis was just trying too hard and Emma Roberts was just plain bland. Will Poulter however, was perfect for the part and Jennifer Aniston owned the whole stripper thing.
See also

Formulas and Firearms: A “The Accountant” Review

In spite of this movie being about a fake family that ended up being a real one (oops, sorry for the spoiler right there. But I’m sure you already knew that was what’s going to happen), I don’t recommend having this movie for your Sunday night family film-viewing. There’re enough sexual references in this movie to make you go to bed early, so watching this with your folks might not be a good idea…unless of course your parents are as cool as the Millers.