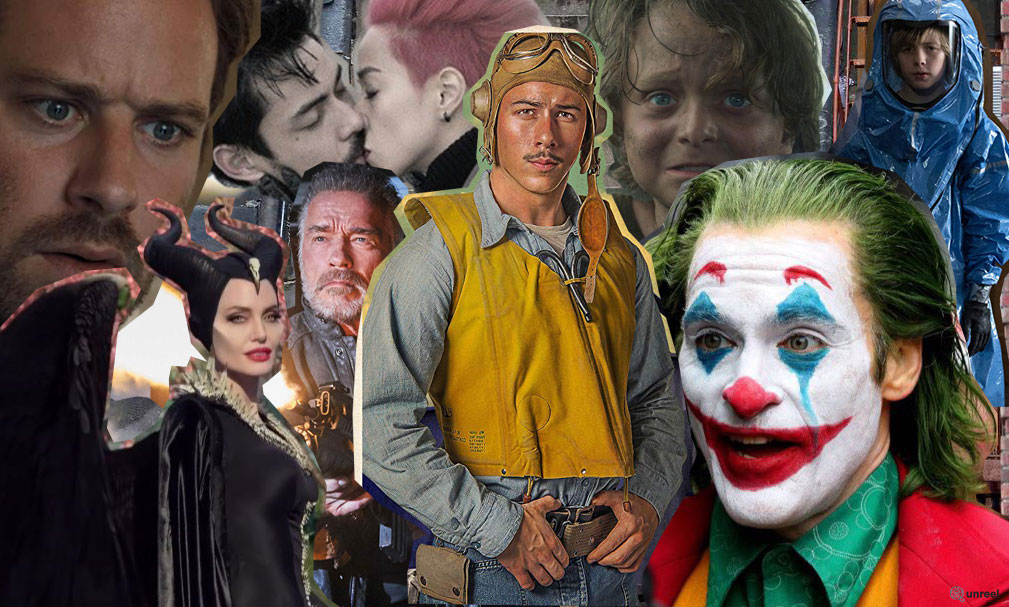 Welcome to the Geoffreview Monthly Movie Log! It’s our one-page report where you’ll see the short-takes, reviews, and reactions of the Unreel Team to the films we have covered within one month.

So many movies, so little time! Our first ever monthly movie log will feature the films we have seen, both old and newly released, within the month of October. Our lineup this month includes Todd Phillip’s record-breaking “Joker”, Joachim Rønning’s reimagining of Maleficent, Tim Miller’s take on the “Terminator” franchise, and more!

The last film I know that polarized social media in the same way that “Joker” did, is Darren Aronofsky’s “Mother!”. This is the kind of film that you would either love so much, or hate to the core. I left the cinema disturbed, which in most cases would be a good thing, because it means that the film has affected me so much, that it warrants a “debriefing” long after I have left the theater. In the case of “Joker” though, I left with a feeling of unease. Sure, it’s created with masterful craftsmanship, the performance is remarkable, and the storytelling is enthralling, but I don’t know why I felt terrified. Phoenix is phenomenal but the dark, graphic  violence, and relatively dangerous depiction of mental health is worrisome.

Maybe the terror I felt is because of the fact that the film effectively drew from our real-life woes and projected them on screen. We don’t just see a comic book character but rather, we actually see ourselves in Arthur Fleck. You identify that you’re that same guy that that gets f*cked by society every day. – Geoff

With “Terminator: Dark Fate”, director Tim Miller makes an admirable if frustrating follow-up to the series’ once intriguing world overrun with sentient AIs and OP droids, one that sadly feels unconcerned and ultimately depleted. It doesn’t help to be aware of the film’s backstage kerfuffles, from ambush screenings to a whole year of delays from its original 2018 playdate. Whatever went down behind the scenes, the film seems to keep a self-approving “look at me I’m all kept up with the times” kind of schtick, one that almost sends it over the edge of exploitation. You see, it likes to remind us that at its center are three absolutely strong female characters, but beyond that, there’s little (if at all) that the film actually wants to say. – Armand

If Michael Bay’s “Pearl Harbor” spent two-thirds of its three-hour runtime devoid of its tepid love-triangle subplot and exclusively devoted to a blockbuster depiction of the war in the Pacific, then we would get “Midway”.

Robert Stromberg’s “Maleficent: Mistress of Evil” may be a reimagining of the classic “Sleeping Beauty” story we know, but it does have all the makings of a quintessential fairy tale – a predictable storyline, a happy ending, and a significantly high body count.

Disney is flexing its VFX capabilities with the incredible work that they have done with the character designs and world-building. The gorgeous cinematography only highlighted Angeline Jolie’s bewitching presence, which is really the best reason to see this film.

But what Disney put in building a realistic 3D world, it lacked in creating a fully cohesive storyline. One minute the faes and the humans are at war and then just a few moments later, they’re literally gathered for a wedding, completely ignoring the fact that friends and families have been slaughtered just a short while ago. But hey this is a fairy tale after all, so “happily-ever-afters” are the priority. – Geoff

In The Tall Grass

Vincenzo Natali reimagines Stephen King and Joe Hill’s novella, In The Tall Grass, with brimming visual flair and boundless creative vigor. The searing horror-thriller builds a telluric purgatory in the eponymous labyrinth of green, with characters so enticing to watch, most chiefly Patrick Wilson’s Ross Humboldt. However, it’s the addition of Harrison Gilberston’s character that gives spine to Natali’s adaptation, giving it a heart center to its viridiscent nightmare. Working with DP Craig Wrobleski, Natali crafts some of the headiest, most interesting visuals I’ve seen in horror films of late. – Armand

The “big twist” labored in Ciarán Foy’s Eli doesn’t match the base tension and mystery that sizzle nicely before it. Slightly ponderous and often unwieldy, the screenplay doesn’t do much to help sell its own idea. Movies about murderous prodigies are difficult to get right, even with competent hands (remember David Yarovesky’s Brightburn?). But what ultimately transpires in Eli is hard to recommend in spite of this—a mind-numbingly trite horror-mystery with so little of both. – Armand

There are interesting bits in Babar Anzari’s Wounds, chiefly Armie Hammer. His casting is a choice, especially in a horror movie that casts a haunted smartphone alongside him. It turns out, the phone is plain MacGyver. Hammer, who plays a laidback bartender in the film, is here to help examine the hollowness of man. This, the movie tells us with a Joseph Campbell quote and the subsequent plunge Hammer’s character, Will, does in the name of his fissured masculinity and unchecked privilege. The film, however, does not really go beyond its prospects. Criminally, it underuses its female characters (Dakota Johnson and Zazie Beetz) and does not take its technophobic and existential horrors into something more. – Armand

Set in the cusp of Eurasia, Sigrid Andrea Bernardo’s “UnTrue” tells the warring sides of Mara (Christine Reyes) and Joachim (Xian Lim), a young married couple living in the somber, enigmatic city of Sighnaghi in Georgia. Both say—unironically and without sarcasm—that they have wedded lunatics. And so begins a twisty “he-said, she-said” thriller that morphs from the sorry union (and eventual collision) of two unhinged minds into the dark recesses abuse can take you. The gloomy Georgian backdrop, with seemingly omniscient Tbilisi singers to match, help the film transcend its b-movie premise and the unsubtlety it comes with. – Armand