Now Hiring: An “On the Job” Review 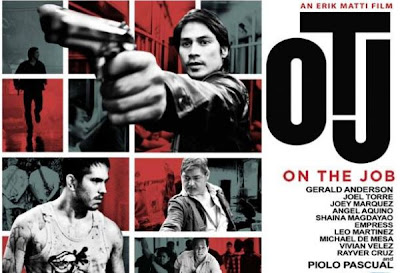 I felt very happy for Philippine cinema after seeing this movie – particularly for the Action genre of Filipino films. The action movies that we had in the 80s and 90s were in no doubt timeless classics however, even as a kid I already noticed that many of our action films follow the same basic pattern or at least, always recycles certain themes – the main character who’s always a man of few words, the leading lady who always gets kidnapped, the final gunfight inside an abandoned warehouse which always culminates with the arrival of the police (who always gets to the scene when all the fighting is over), among others. On the Job (aka OTJ) breaks this pattern and stood on its own. It resurrects Filipino action and adapts it to the taste and trend of the current generation.
Based on true events, On the Job follows the story of four men who live dangerously along the lines of crime and law. A hired killer, his apprentice, and the two police officers who are after them – the lives of these four individuals collide as they get caught up in the business of corrupt government officials.

On the Job Trailer

One of the best things that I loved about OTJ is that it invests on emotion and character development as much as it does on the action sequences. We don’t just get cardboard cut-outs of characters, stereotyped as outlaws and law enforcers. We go deeper into the lives of these characters, getting to know the motivation behind their actions. Tatang’s (Joel Torre) and Daniel’s (Gerald Anderson) characters for example, weren’t just plain bad guys – we also got to see them as a father and a son. We also don’t just see Sgt. Acosta (Joey Marquez) and Francis (Piolo Pascual) as plain police officers – we are allowed a peek into their family issues. The film takes us into the lives and struggles of these characters in detail, making the audience empathize for all of them, thus making it harder to take sides. I guess, much more than the action, what really makes OTJ very engaging is its emphasis on the characters’ relationships with each other.
I have to say though, the action sequences were also gripping! In fact, my favourite scenes from the movie were the chase scenes of our four leads. There wasn’t really anything new in these action sequences, but the execution and direction made it feel fresh and exciting! The notable performances of the lead actors are also worth mentioning, especially Joey Marquez and Joel Torre. They are proof that given the right direction, the Filipino talent really has a lot to show, much more than the stylized drama that we see in Telenovelas these days.
On the Job would be one good example why I enjoy B-Rated Filipino movies more than the mainstream ones. It was unpredictable, intense, and emotional at the same time.
OTJ is reported to have a US adaptation which will be directed by Baltasar Kormákur (Contraband and 2 Guns). It’s also said that Erik Matti is planning a sequel for the said film.

On the Job Cast

Piolo Pascual as Atty. Francis Coronel, Jr.
Gerald Anderson as Daniel Benitez
Joel Torre as Mario “Tatang” Maghari
Joey Marquez as Sgt. Joaquin Acosta
Michael de Mesa as Cong. Manrique
Leo Martinez as Gen. Pacheco
Angel Aquino as Lolet
Vivian Velez as Thelma
Shaina Magdayao as Nicky Coronel
William Martinez as Rex
Rayver Cruz as Bernabe
Empress Schuck as Tina
Directed by Erik Matti
Credits to the images and videos used in this post go to “On the Job” and/or to their respective owners. I do not own these materials. No copyright infringement intended.