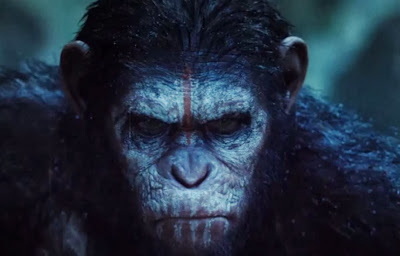 If you didn’t get enough of the ape-swinging action that we had in the 2011 film, Rise of the Planet of the Apes, hang on a little bit longer for its more badass sequel featuring a more badass Caesar.
A decade after a virus was unleashed that caused the accelerated evolution of apes, a war is threatening to break out between them and the humans.Check out the new teaser trailer below:
Don’t you just love war movies? However, I’m a bit torn with this one as I’m not quite sure if I’ll take the side of my own species, or I’ll give in to the empathy that I feel for these intelligent monkeys…I mean APES! If you got an eagle eye, you may have noticed the ship “Icarus” in the 2011 movie, hinting a possible sequel. Icarus is the name of the ship in the 1968 version of the Planet of the Apes.
The humans are apparently led by Gary Oldman while the apes still have Caesar as their leader. James Franco’s character Dr. William “Will” Rodman, is nowhere to be seen in the film, and is most likely not going to be a part of it.
Dawn of the Planet of the Apes will be released on July 2014, directed by Matt Reeves.