My Pursuit of “Happyness”

“Knock knock”
“Who’s there?”
“Nobody”
“Nobody who?”
…
“Nobody who???”
…
My boss has been encouraging us for some time now to go and see “The Pursuit of Happyness” because “It’s sooo sales” (Gosh I can hear her voice when I typed that). 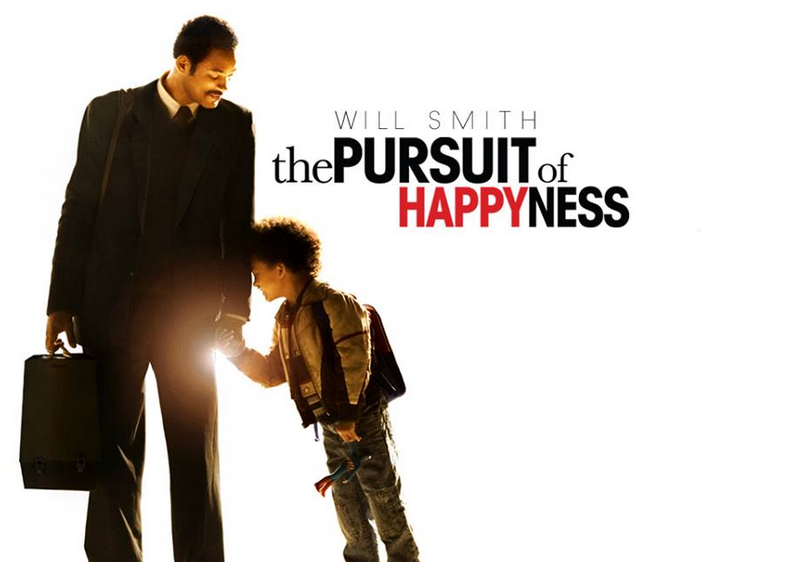 I was finally able to grab a copy some weeks ago, but it has been left untouched and sitting with the other movies I’ve got at home. If you know me well, in spite of being a movie reviewer, I’ve always been trying to avoid tearjerker movies. I sometimes get too engrossed in these kinds of films that I often end up feeling depressed afterwards instead of feeling good. Movies are a way for me to temporarily get away from reality, so I don’t wanna end up escaping to something that would make me feel morose.
This is the reason why I was apprehensive about watching The Pursuit of Happyness. A lot of my friends have been saying that it’s a weepie, and I don’t think I’d be in a mood to watch something that would make me feel miserable. Thing is, when it’s a long weekend and you’re stuck at home, you also get tired of lying in bed and contemplating your life. I glanced upon the Pursuit of Happyness, and it seemed to be calling out to me, muttering “Kill me, please” because it hasn’t been serving its purpose (to make me cry). I gave it a chance.
I’ve just finished watching it and yes, it is a tearjerker but instead of feeling gloomy, I’m actually inspired. Heck, it even inspired me to write a long blog post.
My boss was right. It is indeed “sooo sales”, and pretty relatable actually, given that I’m a salesperson myself. Will Smith’s character, Chris Gardner, sells Portable Bone Scanners (I didn’t know there were such things) for a living. Problem is, nobody is interested in them, and hospitals think they were unnecessary and expensive. If you were in sales, you can pretty much work around your product being expensive, but when it becomes “unnecessary”, you’re f*cked up, and this is basically what happens to Chris’ life.
Seeing this movie has made me reflect on myself – as a salesperson, and as a yuppie in his mid-20s struggling with the pressure of having to be “somewhere” or being “somebody” by now.
For a few months already I have been contemplating my current circumstances in terms of career, relationships, and yes – happiness. Being a salesperson has trained me to measure my life with numbers – how many sales I’ve closed, how much money I have in the bank, how many months my last relationship was…and honestly, I’m not very satisfied with the figures. Don’t get me wrong though, I think I’m doing pretty well in sales as I’ve been regularly hitting my targets (more or less), but in spite of the momentary “high” that I get whenever I’m meeting my quota, I’m just not quite sure if these have been translating into the kind of fulfillment that I’m looking for.
Over the years my lifestyle has upgraded since I’ve started earning my own money, but this progression has also increased my cost of living. Every move that I make now costs something – when I sleep (rent), talk to my friends (phone bills), visit my siblings (getting on a cab), and even eat or drink (my food used to be free). I chose this because I want to train myself for independence, but this comes with the fact that being a salesperson was supposed to be more financially rewarding. I ask myself, am I happy?
Chris felt the same lack of fulfillment in the movie. He’s good with people and he’s great with numbers, but no matter how eloquent he is in his sales pitch and how many leads he visit, things just don’t seem to go too well for him and his family. My difference from him would probably be the fact that I actually get to sell something but this guy, those bone scanners aren’t doing him any good.
Chris’ life has been going on a downward spiral, and it’s even harder because it’s not just his life that he needs to worry about. He ends up sleeping in a restroom, running away from a cab driver, getting arrested for unpaid parking tickets, and in all this he has his 5 year old son (played by Jaden Smith) to look after. He becomes so desperate that he even gets on an argument over 14 dollars.
But then again, Chris is a salesperson. And being a salesperson means you’re persistent, and dedicated. His bone scanners were “expensive and unnecessary” but he keeps on selling them anyway. He gets on an internship which probably had more qualified applicants, but he still goes for it. A salesperson also finds ways, and this is what he does. He finds a way around looking like a homeless man on his interview, he finds a way around having nowhere to spend the night, he even finds a way to finally sell all of those cursed bone scanners. During the time when he can’t sell anything, he became a real salesperson.
It was this time during the movie that I realized that I‘m actually better off than a lot of people. I have a steady job, I can eat good food, I can have a warm shower (we don’t have a heater but if you’re in the Philippines, the climate is enough to heat the pipes and warm the water), I even go to the movies all the time! I’m not saying that I should just be satisfied with where I am right now, but if I had the same dedication, persistence, and resourcefulness that Chris had, I may actually find that fulfillment I’m looking for.
You may have guessed by now that the movie has a happy ending. If my life was a movie, I’m probably still in the part where I’m still working towards being happy. The take-away that I got from this movie, is that happiness isn’t something that you just wait for. It’s something that has to be pursued.

Credits to the images,videos, and materials in this post belong to “The Pursuit of Happyness” and/or to their respective owners. I do not own these materials. No copyright infringement intended.
by Geoffrey Ledesma