Total
0
Shares
0
0
0
“Meh”. That was what I thought to myself after leaving the cinema.
A few months ago, Jupiter Ascending looked promising judging by its trailers, although I instinctively managed my expectations knowing that this is going to be one of those “You are the chosen one and the fate of all depends on you” kind of movie. But hey, I’m a sucker for sci-fi so it wasn’t really a question whether I should see it or not. It was a good thing though that I already lowered down my standards because man this movie is one huge snooze fest! I am sooo tired of all these Messianic plots.
This is another hero-centric movie, taking a few pages from Hunger Games, Divergent, and even a little bit of Star Wars without getting anywhere close to being as good as any of those. The acting performance was flat, the script bland, the attempts at romance were futile; and the film tries desperately to make up for these shortcomings by bombarding us with high-tech spectacle in the form of out of this world whatsits and fancy flying boots.
To be fair, the CGI really was impressive, and my eyes were glued to the screen during that gripping spaceship-chase. The boots were overused a bit but it was nice seeing Channing Tatum gliding in thin air so I didn’t mind.

A Messianic Complex VS. The Mass Movement Version of History

The film was, and I quote my movie buddy, “A distortion of history or way of seeing the world. Instead of people shaping society, (the movie) puts too much emphasis on an individual”. Our lead character was developed to have a Messianic Complex, making her some sort of savior who has the fate of the whole world resting on her shoulders. I understand why this has a certain appeal to the audience – it brings life to their fantasy that in spite of the monotonous, dull pace of their life, there could be something special and extraordinary about their existence. A lot of us think that we should be somewhere else instead of our gloomy cubicles, believing that we are destined for a bigger and grander purpose.
In Jupiter Ascending, the whole world is in the hands of ­­­Jupiter Jones (Mila Kunis). Human Beings were no longer the ones who shaped their society and their world, and the Mass Movement version of their history is ignored. Instead, it was revealed that their whole existence relies on a single individual, and they are suddenly pictured to be very small and their history irrelevant. 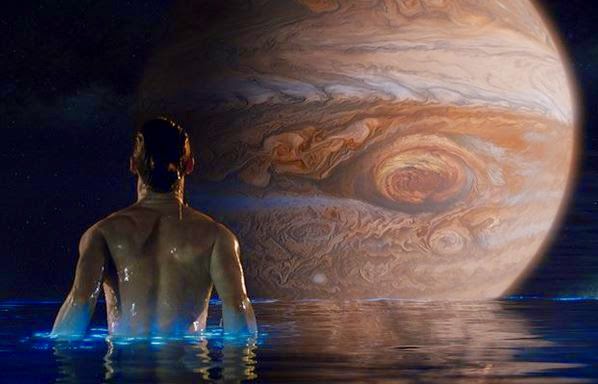 This messianic characterization is no longer new to us, nor is a plot that shows planet Earth as a tiny dot against a huge “galactic empire”. I guess what supposedly makes Jupiter Ascending different is that it presents our planet and humans as a commodity – articles of trade which are farmed and harvested for the consumption of who knows what kind of alien species out there. Surprisingly, the conflict revolved around capitalism and profit, making the existence of the human race even tinier in what apparently is a bigger enterprise. Unfortunately, the film wasn’t able to fully exploit this uniqueness, and the largeness of the setting becomes lost in the tasteless acting performance and dreadful love chemistry.
Don’t be fooled by the sci-fi spectacle or those sneak peeks of a topless Channing Tatum. Jupiter Ascending isn’t worth seeing in the cinema, just wait for it to come out on DVD or better yet, on HBO since it’s not really worth the effort.

Credits to the images, videos, and materials  used in this post go to “Jupiter Acending” and/or to their respective owners. .I do not own these materials. No copyright infringement intended.