Magic and Monkeys: An “Oz the Great and Powerful” Review 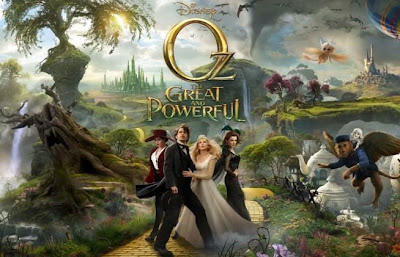 I remember watching The Wizard of Oz when I was a kid, and being fascinated by the whole story especially by the quirky main characters. It was very funny to think of the idea of a Tin Manwanting a heart, a Scarecrow needing some brains (he may be happy that he doesn’t have one when we have the zombie apocalypse), and a Cowardly Lion wishing to be courageous.
When I heard about Oz the Great and Powerful, I thought this was going to be a remake of the 1939 film that we knew, and this got me a bit worried as I remembered the disaster that was the remake of Charlie and the Chocolate Factory. When I learned though that this was going to be a prequel, it sounded like a great idea all of a sudden.
To avoid confusion in this review, let us call our “wizard” by his real name which is Oscar, and we will refer to the magical land of Oz as, well…”Oz”. And oh, just in case you wanted to know, according to the movie the Wizard of Oz’ full name is the mouthful  “Oscar Zoroaster Phadrig Isaac Norman Henkel Emmannuel Ambroise Diggs”. Having the initials “O.Z.P.I.N.H.E.AD.”, you would know why he shortened it to just “Oz” instead.
I was freaking out deep inside when the movie started and I kept bugging my movie buddy asking him, “Why is the film in black and white?!” and “Why is the aspect ratio not for widescreen?!” I was thinking that the cinema was having some technical problems and I was ready to demand for a refund for ruining my movie night. Seriously, the film was in black and white for so long that it can actually make you worry that it’s going to be that way for the rest of the movie. And the aspect ratio…why the heck would you want a 4:3 aspect ratio in the cinema?!
Naturally, the film eventually went into full color and to a 16:9 widescreen. Only the first part of the movie is in black and white, when we are shown Oscar’s past as a magician in a traveling circus. Everything went into full color as our magician steps onto the magical Land of Oz. I’m not sure if this was part of the plan but that particular scene was stunningly beautiful and colourfully vivid because you’ve already somehow gotten used to the black and white and sepia of the first part of the movie. It was magical and colourful and it reminded me of Alice in Wonderland. I can imagine this to be even more stunning in 3D. 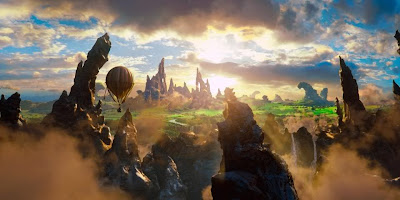 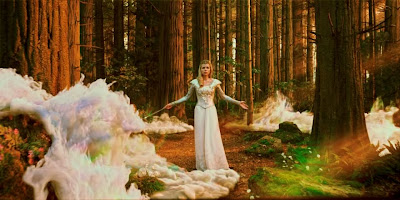 The CGI of Oz was good on its own, but add our live actors to the scene and it becomes ruined. There were more than a few parts where the characters looked superimposed on the background, and it’s a shame because it breaks the illusion of actually being in the magical land. It’s not hard to imagine them acting in front of the green screen the whole time. At some point, you might feel you’re watching Shrek instead of a live action movie. Well, at least it was so much better than that of Jack the Giant Slayer (check out my review here).
I’m not sure if I’m happy about James Franco playing the role of our wizard. He does play well the part about Oscar being a charming lady-killer I mean c’mon, that huge smile has got to be good for something, right? In doing the magician part though, I don’t think so. Was he entertaining as a theatrical showman? Not very much. Was he intimidating as a powerful wizard? Not so much either.  You’d probably agree with me more when I tell you that Johnny Depp andRobert Downey, Jr. has also been considered for the role. 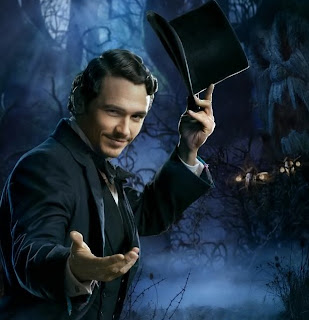 Story-wise, I loved the film. The movie was supposed to tell us how Oscar ended up as the feared wizard of Oz and it did just that, with added spectacle and humour. To be fair with the movie it’s actually funny, with much of the comic relief offered by Oscar’s loyal assistant, Finley the Flying Monkey voiced by Zach Braff (who was also Oscar’s circus assistant), and the very sensitive (and fragile) China Girl voiced by Joey King. The twist wasn’t unexpected (c’mon it’s not really hard to guess that Rachelle Weisz is really an evil witch) but it still manages to give you a surprise. It’s nice that our characters weren’t one dimensional, especially our Wicked Witches of the East (Rachel Weisz) and West (Mila Kunis). I should also mention the fact that the movie stays consistent to the original Wizard of Oz film, something that I was very thankful for. And who would forget the loveable Farmers, Munchkins, and Tinkers? 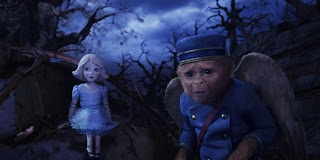 The movie wasn’t running on a linear plot, and you get surprised every now then, just like in a magic show. It was entertaining and I can actually say that I had fun as I went out of the cinema. It’s easy to say that Oscar’s story is equally as interesting as that of Dorothy’s.
I’ve learned that Disney has already approved plans for a possible sequel based directly on The Wonderful Wizard of Oz film. Here we go again with our crossed fingers.