Legends Unite: A Rise of the Guardians Review

I’ve been looking forward to seeing this movie. The first time I’ve seen the posters, I immediately recognized Santa Clause, Sandman, and the Easter Bunny. The other characters though made me think and research a little bit to find out that they are Jack Frost, The Boogeyman, and the Tooth Fairy (c’mon you gotta admit, the tooth fairy didn’t really look much of a toothfairy, more of a pixie or a siren-bird hybrid. Still lovely though).
When I saw the posters I thought “hey, this is cool! Just like a bedtime story version of the Avengers”. It’s amazing to think of the legends we believe in as kids come together to fight the one bad guy who always hides in our closets or under our beds. Pretty much how I felt like when I was excited about watching all our familiar video game characters come together in Wreck it Ralph. 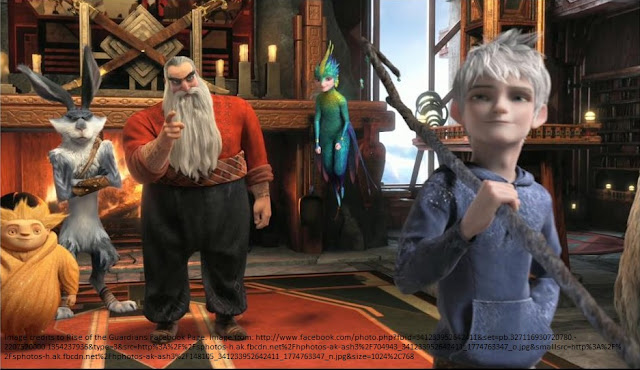 Based on William Joyce’s The Guardians of Childhood books, Rise of the Guardians shows us our much loved legends – Santa Clause (whose name apparently is North), the Tooth Fairy, the Easter Bunny (Bunnymund), and the Sandman (Sandy), come together and unite against the threat post by Pitch Black, more popularly known as the Boogeyman. The Man in the Moon, a seemingly powerful spirit, gave the task to the legends mentioned above to be the Guardians dedicated to protecting children everywhere – whether good or bad, naughty or nice. The Guardians come together as Pitch threatens to stop the children from believing in them, allowing him to spread his nightmare and cover the world in darkness and fear.
The four Guardians seemed already enough, but the Man in the Moon didn’t think so. He chose Jack Frost to be one of the Guardians and help them defeat Pitch and his fear-seeking Nightmares. Together, these five superheroes will work together to save the children from fear and keep them believing.
Speaking of superheroes, yep, our main characters in the movie seemed like superheroes to me, each with their own special skills and amazing superpowers. Who would’ve imagined Santa Clause to be wielding swords, or the Easter Bunny to be very skilled in combat with a boomerang? The movie gave our beloved characters a different look and personality that what we hear from the stories, but not to the point where they get distorted and become totally different characters. Santa Clause is still Santa Clause, and the Easter Bunny is still the Easter Bunny…only waaay cooler. Same goes for the other guardians. They all seem to be guiding a certain part of childhood. They each have a “center”. Here are their sort of responsibilities the way I understood it: 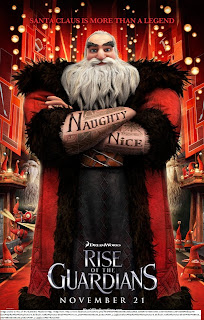 North aka Santa Clause (voiced by Alec Baldwin) – Guardian of Wonder, as expressed by his “big, wonderful eyes”. He’s also the leader of the Guardians, who has a Russian appearance and accent. 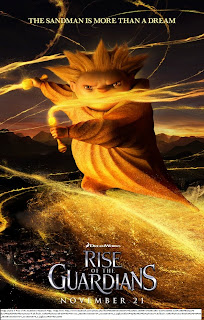 Sandy aka the Sandman (voiced by uhh..no one. He can’t speak) – Guardian of Dreams. Gives us the nice dreams we had when we were kids. 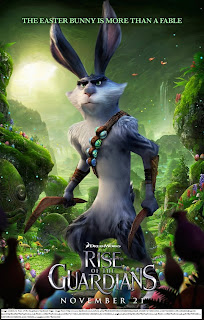 E.Aster Bunnymund aka the Easter Bunny (voiced by Hugh Jackman) – Guardian of Hope, and the one responsible for giving us Easter eggs for us to find. He’s got an Australian accent, which is why you can’t blame Jack for mistaking him for a Kangaroo. And hey he’s got boomerangs!
See also 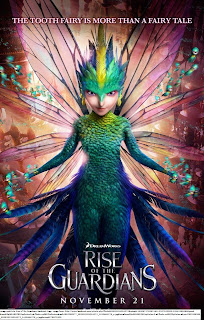 Tooth Fairy (voiced by Isla Fisher) – collects the kids teeth in exchange for coins. The teeth holds children’s’ memories and the Tooth Fairy helps us remember them when we need to the most. 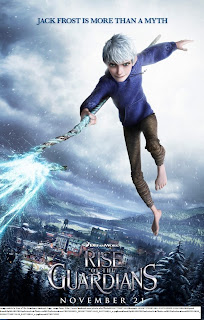 Jack the Frost (voiced by Chris Pine) – Guardian of Fun. He’s the one who actually plays with the kids. 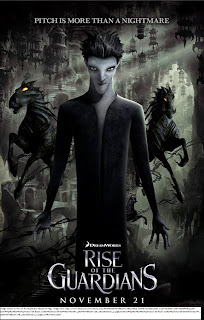 Pitch Black aka the Boogeyman (voiced by Jude Law) – He’s NOT A GUARDIAN but he’s worth mentioning anyways.
Okay, now down to whether it’s a good film or not. Well, it’s not a bad one and it’s also memorable but not one that would leave you feeling enchanted as you go out of the theater. The visuals and animation are superb, almost lifelike, and the special effects definitely give justice to the Guardian’s powers – take note of Sandy’s shape-shifting sands (say that 10 times). However, I was looking forward to more magic and awe from our main characters, given that they are well-known and powerful in their own rights. I was also waiting for some sort of war to happen where the Boogeyman and his Nightmares face the unified allied forces of the Guardians. Bottomline is I was expecting the Guardians to be more powerful, more amazing, or at least as magical as how they are told in the stories. What turned out was that they were like a small group of individuals, fighting off a powerful villain. This made their characters look weak and the plot feel typical.
Rise of the Guardians is a good movie to watch at home with your family, but that’s where I think it would be worth it to watch – at home. You can just wait for it to be released in DVDs or shown in HBO and not feel bad about not seeing it in the cinema. One thing’s for sure though, internet searches for Jack Frost will be going up, and more kids are now going to know more about him.