Hide or Seek: A “The Purge” Review

The Purge had a promising premise. A movie that features a fictional “holiday” where anybody can do anything that they want and get away with it, you’d expect this movie to give us complete chaos right? Well, it wasn’t exactly like that. 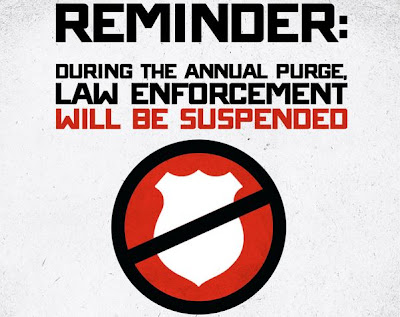 Set in the year 2022, the United States has been “reborn”, with crime and unemployment rates hitting an all-time low because of an annual event called “The Purge”, on which all forms of law enforcement are suspended and all kinds of crime becomes legal for 12 hours, giving citizens an avenue to vent out their aggression. James Sandin (Ethan Hawke), a security developer who makes a living by selling home security systems, tries to survive the night with his family by locking themselves inside their house as they usually do. However, the night takes a different turn when an outsider gains entry into their home.

Imagine a scenario where all forms of crime become legal – everything including murder, rape, theft…all of them! The Purge sells itself well with this premise, and although I can’t really say that it’s unique or original (a 1967 episode of Star Trek has a similar story, where a society is allowed pre-scheduled 12-hour periods of lawlessness and violence) I was fascinated by the idea. It would be like Hunger Games or Battle Royale with the whole country as the arena!
At least that was what I was hoping it would be. Sadly, it turned out to be very different. The whole movie revolved around a single household and the plot went from nationwide to domestic. The story ended up being about a family who was trying to defend their home from intruders, not about a country whose citizens are out to get each other. With a premise where anybody can do anything for 12 hours, the movie could have been more creative in showing what people did during that time period. They could have given us anarchy, pure pandemonium on the streets, family members turning against each other, people breaking into malls and supermarkets, looting whatever food, clothes, and gadgets they could find (admit it, this part is one of your fantasies). Why did they just give us a home-invasion thriller? Such a waste of potential if you ask me.
One thing that I liked about the movie though, is that it explored the social relevance of the Purge. Is this 12-hour event just an outlet for people to vent out the rage and violence that has been accepted (in the movie at least) as a part of human nature, or is this a tool for class dominance? Isn’t the Purge also a method for the dominant upper class to eliminate the “uncontributing” individuals in society? Those who cannot afford expensive security systems or weapons to defend themselves which ultimately, makes them easier targets for killing? The movie does well in being a social allegory, even going as far as having one of the characters say that a homeless person’s sole purpose is to be a victim in the Purge. The film shows us that in this future America, crime and unemployment may be low, but social inequality and class struggle are at their peak.
In spite of its social relevance, I’m still disappointed with how the film turned out. The Purge as an event turned out to be just a reason for the intruders to get into the Sandin Family’s home, instead of being the focal point of the film. There were several startling moments all right, but we’re also bombarded with a lot of suspense-thriller clichés.
The Purge was promising, but the film wasn’t able to exploit every bit of this potential. It didn’t have as much fun as I hoped it would, and it ended up being a home-invasion flick. Oh well, maybe we’ll see more of that promise in the sequel that’s currently in development.
Ethan Hawke as James Sandin
Lena Headey as Mary Sandin
Max Burkholder as Charlie Sandin
Adelaide Kane as Zoey Sandin
Edwin Hodge as Bloody Stranger
Rhys Wakefield as Polite Leader
Tony Oller as Henry
Arija Bareikis as Mrs. Grace Ferrin
Tom Yi as Mr. Cali
Chris Mulkey as Mr. Halverson
Tisha French as Mrs. Halverson
Dana Bunch as Mr. Ferrin
Peter Gvozdas as Dr. Peter Buynak
Karen Strassman as journalist
Peter Jones as the Boss
Directed by: James DeMonaco
Credits to the images and videos used in this post go to “The Purge” and/or to their respective owners. I do not own these materials. No copyright infringement intended.