Good to be Bad: A Wreck it Ralph Review 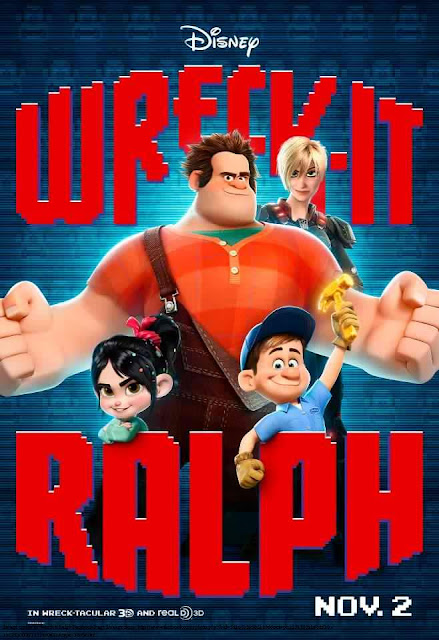 “I’m bad, and that’s good
I’ll never be good, and that’s not bad
I will always be me.”
The Lines above is the “oath” that the members of the Bad-Annon, a support group for computer game villains, say after they have their regular meetings. It was cute actually, watching all these bad guys in Wreck It Ralph come together and express their frustrations for…well…being a bad guy. At the same time it felt so cool watching all these amazing characters come together in a single movie.
I watched Wreck it Ralph as one of my free movies for getting SM Cinema’s e-PLUS card. I still remember when I first saw its trailer on Facebook, I thought “Gamers are going to love this movie”. And I’m sure they did! We did! I was looking forward to watching it on 3D, but it wasn’t on 3D on that day so maybe next time. Nevertheless, I had a great time watching it.
Wreck it Ralph tells us the story of well, Wreck it Ralph (John C. Reilel), a bad guy in the arcade game “Fix it Felix, Jr”, who has gotten tired of being the bad guy. He never gets any medals, he never gets recognized, and most of all he always gets thrown into the mud. Ralph didn’t want to be a bad guy anymore. He wanted to be acknowledged and he thought the best way to accomplish this is to get himself a medal. And you know how it is in video games. Bad guys never get medals.
And so started Ralph’s adventures in securing a medal. The child in me stirred as I recalled the many video games I used to play. There was Sonic, Ken and Ryu, Bowser, M. Bison, and even Pac-man! More than the plot, I enjoyed watching all these characters come together in a single monitor…I mean screen! 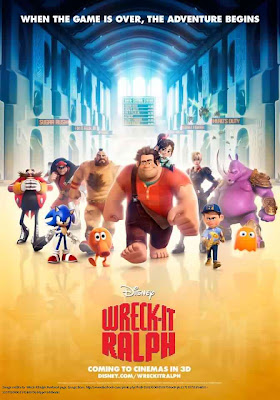 Wreck it Ralph showed us a different perspective of gaming as we are presented the bad guys’ point of view. Bad guys as they are, they are still lovable, as they play a big part in our enjoyment of the games we used to play. We also explore a different world in the movie. Well it’s true that most movies nowadays introduce us to a new world, but Wreck it Ralph is different because we have been a part of this world when we played these games as kids. Ever played a video game when you were a child, and you imagine yourself inside the video game, exploring the map yourself,  badass and good at what you do? I did. Which is why watching this movie felt magical because I finally got the chance to “see” and go beyond what is shown in the computer screen.
Everything about the movie was fun! Just as it should be. The animation of the characters kept the gaming feel, keeping their movements and the surroundings consistent with the gaming theme. The soundtrack also reminded me of video game arcades and consoles. I truly felt like a kid again as I was watching it!
I recognized two recurring themes in the movie though. One is about breaking conventions, and the other one is being happy with who you are. A bit contradictory if you think about it. Let me elaborate a bit.
“Stick to the Code”: About Breaking Conventions
Whenever Ralph expressed his desire for recognition and weariness of being the bad guy, someone always tells him to “Stick to the Code”.  This is actually said several times in the movie. I felt that this is reminiscent of the conventions and stereotypes that we have in our society.  We are often told to do or not to do things just because it is the consensus. “Don’t get a tattoo, it’s unprofessional”, “You’re born in a poor family, you’ll never be successful”, “Don’t support gay marriage, it’s not natural”, “ Don’t break the conventions, just stick to the code”. Aren’t we getting tired of all these unwritten restrictions we follow? If you think about it, society is very much like a video game. There is a set of rules or codes that everyone follows unquestionably, sometimes blindly. But Ralph doesn’t let the codes dictate his life. He breaks the conventions and decides to be what he wanted to be.
“There’s no one I’d rather be, than me”
The movie also tells us that we are good as who we are. We should not wish we were someone else. Ralph hated who he was and he wished to be something else, forgetting that his existence is the necessary half of the game. This part however, if viewed from a certain angle, contradicts breaking conventions because it tells us that things are already good as they are. No need to break conventions. Ralph should just “stick to the code” so he doesn’t get problems.
As Ralph did, I’d rather not let a code take control of my life. I can be, and will be who I wanted to be. At the same time I love myself for being myself. It’s okay to stand out, be different and break conventions every now and then because it’s what makes us human.  It’s what separates us from video games characters who have to follow a code. At the same time, look into your own beauty as a person and don’t wish you were somebody else.  Just like how Ralph loved being “the bad guy”. Because in being so, he was good.