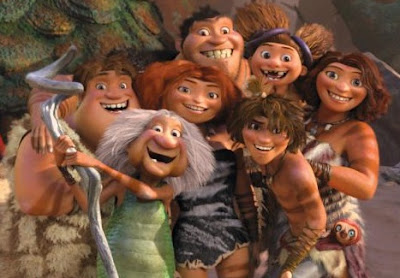 I don’t know what it is about DreamWorks animated films but I always tend to love each one, no matter how predictable, clichéd, and sometimes silly they are.
The Croods is a family of Neanderthal Cavemen (Homo Sapiens Neanderthalensis according to Wikipedia) living in the prehistoric era known as the “Croodaceous” period – a dangerous time when large, carnivorous creatures roamed the planet. Many of the human families they know are already either eaten or died of diseases, but the Croods managed to survive because of the strict rules of Grug (Nicholas Cage), the overprotective father of the family. They stay most of the time inside their cave and living by the principle that anything new is dangerous and that curiosity can only lead to death.
All this change as they are forced out of their cave because of the changing landscape of the planet. Together with Guy (Ryan Reynolds), an intelligent boy they meet with a lot of innovative ideas, the family breaks away from their comfort zone as they travel and go on an adventure towards the paradise they nicknamed “Tomorrow”.
The film was fast-paced, and at the start of the film we already get an idea of how adrenaline-filled it will be.  We immediately see the Croods competing with other animals for breakfast football-style as everyone jumps, tackles, and outwits each other to get just a single piece of egg. The movie was full of energy all throughout – consistent with the Fight or Flight world the Croods are in where everything is out to get each other for lunch.
The thing with movies about families is you can’t help but worry that something bad is going to happen to one of the members or that one of them would get into big trouble. Thankfully, you don’t have to worry about this with the Croods as you know that every member of the family is tough. Heck, even the baby was scary and the grandma just won’t die. Getting rid of the worry lets you enjoy more the fun part of the film, like the crazy antics of each family member, their reaction to anything new, and the weird but fantastical creatures they encounter. Ever heard of a “Macawnivore”(later called Chunk), a fierce but cute cross between a macaw and a sabertooth? How about “Piranhakeets”(yep, piranhas and parakeets. What could be worse than piranhas with wings?)?
See also

Okay so obviously this is a family-oriented film. But just because it is one doesn’t mean that only sheltered kids and extra-perky moms are going to love it. The movie keeps up a good energy for the whole one and a half hours and that was enough to keep someone like me who was neither a kid nor a parent entertained. The plot was very typical of DreamWorks animations recipe – you know, where we meet crazy characters, then an unusual conflict comes up, a cheesy resolution happens, and finally ending with a happily ever after towards the sunset. But like I said, there’s something about these animated films that make them so loveable, in spite of everyone already knowing the usual routine and the slapstick humour. Maybe it’s the cute characters? Or the animation itself? Or maybe it’s just that these films always hit the right spot where we wish we were kids again. 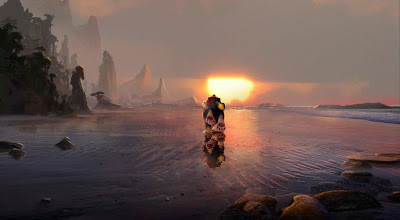 Credit to all the images in this post go to the “The Croods” Facebook page. I do not own these images. No copyright infringement intended.