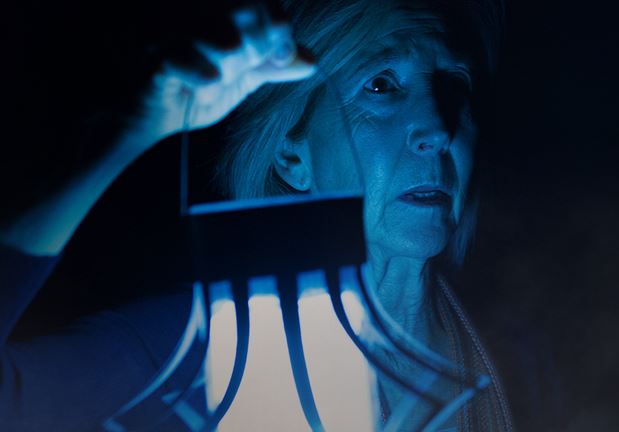 “I always wanted to know how I will go. Please tell me friend, how I will end.”
Just like the first movie, the third chapter of the Insidious Franchise got me exclaiming “oh shit!” every now and then. It’s full of startling scare tactics that I wouldn’t recommend this to anyone who has a weak heart.
Quinn Brenner (Stephanie Scott) is convinced that her dead mom is trying to get in touch with her from the afterlife. She asks for the help of Elise (Lin Shayne), a psychic who can communicate with the dead. Elise discovers that someone really is reaching out to Quinn from the other side…but it isn’t her mom, but someone (or something) else who is both sinister and powerful.

It would seem that Elise has become a major, central character in the whole Insidious franchise, that the filmmakers had to make a prequel so she can star in one more film. I’m not complaining though because Lin Shayne’s portrayal of the character works, giving us a good mix of badass, cute, and creepy. Now I wish they didn’t kill off the character too early.

The plot in itself isn’t really that disturbing or offers anything new. The story isn’t what makes the film scary, instead it relied on sudden, startling shocks when it tries to frighten the audience. It’s not gonna make me afraid of the dark but the screamer-ish scares were fun so I enjoyed the whole thing nonetheless.  You know how a magician provides you with a distraction, usually a pretty assistant, so your eyes get fixed where he wants them to, then out of nowhere, the magic happens somewhere else? The film pretty much does the same thing! It leads your attention into something – and your tendency is to focus because you don’t want to be taken by surprise – and then out of nowhere some startling thing happens where you don’t expect it to! It’s an old trick but hey, it’s fun, and keeps you on your toes.

If we compare it to its predecessors, it’s not as good as the original but it’s definitely an improvement to the sequel. It was more tied to the original Insidious film, with some recurring elements, themes, and especially characters. Insidious 3 was less disturbing but still enjoyable, especially with the hints of comic relief from Specs and Tucker (Leigh Whannell and Angus Sampson), and even from Elise herself. The downside though is that it ruined the illusion of authenticity and the serious tone of the film, which is important if you want to make a horror movie actually scary.
***
The sequel and even this prequel still doesn’t level with the first ever Insidious movie,. I must say though that I still found this latest installment to be enjoyable. In spite of the “scary” factor really just coming from the startling noises and sudden shocks, the film was still able to make me let out a few expletives as I was seeing it in the cinema.

Credits to the images and videos used in this post go to “Insidious: Chapter 3” and/or to their respective owners. I do not own these materials. No copyright infringement intended.