Erased Expat: A “The Expatriate” Review 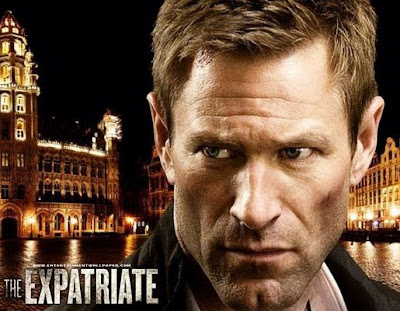 This is one of those movies that would give you a good first impression, but would end up being unmemorable. At the start it was intriguing, but at some point I found my eyelids starting to get heavy of boredom.
The Expatriate tells us of ex-CIA agent Ben Logan (Aaron Eckhart) who was trying to live a normal life outside of the US with his estranged daughter, Amy (Liana Liberato. Yeah, I haven’t heard of her either). One day however, the new life that they were trying to build starts crumbling down when Ben’s co-workers, the company he works for, and all of his records as an expat mysteriously disappear.

The Expatriate was re-titled and released as “Erased” in the United States because of piracy issues with its early DVD release. How they were going to effectively prevent piracy of the movie by changing its title beats me but hey, all that move did was give me a headache.

It’s easy for the movie to get your attention on first look. The trailer is intriguing enough, and the first few parts of the film can actually keep you guessing and wonder why things are happening as they do. Thing is, the trailer pretty much already tells you what the whole movie is going to be about. It gets your attention with the whole “erased identity” thing, then right after that it’s just a series of action-thriller clichés being thrown right at you – the typical chase, the spoiled daughter, and of course, the CIA. Whenever something fishy’s going on the CIA has always got something to do with it, do they?
The only thing that’s probably worse than the storyline itself would be the acting performance. I couldn’t figure out what Olga Kurylenko was trying to project with her depiction of her character. She’s got only one expression all throughout the movie, and you can’t feel the character’s internal struggle which I think would have been a good anchor for character build-up.
Liana Liberato on the other hand, was just irritating and unrealistic as Ben’s daughter. I don’t know if it was the way the character was supposed to be, but surely you won’t prioritize your daddy issues when you’re about to be killed right?
And speaking of the daddy, Aaron Eckhart was just his usual self in this movie. He doesn’t really show us anything out of the ordinary, and he actually looked as bored as I was, like he can’t wait for the whole damn thing to be over. Oh well, at least he wasn’t a politician in this one for a change.
The Expatriate felt like a lame attempt at being something like Pierre Morel’s “Taken”. The potential was there, but the barrage of clichés and the poor acting made it miserably boring.

Madness in a Mirror: An “Oculus” Review