Don’t Get Busted!: An Argo Review 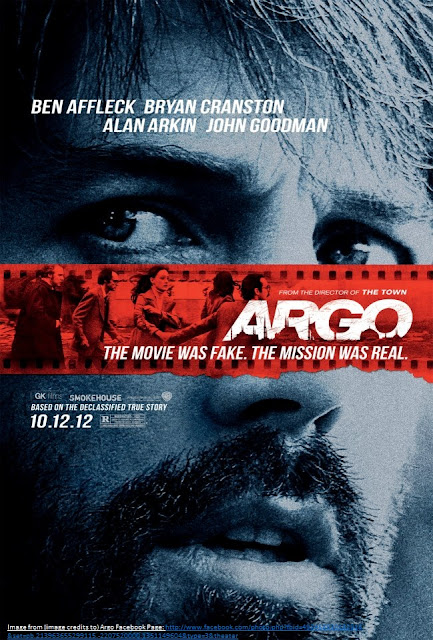 So Argo just made it to my favorite movies list.
Interesting plot – check. Believable acting – check. Felt like the movie was one big climax – check. That amazed feeling that you get because you know the film is based on a true story – check and recheck.
*Warning: some spoilers. Just subtle ones, don’t worry*
Based on a real event that happened during the Iranian Revolution in 1979, Argo tells us how CIA Specialist Tony Mendez (played by Ben Affleck) went on a rescue mission to get six US embassy staff back to the United States from a then revolting Iran. At the start of the film, we get a short history lesson where it was narrated how the Iranian revolutionaries took over the US Embassy during their protest at the US’ support for the Shah, Mohammad Reza Pahlavi, who they removed from power. Several staff members were held hostage within what used to be the embassy. However, six of them escaped and hid at the Canadian ambassador Ken Taylor’s (Victor Garber – remember him from Alias?) home. This is where the story starts to roll. Tony has to find out a way to get the staff out of Iran without getting caught. And apparently, the “best bad idea” he came up with was to create a cover where he is a film producer making a sci-fi film with the six Americans as his crew.
Seems like not a very good idea right? But apparently this is the most feasible one. Many proposals were brought forward during the consultation but every one has flaws pointed out by Tony… Ah, this scene where ideas were proposed…kinda reminded me of when I used to be in an agency and we had to pitch to our clients, and competitively against other agencies.
The cover was prepared at a grand scale. They’re not going to Iran and just tell a lie. If they had to lie it had to be a real one. Together with John Chambers (John Goodman), a hollywood make-up artist, and film producer Lester Siegel (Alan Arkin), Tony set-up a fake company, an office, got a good script, a cast, and even came up with a press-release for the sci-fi movie Argo – hence the title.
The best parts were undoubtedly the ones where Tony and his “crew” were trying to avoid detection by the revolutionary army and the locals. This is ironic because they’re trying to hide by going showing themselves outside. To make their cover believable, they go to a Bazaar where they pretended to do a little research for their film. During this short trip, they had to drive through an angry mob, get confronted by an angry local…ugh there’s tension everywhere. The scenes where they had to go outside and expose themselves are the ones where your heartbeat quickens and you hold on to your seats, hoping they don’t get busted. Ben Affleck’s direction and scoring is so good that these scenes felt so real, you can easily imagine you’re one of the hiding Americans, and that if they’re caught you’re busted too. You know that feeling when you’re hiding something from your mom, but you had to confront her and you had to act normal while keeping whatever it is you’re hiding? That’s how these particular scenes felt like. The movie plays with our innate fear of getting caught, of taking risks. And this captures the audience so well because this is something everyone can relate to.
Although the actors and actresses who starred in the film portrayed their roles well, there was not much character development especially with the six hiding Americans. We get a glimpse of their personalities but most of the time they are just seen as a single unit – the “item” in the movie that needs saving.
According to Wikipedia, there have also been some historical inaccuracies in the film. I don’t have a problem with that though since the movie is just “based” on a story, and it does not necessarily have to tell exactly what happened during this event in the Iranian Revolution.
At the end of the film, they show pictures of the real events during the Iranian Revolution, together with the scenes they showed in the movie. It’s fascinating how they made an effort to re-enact the scenes in the real pictures of the revolution in Iran. What’s more fascinating is the uncanny resemblance of the actors in the film, to the real life characters they are portraying.
Argo got me engrossed because at the back of my mind, I know that the things I am seeing in the movie happened in real life. It makes you imagine and think – what if I’m the one held hostage? What if I’m Tony Mendez and I’m responsible for these people’s lives? Would I be brave enough to face the situation as the characters in the movie did? It’s a bit scary knowing that these things could happen to you in real life because they have happened in real life. And I think this is one of the key points where the success of Argo came from. Making the audience think that hey, this could be you. 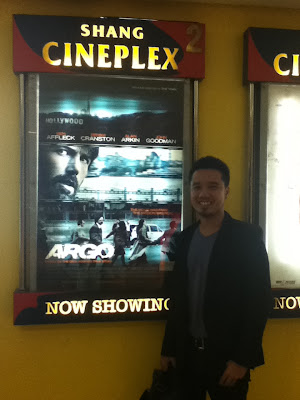