The best way to describe Miss Peregrine’s Home for Peculiar Children, would probably be to imagine it as some sort of weird mash-up of “X-Men”, “Harry Potter”, and a little bit of “A Series of Unfortunate Events”. From here alone you can already tell that you shouldn’t expect a lot from the originality department. But hey, if it’s a movie about the creepies and the out of this world, I wouldn’t be able to keep myself from seeing it. 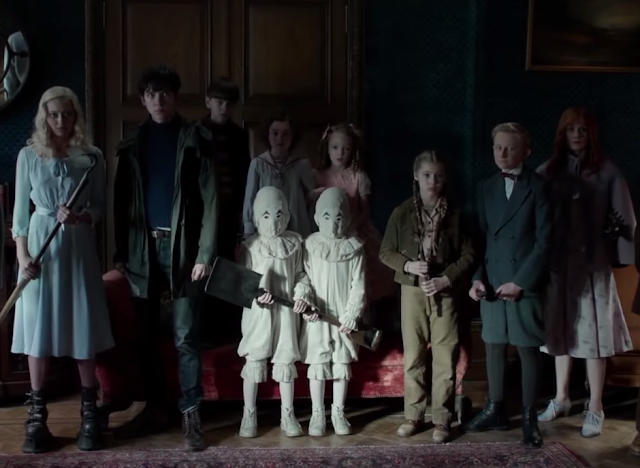 Jake Portman grew up to fantastic bedtime stories of kids with special abilities and invisible monsters, told to him by his grandfather. When his grandfather mysteriously dies from a horrific attack by an unknown assailant, Jake travels to Wales to investigate. Here he discovers Miss Peregrine’s Home for peculiar children, and finds out that the tales he grew up with are actually real. However, this also meant that the monsters in his grandfather’s stories also exist, and that he may be the only chance that the children has to be able to fight back.

Okay first things first – I haven’t read the novel so I can’t really tell you in this review if the film did justice to the book or if Tim Burton was able to fully capture the world created by author Ransom Riggs. Still, the premise is pretty interesting, and Eva Green’s name in the poster is enough reason for me to see the movie even if I haven’t yet read the book.

Right at the start you can already tell that this is going to be one of those messianic movies, where our lead character who seems ordinary from the start turns out to be this extraordinary “chosen one” who is the only hope to save everybody else from the bad guys. Act 1 seemed to have Harry Potter written all over it, although I didn’t mind because the dark and heavy tone keeps you glued to the screen. Something was telling me that this wasn’t going to be just another kid-friendly fantasy movie.
It started out pretty well, and is actually intriguing enough for you to hold that pee break so you can find out what happens next. However, when we get to the part when Jake discovers the Home, the storyline started to become dragging by dwelling too much on explaining the children’s peculiarities, and the technicalities of the time loop they are in. The introduction of the bad guys didn’t help either, as we are dragged into a hurried narrative, which frankly got me lost along the way.
See also
geoffreview·
Movies
·May 16, 2013

I don’t even know where to start about how underwhelming the bad guys are. For somebody who have been a threat to other peculiars for many years, the antagonists were easily defeated by our amateur good guys. I dunno, maybe it’s because of the fact that Mr. Barron, Samuel Jackson’s character, does a loooooot of talking and not really much fighting effectively. The underdeveloped supporting characters didn’t help much either, and the story won’t actually be affected if ever we remove one or two.

Some parts of the movie also felt rushed, as we jump from one scene to another, without much consideration for time and spatial differences. At some point I wonder if Tim Burton got tired and just hurried everything to get it over with.
Regardless of the rant that this review ended up being, I’m pretty sure Miss Peregrine’s Home for Peculiar Childrenwould still appeal to a certain audience. Definitely not for the small kids as some scenes may be too terrifying, but maybe to those who are fond of the curious and the crazy. To be fair, if talking about the peculiar, the film did deliver, and to some this may already be good enough.

Credits to the images and videos used in this post go to “Miss Peregrine’s Home for Peculiar Children” and/or to their respective owners. We do not own these materials. No copyright infringement intended.