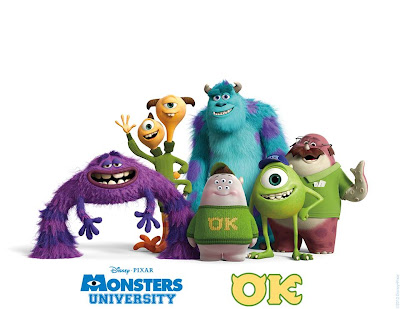 One thing I realized after I watched Monsters University is that it’s actually more fun watching a Pixar film when you’re with a kid. Trust me, the fun that they’re having is infectious and you’d enjoy the movie ten times more.
Monsters University is the prequel to the 2001 film Monsters, Inc. (Yep, it’s been that long. You should already feel old now). Michael “Mike” Wazowski (Billy Crystal) dreams of becoming a “Scarer” so he enters the scaring program of Monsters University. There he meets James “Sulley” Sullivan (John Goodman) who becomes his personal rival as they compete with each other in proving who the better Scarer is. The circumstances however had them end up as teammates in the annual Scare Games and from here, the hilarious competition between the two just intensifies.
Wow, this movie reminded me so much of college. Not that my uni was full of crazy monsters (or maybe it was?) but the movie did make me reminisce of university days. But question is, why were we taken by Pixar all the way back to when Mike and Sully were still studes? The follow-up to the success that was Monsters, Inc. that I was expecting, would have been a sequel where we could have seen how the monsters were faring with the making-kids-laugh-instead-of-scream business.  Surprisingly though, Pixar decided to back-track and show us how Mike and Sully were awkward dudes back in college and dealing with their fitting-in issues (which, to be honest, is actually a high school thing).
I also thought that it wasn’t very inventive with the plot. Okay we’ve already established that the set-up’s going to be on a university, but on which scenario would it run? Where would the conflict come from? The best idea that Pixar came up with was to hold a school competition. Right, like we haven’t seen the before in movies about college.
But I guess what saved Monsters University is that  it got more creative in experimenting with the concept of “monsters” where they can actually come up with any character imaginable and still get away with it. It was fun looking at how monsters cope with college with each of their own quirky uniqueness. The whole movie’s humour basically came from the peculiarity of each character. It sure was funny, I found myself actually laughing instead of the usual grunts that I do when watching comedy. Monsters University did well in the humour department and that’s great because it has to make up for its lack of emphasis on the usual Pixar essentials. It wasn’t that touching, there wasn’t any definite moral lesson, but it sure was damn funny.
Monsters University is one great family flick that the kids will surely enjoy. Some guys like me might find this fun as well if they’ve also had an awesome college life. But don’t expect something to the level of the Pixar classics like Wall-E, Toy Story or UP.
Credits to all the images used in this post go to their the Monsters University Facebook page and/or to their respective owners. I do not own these images. No copyright infringement intended.
If you’re anywhere in the Philippines, check out the SM Cinema’s website here to conveniently purchase and reserve your tickets to the blockbuster movies you’ve been watching out for.
See also
2