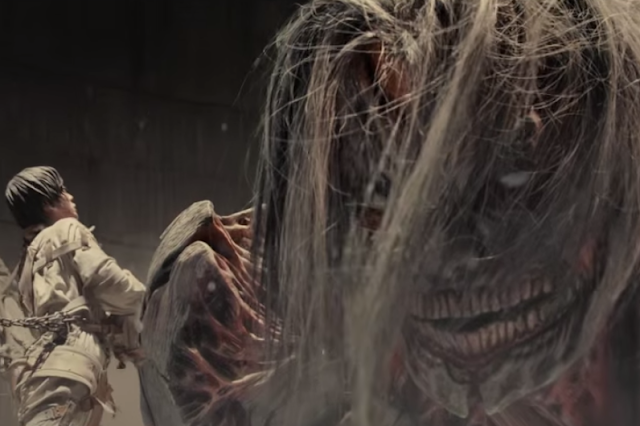 I entered the cinema wondering if this is worth spending my hard earned money for, and contemplating the fact that nobody wanted to come along with me to see this particular film. Spending over 200 bucks on a movie I’m reluctant about seeing is already bad on its own, but entering the theater without anyone with me is just adding insult to injury. As expected, the number of attendees would probably fit comfortably into just one row of seats. At least not a lot of people would see my misery.
I stared blankly at the screen for roughly one and a half hours. The first Attack on Titan movie already had me prepared for this moment – one where I would drown in disappointments, and frown at the sloppy and substandard form of an Anime that I oh so loved. The difference is that this time, I’m no longer throwing my fists at the plot’s inaccuracies, and the blasphemous portrayal of well-loved anime characters. I’m immune. Calloused. Impervious the fact that an anime with so much potential as a live-action film has already been wasted, and most likely thrown into the dark annals of adaptation-abominations alongside Dragonball Evolution and The Last Airbender.

In spite of groundless hopes that the second part of the live-action adaptation of Attack on Titan would somehow miraculously redeem the first part of the franchise, the sequel turned out to be just as lame as its predecessor. It’s a barrage of fake blood, cardboard-cutout characters, underwhelming action sequences – all balancing gravely on a rickety storyline. And no, I cannot forgive the noticeable green screen SFX either. It was a disaster, and there’s nothing I can do but munch on my cold, soggy fries, as I watched one of my favorite anime get massacred by this dreadful excuse of an adaptation.

But still, I was curious to find out how the film would end the story, given that a lot of things are still left answered by the anime and the manga. After all the disappointments I’ve been through, I knew it was wise to tread with caution and lower my expectations. True enough, the film hurriedly finished the plot, not just in the sense that it was all over in less than 2 hours, but also with the fact that resolutions seemed to be randomly thrown around to patch-up holes in the storyline. It was as if the writers suddenly lost motivation and creativity, and decided to just use up whatever is currently in their hands to give uninspired explanations to the questions left by the film. What are the Titans? Where did they come from? Who is the Colossal Titan? Trust me, don’t expect mind-blowing answers to these supposedly intriguing questions.

***
Attack on Titan Part 2 lived up to the standards set by the first movie, which are really hardly any standard at all. You probably don’t need me anymore to tell you not to expect a lot from the sequel. Heck I’d even tell you to go watch a different movie instead.

Credits to the images and videos used in this post go to “Shingeki no Kyojin: Attack on Titan Part 2” and/or to their respective owners. I do not own these materials. No copyright infringement intended.