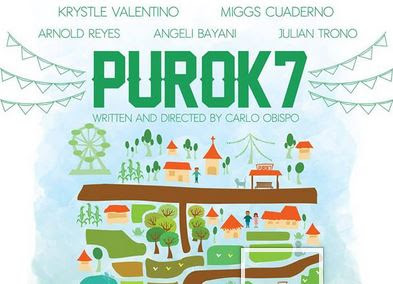 To be honest Purok 7 (said as “Purok Siyete”, in case you’ve read that as “Purok Seven” as I initially did), wasn’t one of my top picks to watch in this year’s Cinemalaya. I mean c’mon, the trailer doesn’t look as exciting as Babagwa and Porno *ahem* or as fun as Ekstra and Instant Mommy. But I decided to watch anyways because the lead actress intrigued me. I don’t remember seeing her in any film before but her look and the way she acted in the trailers were so natural that I decided to give this one a shot – and I’m glad that I did.
Diana (Krystle Valentino) is a 14 year-old girl who lives in a remote purok in the countryside with her younger brother. They live by themselves when their mother went abroad to work and their father went to live with another woman. They live a simple but happy life in their small town, but they must get-together as a family to face an issue that may shatter their relationships with each other.

Purok 7 fully captures the essence of countryside living, showing us the humble but satisfied lifestyle of the townsfolk, and how the kids find joy in simple things that are part of their daily routine. The film was light and quiet, a feel-good movie which effectively depicted rural life, that at some point it made me reminisce of my childhood that I spent growing up in the province. It shows us a different perspective of not being rich, one where it is easy to find joy in the simplest things if you just know how to appreciate what you have.
Krystle was loveable and moving as the young but liable Diana, who took it upon herself to take care of her younger brother when their parents were not around. Krystle is able to make you feel the conflict within the character, and effectively project to the audience that behind the façade of a reliable older sister who is a bit too mature for her age, is an innocent child who would have wanted to enjoy her youth. There were instances though that her acting was becoming unnatural particularly with the way she delivers her lines, but for the most part she efficiently portrays the role.
The film uses an emotional approach to engage the audience. It was a real tear-jerker, able to make you feel the grief of the characters even when they’re not speaking lines. Amidst all the innocent fun that the siblings have as they try to live the day by, there are hints of sadness when focus turns to their family. The remarkable scoring reinforced all of these. Of course, there’s also Diana’s budding crush for Jeremy (Julian Trono) which can make you giddy and giggle at their puppy love scenes, although I should say that dance number was a bit out of place. 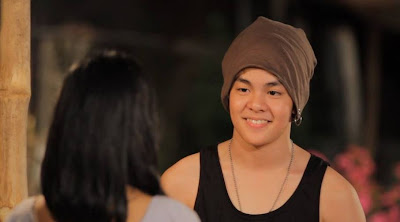 This movie also reminded me of Maryo J. de los Reyes’ Magnifico. The way that the townsfolk empathize with the children, the town fair scene, and of course the emotional and filial approach, was very reminiscent of the 2003 film.
Purok 7 was unexpectedly one of the best entries I have seen in this year’s Cinemalaya Festival. It was light, innocent, and most of all real and relatable. It’s a feel-good movie that stands out from the other louder and heavier entries.

Krystle Valentino
Miggs Cuaderno
Arnold Reyes
Angeli Bayani
Julian Trono
Carlon Matobato
Sheenly Vee Gener
DIRECTED BY: Carlo Obispo
Credits to the images and videos used in this post go to “Purok 7” and/or to their respective owners. I do not own these materials. No copyright infringement intended.