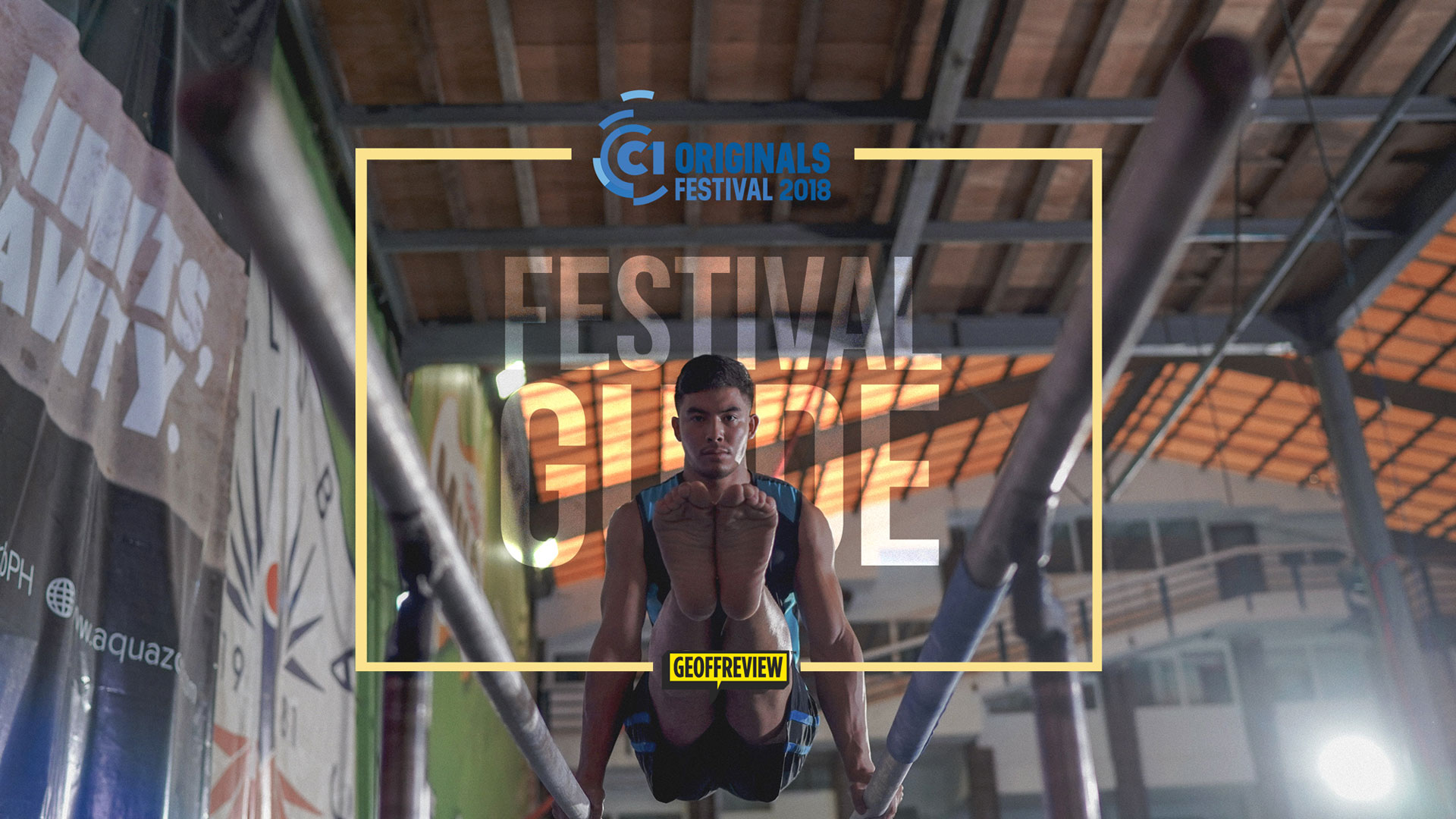 Cinema One Originals 2018 is just a few days away. This year, with the theme “I Am Original”, the long-running fest is slated to serve nine new feature films, twelve shorts, and premieres for the restored versions of two of the most iconic movies in Philippine history.

We have made a nifty one-page guide to the forthcoming fest, the 2018 Cinema One Originals Festival. Here, you’ll find a guide complete with key information on films, trailers, screening schedules, ticket information, and more.

To get us started, here are the films that will screen this year.

There are nine (9) feature films competing this year. There’s a very interesting mix of stories at play here, from found mockumentaries, sports drama, to animation heavy drama. Check out the entries below.

A Short History of a Few Bad Things

Synopsis: “In the southern Philippine city of Cebu a troubled detective struggles to solve a series of grisly killings, while a deep conspiracy works to keep the truth just out of his reach.”

Synopsis: “ASUANG, the God of Sins, was once a ruthless and fickle God of Bicol, but now he is a loner and a loser who has no place in the world that is overrun by sinful human beings. He resorted to social media to regain his former glory and fame but to no avail. On his track to retirement, he was approached by the Seers to help them stop Armageddon. Along with a group of sinful misfits, Asuang will go on a quest, against his nature, to help mankind… Or so he thinks he will. “

Synopsis: “A year ago, Badger is one of the best gymnasts in the Philippines. He wants to be the very best, until his reckless best friend sabotaged his athletic career. Now, Badger is miserably working as a distributor, selling alcoholic beverages to the managers of bars and supermarkets. To his delight, Badger receives a new opportunity to pursue his quest to be the best Filipino gymnast. He immediately resigns from his job. His reckless best friend, who fulfills his desires through this job, gets pissed and vows to stop Badger’s dreams once again.”

Synopsis: “After surviving what seems to be a drug-related incident that left her sister, LIAN, in a coma, LESLIE, a budding 20-something artist, is left in deep grief. With great guilt, Leslie is forced by her parents to go to a rehabilitation facility to recover from her drug dependency. As Leslie stays longer, she gets to uncover even more mysteries and secrets. She would later realize that the promised change is actually more sinister than it seems, and she has to do something before it’s too late.”

Mamu; and a Mother Too!

Synopsis: “A transgender sex worker in her late 40s along Fields Avenue whose only aspiration is to have breast implants for her profession unexpectedly assumes the role of a mother to her orphaned niece, a transgender youth who is only beginning to discover her own sexuality. As she works more shifts to save for her implants, troubles arise when she begins to feel the weight of her struggles – being an aging sex worker in fast-evolving society, a partner to her young fiancé, and a parent to a teenager she just met. Her difficult confrontations eventually lead her to a new attitude towards life, and a unique recipe to a famous Kapampangan dish, Sisig.”

Synopsis: “Q is an aging spy in search of a monster known as The Shadow – a rumored darkness fabricated by the media as a murderer with a grudge against promiscuous women. His wife, M, is taunted by a haunted closet and low television signal range in their mountaintop mansion. Alex, their son, is your typical boy at the verge of maturity experimenting both sexually and emotionally. Things head south for the family when The Shadow impregnates M and Q must find a cure in time for Alex’s college graduation at week’s end. The game then finally begins. In these dire straits, Q begins the process of fisting. He lays out the bodies of evidence before him: creatures hidden in museums, the difficult man befriended by his son, and ladies of the night who sit on hard secrets. He eases into them like a man carefully dipping his hand into a tub of warm water. But Q is still sucked violently into this dark hole, this backdoor cavity of secrets and lies. As with all family dramas, it will all climax with blood-curdling screams.”

Synopsis: “Crisanto and Dolores’ marriage is going through a rough patch. Going through a marital crisis, a couple’s marriage is tested when Crisanto is diagnosed with early-onset Alzheimer’s disease as Dolores sinks deeper into depression. Paglisan tells the story of how a married couple attempt to survive together through fading memories and fleeting identities.”

Synopsis: “Being the legitimate son, Janus was given the stressful responsibility to take care of his father’s funeral. With the presence of a senator, constant phone calls from his mother (who was in the United States), and the conflict between his scandalous sister and his father’s mistress; the funeral became dramatic, chaotic, and hilarious. Pang MMK is about one’s strength of character, overcoming adversities, and facing them headstrong!”

Here are the twelve (12) short films that make the roster of this year’s lineup.

Cinema One Originals brings five foreign films to our turf. Check them out below:

Set in China’s underworld, this tale of love and betrayal follows a dancer who fired a gun to protect her mobster boyfriend during a fight. On release from prison 5 years later, she sets out to find him.

Lara is a 15-year-old girl, born in the body of a boy, who dreams to become a ballerina.

Chela and Chiquita, both descended from wealthy families in Asunción, Paraguay, have been together for over 30 years. But recently their financial situation has worsened and they begin selling off their inherited possessions. But when their debts lead to Chiquita being imprisoned on fraud charges, Chela is forced to face a new reality.Driving for the first time in years, she begins to provide a local taxi service to a group of elderly wealthy ladies. As Chela settles into her new life, she encounters the much younger Angy, forging a fresh and invigorating new connection. Chela finally begins to break out of her shell and engage with the world, embarking on her own personal, intimate revolution.

In 1993 after teenage Cameron is caught in the backseat of a car with the prom queen, she is sent away to a treatment center in a remote area called God’s Promise. While she is being subjected to questionable gay conversion therapies, she bonds with some fellow residents as they pretend to go along with the process while waiting to be released.

In addition, Cinema One will host screenings for the following restored classics:

Bradley Cooper’s directorial debut, A Star Is Born, opens the festival today, November 9, at Gateway Mall in Cubao. The film is a remake of the beloved tragedy about a young woman (Lady Gaga) and a country musician (Cooper) who fall in love against the cutthroat background of Hollywood.

Tickets to the screenings are priced at PHP 200. Students can purchase tickets at the discounted price of PHP 150 when they personally present a valid ID when purchasing tickets. SM Cine Lokal theaters sell tickets for PHP 150 as well.

Below are the official screening schedules for the 2018 Cinema One Originals Festival.

Note that these are subject to change.

If you want the excel sheet, please click the button below. It will redirect you to a Google Sheets link (updated should changes arise), which you can save as a local file and use to plot your festival itinerary.

Get the real-time screening sked here: