Cards and Criminals: A “Now You See Me” Review 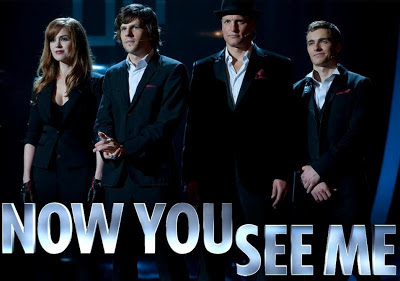 “Come in closer
because the more you think you see,
the easier it will be to fool you”
Regardless of what comes after this sentence, I will be doing my best not to tread into spoiler zone here.
First Scene. A street magician asks a female character to choose a card. Since he shows the deck to the camera, I thought I’d join in and choose one as well. The magician shuffles the deck playfully, and I chose my card just as the female character chooses her own.
Next Scene. The magician shows you a set of cards and asks if your card is there. I thought, “No, it’s not”, and the female character says the same. 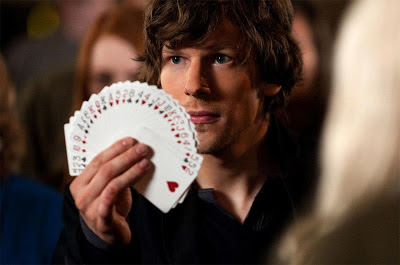 Finally, he shows the girl the card she chose in a spectacular way. I’m amazed, that was also my card!
A movie about magic and illusion starts off with a magic trick that’s very engaging it makes you think that you’re a part of the trick itself. Well done! Now You See Me makes magic look so cool that The Incredible BurtWonderstone looked so lame when placed next to it. Four magicians having their own specialties in the magical arts -Daniel Atlas (Jesse Eisenberg), Henley Reeves (Isla Fisher), Jack Wilder (Dave Franco) and Merritt Osbourne (Woody Harrelson), are brought together by an unknown and enigmatic benefactor and shown the blueprints of a series of magical acts. A year later, our four magicians are already famous performers known as the Four Horsemen, who took pride in using their popularity, illusion, and deceit in acting as modern-day Robinhoods, robbing off corrupt business leaders of their money and giving them off to their specially targeted audience. The FBI tries to hunt them down, but they use their clever tactics to get ahead of the law. As the case went on, everybody realizes that when magic is involved, nothing is really what it seems.

SM Cinema invited me to the Advanced Screening of Now You See Me last week, and I just said yes right away because I’ve been looking forward to seeing it. I’ve been getting tickets to the movies I watched online – which is very easy with SM Cinema’s online portal. If you’re anywhere in the Philippines, check out their website here to conveniently purchase and reserve your tickets to the blockbuster movies you’ve been watching out for.

Right when learned about its star-studded cast, I knew this movie’s going to be a good one. I mean c’mon, it’s got Facebook’s CEO, the Hulk, Haymitch, and Batman’s Butler, in it! Not to mention Morgan Freeman who’s just about everything. The best part about the cast though, is that each of them was able to make their own unique characters work so well with the rest that in spite of the movie being star studded, everyone had a good share of the limelight.

Aside from the cast, I believe the movie’s charm comes from three elements (it’s always three isn’t it?) – Humour, Spectacle, and the thought of Outsmarting Authority.
Humour because unlike me who was having my usual grunts at funny scenes, everyone else in the cinema were having a good laugh. Most of the hilarity came from scenes where Dylan Rhodes (Mark Ruffalo) gets outsmarted by the Horsemen. Don’t get me wrong though, the movie had funny moments all right but that’s all that it was, just moments. 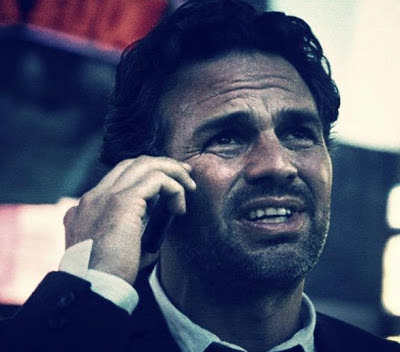 With the locus of the movie being magic, much of the entertainment factor also came from the elements of surprise and spectacle. You watch the Horsemen perform a trick, get amazed at the outcome, then be fascinated at the technical explanation of how the trick was done afterwards. The film tends to do this a lot, surprise and bedazzle you with the magical performance then keep you eager with all ears as Thaddeus Bradley (Morgan Freeman) explains how the trick was nothing but a heist done at a grand scale. If the objective of all this was to keep you glued to the screen, I’d say it’s a job well done. This is also probably the reason why for the most part of the film, we’ve been following Dylan Rhodes instead of the Horsemen themselves. The movie wants us to follow him so we can also be surprised, puzzled, and left wondering how the Horsemen did what they did. 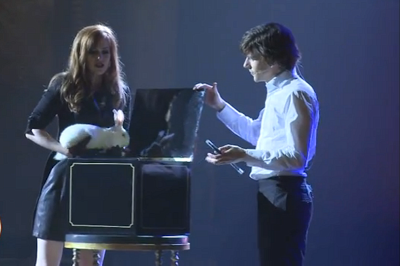 Finally, who doesn’t love movies where authority is challenged? When a small underdog outsmarts a big superpower? We take pleasure seeing the magicians get the better of the authorities, outwit the filthy rich, and eventually turn out victorious in the end.
Now You See Me relies on distraction in keeping the audience entertained. In spite of all the praises I gave for the film, I still have to say though that if you take a closer look, a lot of angles in the movie were not properly resolved and the movie ends leaving you unsatisfied and craving for more explanation. The movie gives you a fun ride and it was really enjoyable while it lasted, until you reach the end and you try to figure out what really just happened.
But regardless of the lack of resolution, it’s easy to enjoy the film if you don’t overthink it too much. Just loosen up and let yourself be taken away by the spectacle of it all. It was entertaining, clever, and I wouldn’t mind watching it again.
Credit to all the images used in this post go to the Now You See Me Facebook page, I do not own these images. No copyright infringement intended.