When a desperate thief steals from a blind man in order to give her sister a better life, whose side will you take? 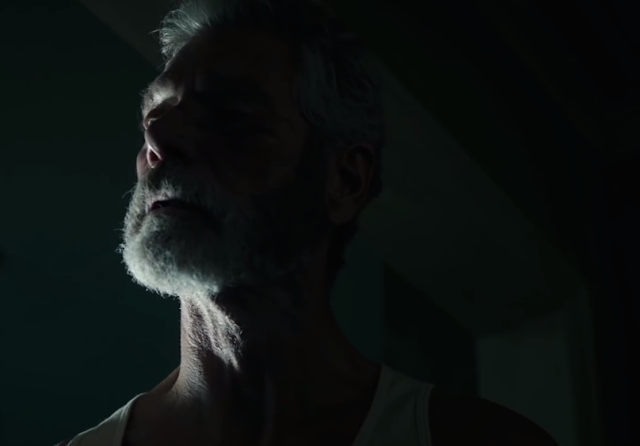 This is one of the moral dilemmas presented by Don’t Breathe, a home invasion thriller by Evil Dead director Fede Alvarez. Simply put, the film is about three young burglars who break into the home of a blind army veteran rumored to be keeping $300,000.00 worth of cash. Not long after they have gotten inside the house, they realize that they may have underestimated their target, and that there may be other dark secrets hidden inside the house other than the money they’re looking for.

I wasn’t expecting much from Don’t Breathe given that it wasn’t really making much noise online (probably because of the fact that Train to Busan was creating a much louder buzz last week). Surprisingly, it turned out to be a really good suspense flick that will make you hold on to your seats.

Imagine a home-invasion movie except that the roles are reversed – instead of the invaders preying on the homeowners, tit’s the man of the house who hunts down the trespassers. The supposedly victim of the crime turns out to be more than capable of defending himself despite his disability and the fact that he’s outnumbered. What follows is a gripping cat-and-mouse chase with lots of heart-stopping close encounters and fairly decent fighting sequences.

The film effectively plays around with our primal fear of getting caught, reinforced by claustrophobic scenes which include an impressive long take that gives you a clear view of the labyrinth of a house that the main characters would be trapped in. It’s a thriller in every sense of the word. The occasional jumps scares weren’t many, instead, what we have are gripping chases and several intense scenes where our young burglars try to make as less sound as they can so as not to be detected by their predator’s heightened senses.

But much more than action and the suspense, it’s the moral ambiguity presented by the movie that would keep you disturbed even after you have already left the cinema. Normally you wouldn’t take the side of burglars but in some way, the movie makes you hope that they get what they came for and escape safely from the house. On the first half of the movie you’ll feel torn knowing that it’s so wrong to steal from a blind man (stealing in itself isn’t right in the first place), yet why do we hope that they get out alive? Why aren’t we cheering for the handicapped guy when he’s only defending himself from kids who want to steal his money?

This dilemma was one of the best things about Don’t Breathe. It keeps the audience thinking, it keeps them engaged, and it makes them question their own moral judgment.
Until we get to a downer.
At some point in the movie there will be some sort of twist that eventually establishes our blind army veteran as the bad guy. The gray areas are now back to black and white, and the film suddenly spoon-feeds the audience, helping them decide who to root for in the movie. The film’s appeal coming from the moral dilemma it once had is all thrown out of the window, and suddenly it’s become nothing but a teen-slasher movie. It’s also at this point that you’ll realize that several of our main characters are only cardboard cutouts, and we don’t really get a good background other than the stereotypes that they’re supposed to represent.

Nonetheless, Don’t Breathe is still a bunch of fun! True, there are a few notable flaws here and there but it still definitely delivers as a suspense thriller. There’s also a hint of a sequel towards the end of the film but given the rather awkward way that it was presented, maybe it would be wise to manage our expectations.

Credits to the images and videos used in this post go to “Don’t Breathe” and/or to their respective owners. We do not own these materials. No copyright infringement intended.