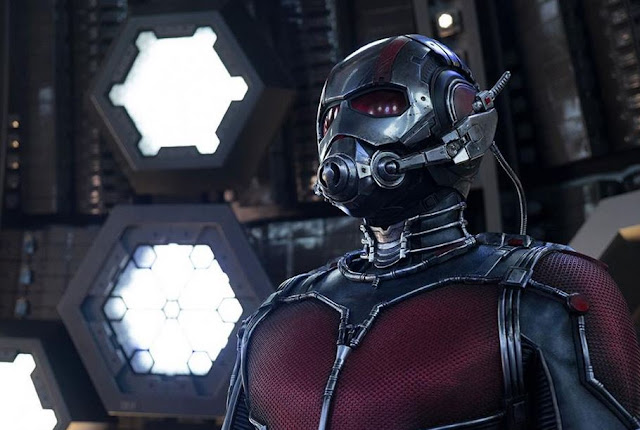 And so it looks like we have a new pair of Avengers coming up our screens pretty soon. And it’s about time don’t you think? Considering that Ant-Man and Wasp were supposed to be two of the original members of the Avengers.
Scott Lang is a good man and a loving dad – only one that robs…I’m sorry I mean “burglars” into even highly secured places whenever he becomes desperate and money becomes tough. When he finally gets out of prison, he’s commits himself to leading an honest life for the sake of his daughter. But just when he thought that his days of breaking into places and stealing things are finally over, he meets Hank Pym,  who lends him a specialized suit that allows him to change his size even to atomic levels. He must now use the suit to..well…break into a place and steal some thing, in order to save the world.

My sentiments for Ant-Man were pretty much the same as the one I had for Captain America: Winter Soldier. For me it felt like it was created just so we can have Ant-Man in another Avengers film. A Prologue, so to speak. The whole point was to give us a backgrounder for Ant-Man, and I guess to the filmmakers, as long as this objective was met, it doesn’t matter anymore if it falls short in the other departments.
Chances are I don’t share these sentiments with a lot of people since I’ve seen a lot of praises for the film online.  I won’t deny that it’s enjoyable and the comic relief definitely worked, but I was trying to look for something new that wasn’t already offered in earlier Marvel films. Now I’m not claiming to be a Marvel authority here (to be honest, I don’t know as much as others), but wouldn’t it be a breather if we have a mindfuck-ish  superhero movie for a change? I’m so used to the usual recipe of Marvel  films, that I’m actually starting to feel indifferent. Looks like I’m not really that much of a fan after all.
The action was so-so but the film redeemed itself in the humor department (which again, is really a Marvel staple). We all know that an Ant-sized superhero may not sound as awesome as a hammer-wielding Thunder God, and the film knows this so it makes this fact a part of the fun instead…and it works! It was actually pretty entertaining when the mini superhero and supervillain are battling it out hardcore, only to look so ridiculous when zoomed out.

Speaking of the superhero Paul Rudd did a pretty great job in being a cross between Tony Stark’s humor and Thor’s tactlessness.  In spite of my doubts, Paul Rudd turned out to be an awesome potential addition to the Avengers idols.
***
Ant-Man did meet my expectations, which was unfortunate because I wasn’t really expecting much. Maybe I’m just getting old.

Credits to the images and videos used in this post go to “Ant-Man” and/or to their respective owners. I do not own these materials. No copyright infringement intended.