After Airbender: An “After Earth” Review 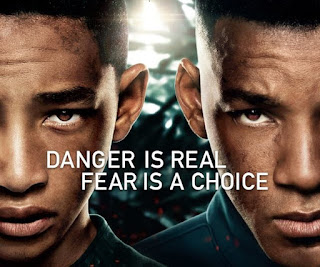 The moment I learned that After Earth was directed by M. Night Shyamalan, I immediately had doubts about watching it. “The Last Airbender” was such a disaster and it completely ruined the awesomeness of the original animated version that I swore to myself never to watch a Shyamalan film again. But then of course, I was just overreacting and I still ended up watching After Earth.
A thousand years into the future, planet Earth is already  uninhabitable to human beings (movies these days have been showing us a bleak future for humanity, yeah?) and humanity was forced to move to a new world – Nova Prime. General Cypher Raige (Will Smith) commands The Ranger Corps, a peacekeeping organization that protects humanity from other aliens who are interested with their new home. On his last voyage before his retirement, Cypher brings his son Kitai Raige with him (Jaden Smith),who is also a hopeful ranger himself. However their ship crash lands to Earth, and with Cypher injured, Kitai must now travel on his own to find the other end of their ship to retrieve a beacon that will send a signal for help. Kitai must face the now deadly environment of planet Earth as he also struggles to face his own issues with his father and his guilt for a traumatic event in his past. 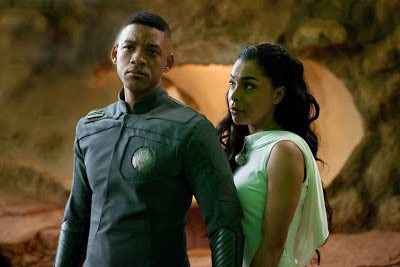 I wasn’t expecting much from the movie and I was ready to give it a thumbs-down but surprisingly, it turned out to be okay. Given that this is a Shyamalan film, “okay” should already feel like a “superb!” for Shyamalan movie standards. Don’t get me wrong, I don’t have anything against M. Night Shyamalan. In fact, I actually thought The Sixth Sense and Signs were good movies. But dude, taking The Last Airbender aside, have you seen The Lady in the Water? Yep, he directed that time-waster. Who would trust him after that?
After Earth though, was thankfully a few notches better than The Last Airbender. It wasn’t mindblowing, nor did it have any fancy twists or tricks up its sleeve, but it would fare well if we are just classifying it as a feel-good movie. Just think of it as a sentimental father and son story sprinkled with Sci-Fi, deadly monkeys, and a pinch of alien ass-kicking. It runs on a very linear plot where it basically spoonfeeds you with what goes on and what will happen so it kinda becomes boring at some point. But then again, just think of it more as a sappy Father’s Day movie and less as a Sci-Fi adventure and you’ll be okay.
I’ve always enjoyed Will Smith in his movies but this one seemed to suck out all the fun from him. The serious tone of the film had made him dull and I’ve never seen him look so old before. Jaden on the other hand, needs to show up on his acting classes a little bit more so he can learn that there are more expressions that you can do aside from the worried, scrunched-up eyebrows look that he had all throughout the movie (all throughout his career, really).
Now I’m confused. I just told you that that the movie wasn’t really that bad, but I ended up saying nothing good about it. Oh well, maybe it’s because we just came from the disaster that was The Last Airbender, that this movie felt like it was okay.
Credits to the images used in this post go to After Earth and/or its Facebook Page. I do not own these images. No copyright infringement intended.