Action and Adrenaline: An “Olympus Has Fallen” Review 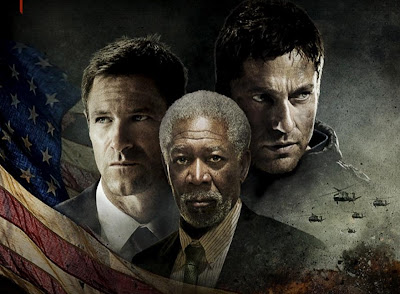 As of writing it’s already past 1am. And I should really be sleeping now because I have to be extra early for work tomorrow. But I have just come home from the cinema after watching Olympus has Fallen, and I couldn’t contain the “badass” the movie has left me feeling, that I have to put them down right away into writing, otherwise they’d just keep me awake all night!
Korean terrorists have attacked and taken over the Whitehouse. With the President taken hostage, the United States now has to give-in to the whims and demands of the terrorists. Mike Banning (Gerard Butler), a former secret service agent assigned to head the Presidential Detail, but was demoted to work at the Presidential Treasury, managed to survive and is still inside the Whitehouse when the attack took place. He’s now the only one capable of saving the president, and the only hope to stop the annihilation of the whole United States.
I’m sure I’m not the only one who would say that this film’s release has had the best timing. With the recent threats that North Korea has been making toward the United States, this movie has become very relatable! Only that the Korean terrorists aren’t just flinging empty threats to the US in this movie. Here, they actually do something, and boy they sure are good at it!
There’s the usual establishment of characters and scenario in the first part of the film, then everything that comes after are action-packed and full of adrenaline. Seriously, the movie felt like it was one huge climax all throughout! There’s badass weaponry, continuous gunfight, big explosions, and no holds barred mercilessness. Everything about the movie has a sense of urgency, and it makes you hold on to your seats hoping for the best and fearing the worst that could happen to the characters (I actually had to pee at some point because I drank too much iced tea from Tender Bob’s. But the movie just won’t let me leave my seat!). 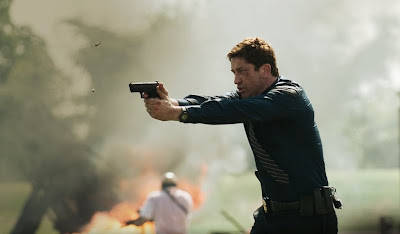 If you think about it though, the plot isn’t really new to us. We’ve had a lot of terrorist movies, prominent buildings taken over, presidents taken hostage, and it also isn’t surprising that it’s up to just one guy to save the day. Sure, the basic storyline that the movie is following isn’t very unique, but there’s something about the film that makes it rise above the rest in its genre. The execution, the energy, the unpredictability, and the right mix of actors made the film more notable than the rest of the “terrorists taking over” movies that we know.
This has got to be one of Gerard Butler’s best performances yet. He fights more than he speaks in this film, but he is very convincing in his role. I don’t think that his character’s background is well-established, but we do know enough for us to empathize with him and feel his conflict. And man, did he own those fight scenes and hand-to-hand combats! This is definitely the guy you’d be sorry not to have in your team.
I don’t usually gravitate towards action films (unless it involves some nice Kung Fu and futuristic technology), but Olympus has Fallen would be one of the notable exceptions. Ask me to watch it again and I wouldn’t say no.
Credits to the images used in this post go to the Olympus Has Fallen Facebook page. I do not own these images. No copyright infringement intended.