Old-School Scary: A “The Conjuring” Review 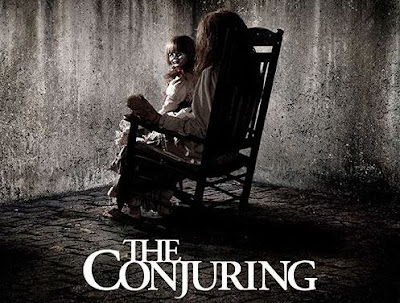 It’s always so intriguing when a film is based on a true story, especially if it’s something bizarre and out of the ordinary. There’s an added thrill and excitement to the movie-watching experience when you know that what you are seeing may have actually happened in real life, and there’s no reason why it couldn’t happen to you as well.
Based on true events reported by real-life paranormal investigators Ed and Lorraine Warrens (Vera Farmiga and Patrick Wilson in the movie), The Conjuring follows the Perron family, who has just moved to their new farmhouse at Harrisville, Rhode Island. Soon after they have settled, disturbing events occur and unseen forces start “attacking” the family members. Terrified and desperate for help, Carolyn Perron (Lili Taylor) consults with the Warrens, who then discovers the dark past of the Perron’s home, and that whatever is haunting their family definitely doesn’t want them to stay.

One look at the movie and it’s easy to tell that this is probably going to employ a lot of old-school horror tactics. I’m not saying this because the film was set in the 70s, but the fact that the movie made use of the “family-moving-in” cliché of your typical horror flick already made me set my expectations at a conservative level. As I was seeing the movie, I knew that I was right about the old-school style, but one thing that I didn’t see coming was how old-school horror can still be so effective at scaring the shit out of you.
The scoring for example, was reminiscent of the horror movies I used to see as a kid (and I’m telling you that was a loooong time ago), but the timing and execution was efficiently done, fading-in and breaking-out to you at the right and most unpredictable moments. There was also very minimal use of special effects, making use instead of ingenious concepts such as the “Hide and Clap” game, the UV Light, and the Music Box as tools for creating anticipation for scare tactics, while still leaving room for imagination of the audience at the same time.
I can’t pinpoint exactly what makes The Conjuring stand-out in its genre. Like I said, there wasn’t a lot of things that are new in this movie, and it’s actually easier to identify the recycled horror manoeuvres. The quality of the whole film felt like “The Exorcist” and “The Amityville Horror” squeezed into one. Yet in spite of the familiarity in style, the scenes are still unpredictable, and it was scary enough for me to wish, more than ever, that I had a roommate.
After all the “Paranormal Activities” that we’ve been seeing the past years, “The Conjuring” becomes a reminder of what horror really is about. It used familiar scare tactics, but they are carefully and strategically laid at the right moments. And yeah, I did mention that this was based on a true story, so you better do some good research before you get that doll from the antique shop.