In a time where we consume knowledge, even history, through our phones and computer screens, opinions about the Muslim people have mutated rather callously. In the light of the attacks in Paris, the Mamasapano fiasco, the Zionist offensive in Palestine, anti-Islam sentiments have exploded like a pressure cooker full of compounded hatred and misguided conceptions of our Muslim brothers and sisters. 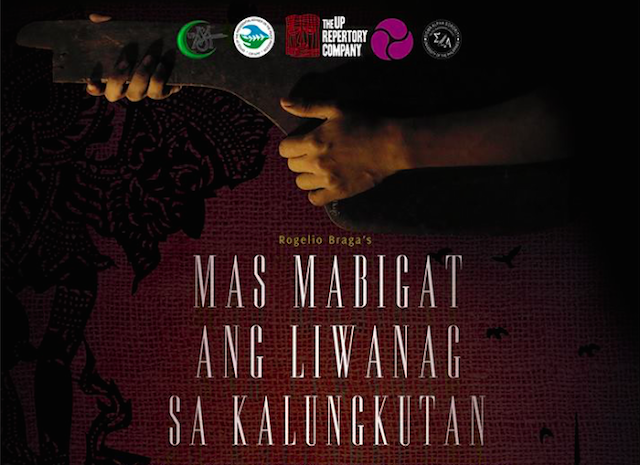 These tragedies left us shocked and worse, vulnerable. And the moment we are asked to join the wave of hashtags and support, you seem to be obliged to speak our mind under 140 characters or less. With our misplaced knowldege of history and vulnerabilty, one cannot really expect the most informed opinions.
So maybe after using #PrayforParis and #JeSuisCharlie, we may want to go back to our own history, unlearn those sanitized textbooks, and understand that the plight of the Islam people is closer to home than you think.
Withouth spinners and grandiose marketing schemes, the University of the Philippines Repertory Company (UP Rep)’s have achieved relevance and unintended timeliness. I will say this ahead of my review, the “Light Falls Heavier Than Sorrow” production has provided a historical narrative of nameless faces of the Muslim people struggling for freedom and self-determination.
Rogelio Braga’s haunting play unfolded in Mindanao at the time of President Ejercito Estrada’s All-Out-War against the Moro Islamic Liberation Front (MILF). The heroes and heroines were the children of war—Sarah, Akil, Teng, Kamad, Karim, and Mads. Their childhood and education became collaterals of an age old war. What better way to tell a story of a world so distant even for most Filipinos, but through the lives of children who sing and dance in the tune of gunfire and elegies of their slain relatives?

Carefully juxtoposed are the lives of Akil and Teng, both from the same class of Ma’am Zoraida, their high school teacher. Akil, who chose to stay in the war-torn land of Maguindanao while Teng took his chances in the University of the Philippines to get a college education. While the other struggles in the city, the other marched together with his friends to the “umpungan,” the MILF’s traning camp. This all happened months before Camp Abubakar was pulvurized by the unabted airstrikes and offensives by government troops. It wasn’t mentioned in the play, but it was 15 years ago when MILF’s stronghold fell, killing both rebels and civilians. Abubakar was portrayed not just as a military camp, but a community where Akil, Teng, and Sarah sang their dayundays.

Another protagonist, the boy Kamad centered into an elegant storytelling, supplemented with a shadow play, of how Islamized Mindanao have been assimilated and eventually lost it’s autonomy. The catharsis in those moments forces the audience to a position of anxiety. The anxiety of a nation that claimed its “identity” (or the lack of it) through brute force and inability to recognize the freedom of the Muslim people.
Another remarkable touch is Akil’s grandmother, a woman forced to bury her husband, children and love ones from one war to another. She represented the eerie fact that her story will also be the story of her children and her children’s children. The character’s emotional wounds remained painful and fresh, too fresh that the audience is confronted with the reality that the war is not over in Mindanao nor in our collective consciousness.
But watching the play now, post-Mamasapano incident, speaks volumes about our country. The first caveat is to remind us to scrutinize the Aquino government’s peace deal – a Trojan horse to amend the constitution and a means for Aquino to claim his own mark in history as the president who defined his own version of “peace” in Mindanao.
The second caveat is that a lot has happened after Estrada’s government however, the unrest in Mindanao will continue until the Muslim people have achieved self-determination. Then again, this will only be realized not just by the annexation of the Mindanao from the rest of the country but through a national liberation of the Filipino people.
As I write this, terrorist attacks are lumped up with the words Muslim and the Islam religion. No matter what, after Abubakar, Mamasapano, and even Paris, the fact remains that these incidents are carried out with the intent of setting the people against each other. And who benefits? There will be intensification of the violence of the state, maybe through an All-Out-War or through a self-serving peace agenda. Who knows? But the worst part is that we are duly set against each other, and the state announces its determination to do (more) violence.
So maybe, plays like “Light Falls Heavier Than Sorrow” give us a glimpse of own history. And, I like to believe that it can teach us the habit of revisiting our past, making us think twice before giving in to the urge to fill white boxes with words. 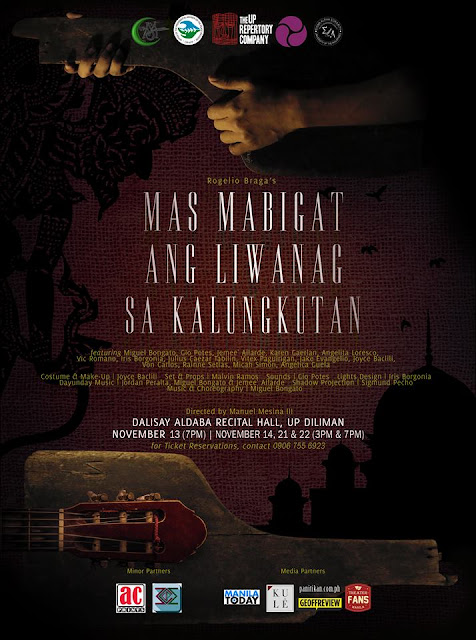 From Paris, to Maguindanao and back, nameless faces have shed blood for valid causes while some have been pawns and playthings of those who benefit from these wars. The last thing we want is to fall into xenophobia against our Muslim brothers and sisters in the stampede to join the conversation. Because when we fall for that, “they” win.
See also
geoffreview·
LifestyleTechnology
·January 24, 2014