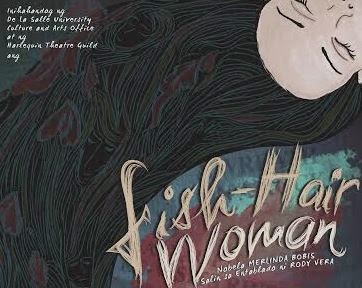 I love watching theatre plays as much as I love seeing movies on the big screen.  I have seen countless of theatre productions (and became a part of some as well) and each time, I am always reminded of my love and passion of the arts.
I am yet to see a theatre production from DLSU, which is why I eagerly accepted the invitation to see one. De La Salle University’s premiere theatre organization, the Harlequin Theatre Guild, concludes its 47th season with “Fish-Hair Woman.” It is a musical based on the acclaimed novel by Merlinda Bobis and adapted for the stage by renowned writer, Rody Vera. 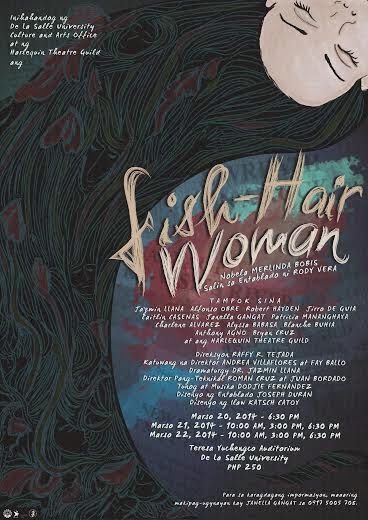 Directed by ALIW award nominee and the guild’s Artistic Director and Trainer, Romualdo Tejada of PETA, the production will put you in war-stricken Iraya. “Fish-Hair Woman” unfolds the story of Stella in the midst of the conflict through music composed by Dodjie Fernandez. The production features its intimate set-up with the theatre-in-the-round format, designed by Joseph Duran. Katsch Katoy’s design lights up the set despite the dark stories of its characters.
A cradle of corpses—a river filled with soldiers and armed forces—lies in the heart of Iraya. The “Fish-Hair Woman” floats on, consoling mourning families by retrieving bodies of their loved ones with her twelve-meter hair. Will these families find justice? Will the “Fish-Hair Woman” redeem her beloved Iraya and her heart’s peace?
Experience the grief, the horror, and the rage for yourself this March 20 (Thursday) at 6:30PM, March 21 (Friday) at 10:30AM, 3:00PM, 6:30PM, and March 22 (Saturday) at 10:30AM, 3:00PM, 6:30PM. “Fish-Hair Woman” will debut at the Teresa Yuchengco Auditorium of De La Salle University-Manila.
Ticket price is PHP250. You can get in touch Janella Gangat at +(63) 917 5005 708 if you have some inquiries.
I am giddy with excitement! How about you? What’s the last theatre production you’ve seen?