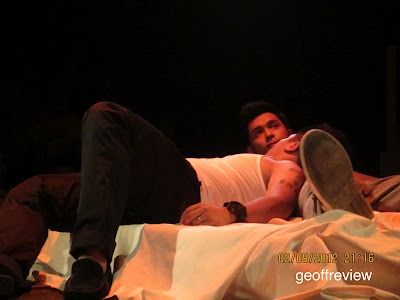 It’s been some time since I last watched a play so when a friend asked me to watch Delight/Delirium at Teatro Hermogenes Ylagan at UP Diliman, I said YES! right away.
Delight/Delirium is a collection of four one-act plays by Riley Palanca. Each play has a different director and the stories revolved around machismo, homosexuality, authority, and companionship.
Here are the plots of each of the four plays (according to how I understood them, which is subjective of course) and my take on them:
BRO
Five young boys get together for a pot session. As they get deeper into the effects of drugs, we get to know each one of them and learn of the struggles and issues they are going through with life and with each other.
This is probably the one that I would remember the least of the four plays. It’s not that the acting or direction is bad. It’s just that the story is not very memorable to me. There were witty and creative parts though (making mathematical equations for example, as a metaphor for falling in love).
VIPER
Set in a post-apocalyptic Philippines, a rebel soldier interrogates a priest for information on the whereabouts of the heart of his dead lover who by the way – you guessed it – is also a guy like himself. 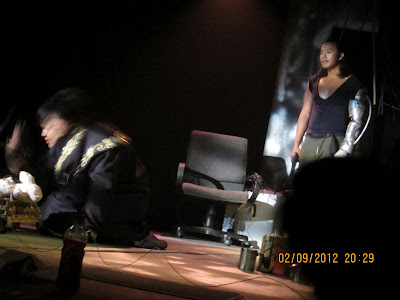 The story is unique, but I was not very much convinced by the acting. I did not feel the rebel soldier’s love for his husband. The twist was also predictable, well for me at least.  Although I loved how the dominance was constantly transferred between the interrogator and the interrogated.  The ending also leaves some space for the imagination of the audience on who died and who lived (oops, that was a spoiler right there).

One of my personal favorites! The acting was brilliant, especially by the one who played as the client. The story is simple as it only revolves around the conversation of the two characters, but the lines are so witty and natural that it makes the play relatable and engrossing. 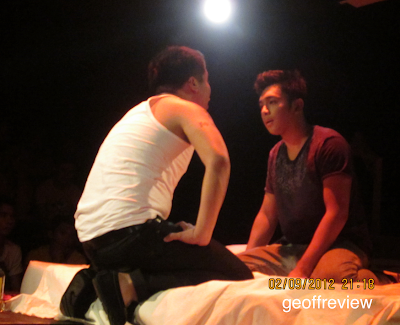 A man struggles with his relationships as the ones he invests feelings into constantly hurt him. He meets different characters and writes poems about them on a little black book based on the roles they play on his life.
I enjoyed this play the most particularly because of the main character. The acting was so natural and he gets to inject a comic relief every now and then to the otherwise depressing story. I can tell everyone else was enjoying it, even the actors themselves! 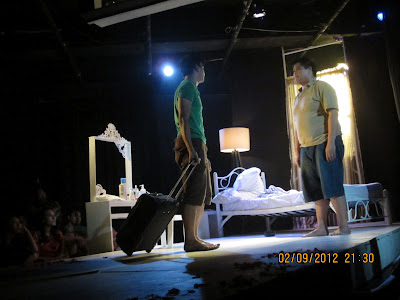 I definitely enjoyed watching the whole play. I have a feeling I might be seeing more soon.