College and Criminals: A “So Undercover” Review 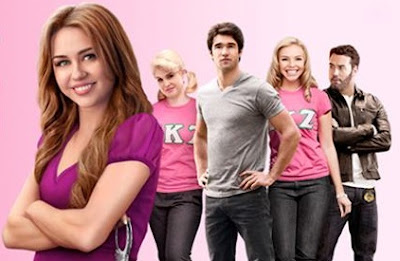 This is one of those movies I probably wouldn’t have watched if it wasn’t for free.
I’m not saying that this movie sucked so bad, in fact I’ve actually had a few laughs when I watched it in the cinema. BUT, I don’t think I’d be willing to pay to see this one.
Molly Morris (Miley Cyrus) is a private investigator tapped by the FBI to go undercover as a college sorority girl to protect a college student whose father is set to testify in court against mobsters, and who possibly holds valuable evidence against them. Going by the name Brook Stonebridge, Molly finds out this may be the toughest case she has to take on yet, as she also needs to deal with the antics of her sorority sisters and the craziness of being a college student. She looks for suspicious people around the campus who are “not who they say they are”, but is caught off guard with who she finds.
I know what you’re thinking, haven’t we seen movies like this before? Fitting-in to college, chick-flick secret missions, dumb blondes, and of course Miley Cyrus, not a single thing in this movie felt original or new – except maybe for the term “Amazeballs” which unfortunately stuck to my mind even long after I’ve watched this film.
Miley Cyrus was on her usual tomboyish and sarcastic acting in this movie. It’s as if the movie was made with her in mind for the lead instead of her adjusting to the main character of the plot. We see the same Miley Cyrus we’ve seen in her previous films. I think she’s already scared of going out of her comfort zone given that the last time she did, she ended up copying Draco Malfoy’s haircut.
The script was typical of comedic chick-flicks, but I have to admit it was witty. I especially loved the scenes, with Cotton around (Megan Park) as everything she says felt like punchlines. I was honestly getting tired of dumb blonde jokes but the ones in this movie hit the right spot, they turned out to be the redeeming factor in this film. But then again, would you really want to watch a movie that has dumb blonde jokes as the redeeming factor?
You would definitely not watch this movie for its plot. It’s a no-brainer and it’s not something that a normal person cannot come up with. Even the twist towards the end was predictable. You pretty much would guess (right) how things would turn out, like if she gets the hunk, if she’s gonna fit-in, and who the bad guy really is. Like I said, thank you for the dumb blonde jokes.
I strongly recommend that you just wait for this movie to come out on DVD, if you wanted to watch it in the first place. And be sure to rent, not buy one since I doubt that you’d be watching this several times anyways. So Undercover is funny to a certain degree, and it might sell well to its target market. But to the rest of us who are not really that much into Hannah Montana, we’ll just enjoy the popcorn and drinks.