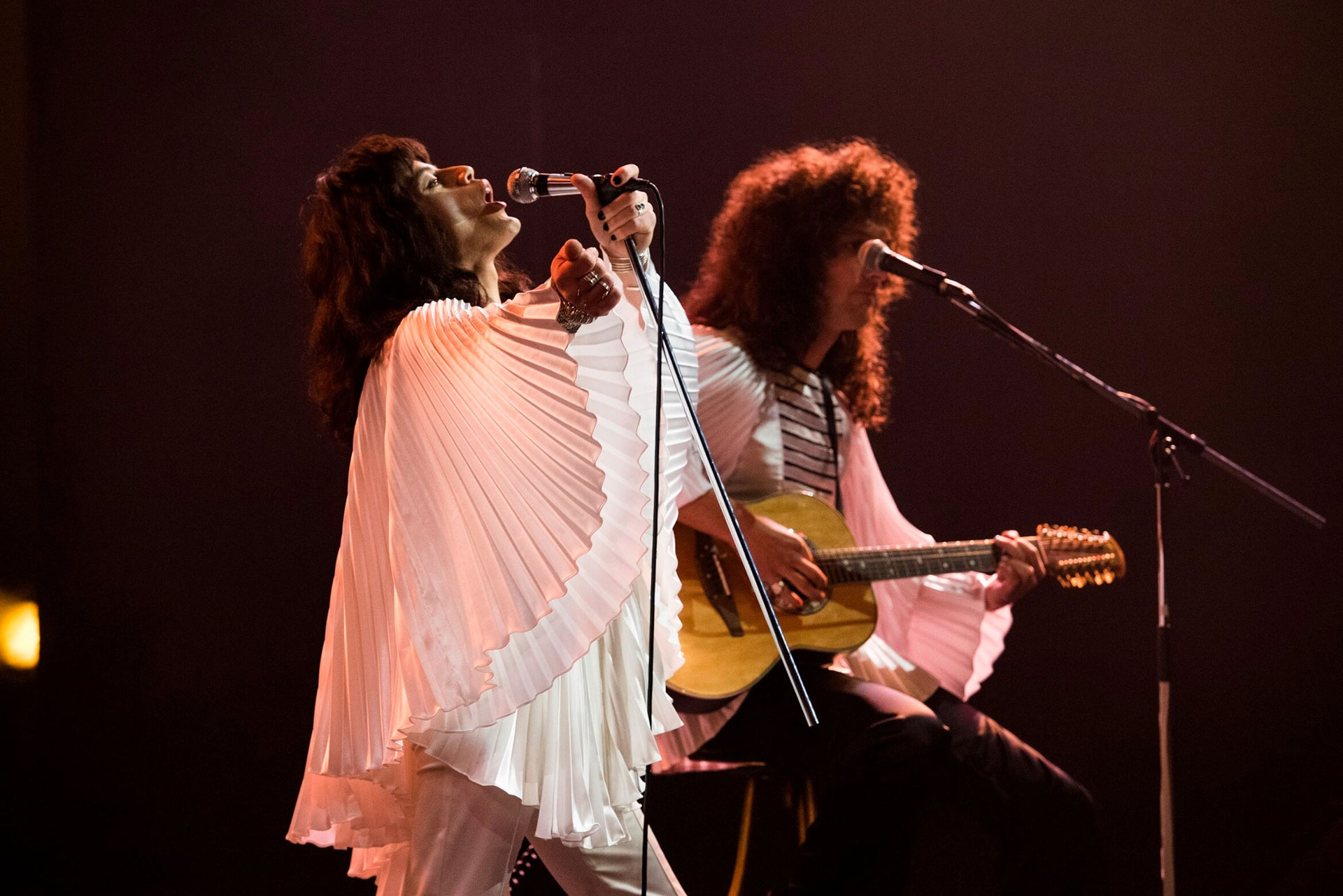 Bohemian Rhapsody” kicks off with Freddie Mercury (Rami Malek) walking to the stage to face a huge, cheering crowd at the Live Aid concert in 1985. It’s a fitting start, given how Queen’s performance in Live Aid is one of the biggest and most memorable in the band’s career. Those who are familiar with the event would know how Queen owned the stage, mesmerizing the audience with Freddie’s boundless spirit and charisma. Amazingly, the film is able to capture that energy, mirroring even Freddie’s smallest movements that at some point it starts to feel like watching footage of the actual performance.

The film is a no-nonsense celebration of Freddie Mercury’s raw talent, dwelling less on the band’s journey to stardom but savoring more the moments where they made songs and performed them. It’s like the film is in a hurry to get to the best parts (like we are) – one moment we see Freddie hauling baggage at the Heathrow Airport, and then not long after he’s already a rock star. “Bohemian Rhapsody” pays homage to Queen not by digging too deep into the characters’ personal lives, but by immortalizing the band’s best moments. Just as Freddie Mercury said in the movie when asked about his private life: “What more do you need to know? I make music.”

And really, the songs and performances are more than enough to give you goose bumps. If you’re wondering whether Malek is actually singing the songs in the movie, the answer is nope, he’s only lip-synching (although not to Mercury’s voice). But this does not take any credit off his performance, serving us Freddie Mercury with masterful passion and flair.

There is a duality in the portrayal of Freddie Mercury’s life in the film. We see him juggling two lives; one is the unapologetic rock star engaged to his longtime girlfriend, while another shows him discovering and struggling with his sexuality. My only quibble about the movie is that it portrays his bisexuality as the “dark” side of this duality, like an id drunk with fame that brought the downfall of his career. If anything, at least the film shows him embracing his self-discovery, although I would have loved to see more of Freddie as the trailblazing LGBT icon that he is.

Like its mother, “Bohemian Rhapsody” is a killer queen. A true homage to his rock highness. Like Freddie Mercury himself, the film is unapologetically eccentric and flashy, celebrating him for the icon that he is. You get less talk and drama, more rock and roll.

Bohemian Rhapsody
Takeaway
Like its mother, “Bohemian Rhapsody” is a killer queen. A true homage to his rock highness. Like Freddie Mercury himself, the film is unapologetically eccentric and flashy, celebrating him for the icon that he is. You get less talk and drama, more rock and roll.
Anticipation
Experience
In Hindsight
Reader Rating0 Votes
4