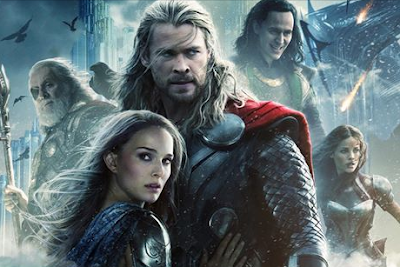 We really needed this sequel. With that open-ended conclusion to the Thor-Jane love story in the first movie (which was also so snobbishly stashed away in “Avengers”), I think Marvel really owed us a second film.
Set after the events on the Avengers movie, Thor 2 takes us back to Asgard, together with the “gods” who protect and look over the 9 realms. This time an old enemy – the Dark Elves – are awakened when Jane Foster unknowingly fuses with an ancient relic called the Aether. Malekith, the leader of the Dark Elves, intends to use the Aether as a weapon to bring back darkness to the Universe. With the convergence of the nine realms coming closer, Thor desperately asks for the help of Loki to stop the Elves before it’s too late.

Just as I expected it to, the film started out with a lot of exposition, telling us a bedtime story of how the Asgardians kicked the Dark Elves’ asses in the past and how their leaders survived, waiting for the right time to strike back. I usually get turned-off by prologue-narrations in movies because I don’t like being spoon-fed, but these types of expositions seemed to be a necessity in superhero movies, so imma let this one pass.
Thor 2: The Dark World, is a visual spectacle. This one gives us a closer look at the other realms, and allowed us to explore Asgard a little bit more for the Kingdom that it is. Even though the movie shows us that the most of the other realms were really nothing but barren wasteland, the concept of having these worlds come together was visually appealing and a whole lot of fun, especially when we were given a crossover of these worlds through messed-up dimensions (in geekier terms – glitches in the matrix).
Again, as expected, Thor 2 had the usual Marvel staples: Stan Lee’s cameo (get your eagle eyes on whenever you see old people), post-credit scenes (there’s two of them, so get your money’s worth and stay on those seats until the whole show is over!), and of course, the usual Marvel humour – which I must say still hasn’t lost it charm. There are more than a few giggly moments and it’s nice to see lots of this clever fun interjected into Thor and Loki’s otherwise dull sibling rivalry.
Thankfully, this sequel spent enough time in the Thor-Jane love team, and it graciously started this off with where the first movie left us with their budding romance. I’m not really the kind of guy who’s that much into love stories but at least this movie doesn’t leave us scratching our heads, wondering how these lovers who are literally from two different worlds are going to end up. And oh, you really must see the post-credits if you wanted a happier ending.
Thor 2: The Dark World had the usual trademarks of the recent Marvel movies that we’ve had – the humour, the spectacle, the love interest, they’re all there. It was a great sequel to a good franchise, and you’re going to enjoy this as much as the kids. Well, the ladies in fact, are having much more fun than they usually do.

Credits to the images and videos used in this post go to “Thor 2: The Dark World” and/or to their respective owners. I do not own these materials. No copyright infringement intended.